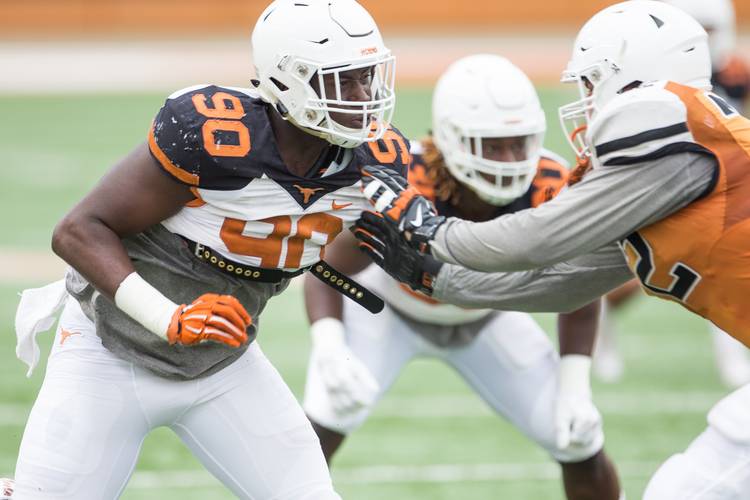 While the offense has gotten most of the run this spring, the defense also has had to make some adjustments. It’s one thing to run a play every 10 to 15 seconds, but quite another to be ready to defend those plays. Especially when you don’t know what’s coming.

“It’s way different,” safety Kevin Vaccaro said. “Last year, I felt like during practice, they were more predictable whether it was reading splits or whatever.  This year it doesn’t matter where they line up. It’s different.”

It wasn’t a day for the defense. Shane Buechele became a legitimate candidate to win the job.  The defense gave up 299 passing yards to the freshman while running backs Chris Warren III and D’Onta Foreman combined to run for 174 yards and a pair of scores.

Saturday wasn’t about getting consistent stops because it’s taken a while to simply adjust to the tempo that the offense is putting down. There will be plenty to scheme once Bedford gets the entire freshman class in along with injured veterans Jason Hall, Dylan Haines, Dalton Santos, Bryce Cottrell and Derick Roberson.

“We were able to get aligned,” head coach Charlie Strong said. “We gave up some big throws there, but even when the ball hit with (D’Onta Foreman and Chris Warren) making those runs, it was more about guys just getting wiped across the gap.”

Strong added he wasn’t pleased with the defense giving up some big throws, but there is plenty of time to get those issues fixed. Getting lined up and diagnosing tendencies from the offense is the most important part of getting ready for the fall. A lot of the on-field diagnostics will fall upon the shoulders of linebacker Malik Jefferson, who is definitely up for the challenge.

“They got us a couple of times this spring,” Jefferson said. “There’s no officiating out there, so practice is the perfect way to practice it.  It make you think a lot faster and a lot harder, so you have to be really responsible for everything.”

Lining up will become second nature by the fall. Let’s hope the same for getting stops.