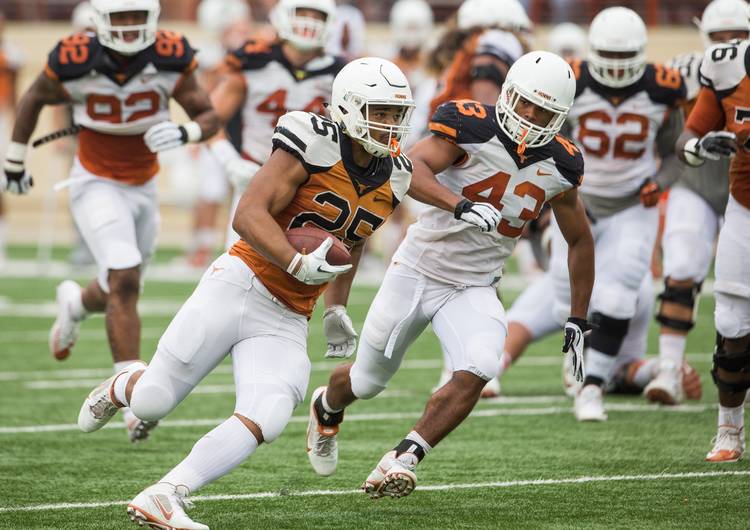 The Longhorns are going to run plays in quick time this fall.

The quarterback? Who knows?

It could be senior Tyrone Swoopes, who is more likable by the fan base as a short-yardage option off the bench.

Could be Jerrod Heard, who slipped into mediocrity after debuting with a VY-like 527 yards against Cal.

Could be newcomer Shane Buechele, who made spring football sexy with 299 passing yards and a pair of touchdowns in two quarters Saturday.

Whoever gets the nod — be it the aforementioned trio or Kai Locksley’s travel agent — there shouldn’t be a rush to make the signal callers the No. 1 option.

We all know different, don’t we?

To run plays in quick time takes on a different meaning on the Forty Acres because ‘run’ is the operative word.

The Orange-White game was a great indicator of what you can expect when the Horns take the field this fall. D’Onta Foreman left. Chris Warren III right. A huge dose of both up the gut.

“We need to turn around and hand that ball off,” said Charlie Strong. “If we need to throw it, we will throw it, but let’s ride those hulking guys until we can’t ride them anymore.”

We know the advent of the spread attack has put more of a premium on the quarterback position to make things happen, particularly in the Big 12 where the conference has produced superstars like Vince Young, Sam Bradford, Colt McCoy and Robert Griffin III in recent years.

Those big names notwithstanding, the changing tide in offense shouldn’t preclude new offensive coordinator Sterlin Gilbert from rolling hard with a pair of Brahma bulls in the backfield.

“It brings an aspect to your running game that a lot of people don’t have,” Gilbert said. “We are very fortunate with those two guys. We are obviously going to be utilizing them on our offense, and just being a part of the process of trying to win every Saturday.”

You don’t need me to tell you that this is a make-or-break year for Chuck Strong, who just hasn’t put enough offense on the field to scare anybody in the Big 12 his first two seasons. Strong is from the old school where a good running game always set up the pass but his version of Ground Chuck hasn’t added up to winning campaigns. These runners may bring enough to keep the chains moving while keeping opposing offenses off the field.

Bringing in Gilbert was Strong’s way of saying it’s time to change it up. A quicker tempo would presumably produce more points on the scoreboard (we’ve heard that one before) and after recent events, some of you are already envisioning a Buechele-led offense that’s throwing it 35-40 times a game.

Not here. At least not yet.

The possibility of a freshman manning the QB position only makes these running backs even more important in the grand scheme and just as critical in the leadership department.

“I’m being biased to the room I’m in, but of course us running the ball is one of the best things on this offense right now,” said the 238-pound Foreman. “I feel like this offense can be dominant no matter what we do, but I feel it will start with the run game.”

We’re still months away from the season opener, but the spring game was a nice snapshot of what a successful offense would resemble: Ground Chuck with some Baby Boo mixed in though I still haven’t given up on Heard returning to form.

The Horns return the Big 12’s scariest rushing duo this side of Oklahoma’s Samaje Perine and Joe Mixon. Foreman ran for 681 yards and averaged 7.2 yards per carry over 10 games. He is one of only four players with multiple runs of 80-plus yards last season. His 27 yards in negative yards in 10 games speaks to the physical nature in which he runs the football.

Warren rolled over Tech for 276 of his 470 yards and had fresh legs at the end of the season as Foreman and Johnathan Gray handled the bulk of the rushing duties for most of the season. His 51-yard scoring burst in the spring game showed good speed for a man listed at 6-foot-2, 255 pounds.

“You have to have a strong game to change the pace and beat down the defense,” Warren said. “I wouldn’t say we’re dependent on us as a running group but it’s definitely a possibility. If need be, we could lean on D’Onta and myself.”

So you would be confident if you two had to run it 50 times in a game, Chris?

The quarterback answer will be revealed in time but Texas fans should be comforted in knowing this offense will feature a running of the bulls come the fall.

Golden: For the Texas defense, it’s about getting stops, not breathers