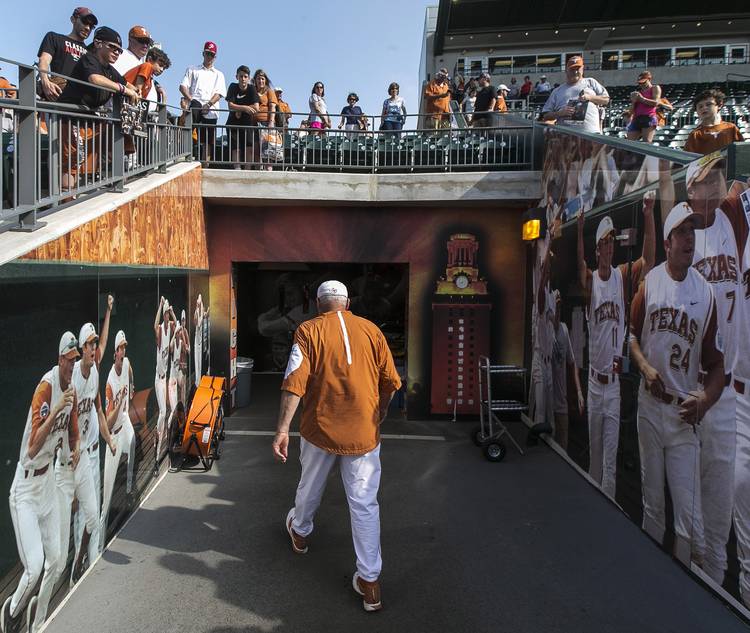 As the Texas Longhorns limp into the Big 12 Tournament with only two wins in their last 11 games, the winningest head coach in the sport’s history is about to come face-to-face with his coaching mortality.

And it’s not in his favor.

His team won a Big 12 home game for the first time in over a month Saturday afternoon in what could have been his final appearance at Disch-Falk Field. When asked if that thought had crossed his mind, Garrido said, “Sure it has. We all know what the rumors are. I’m old, not stupid.”

The coach who penned the program’s mission statement “Omaha is mandatory” stated for the second time in a week that he has no plans to retire because he still believes he can turn things around.

Of course he does. If he didn’t believe, he wouldn’t be Augie Garrido.

Sure, he desperately wants to finish out the final year of his contract which would give him an opportunity to reverse the program’s fortunes and possibly reach the 2,000-win mark with 28 more victories.

You can’t blame him there, but the program has fallen into an abyss of mediocrity that’s well below the lofty standards he set when he was winning championships in the last decade.

I’ve usually agreed with whatever Augie was putting down over the years. After all, my time covering his teams from 2003 through 2006 was the most fun I’ve had on a Texas beat.

Today we sit on opposite ends of an opinion.

I believe the program he has piloted for 20 seasons is in need of new energy at head coach.

The current 22-30 team doesn’t appear capable of putting together four wins at the Big 12 Tournament to back in into the NCAAs for the second straight year. Even if the Horns find a way to put together such a streak — something that hasn’t happened around here since March of last season — it won’t reverse the downward spiral we’ve witnessed of late in this program.

Garrido said he wants to be judged on his entire career and that’s fair. His record speaks for itself and his legendary status is secure no matter what happens in Oklahoma City. He’s a coaching icon with nothing left to prove and I can’t blame him for not wanting what has easily been the worst season of his Texas tenure to be his last.

The decision isn’t his to make.

I agree, so when I went about examining his tenure, I divided two decades into five-season increments. The period between 2002 and 2006 was his peak, with four appearances in the College World Series, two national titles, three finals appearances, and four 50-win seasons. Conversely, the last five seasons have been his worst with a 155-124 overall record, and an abysmal 55-65 mark in the Big 12. That includes a drought of zero regular-season conference titles that stretches back to 2009.

Augie would be the first to say those numbers just don’t cut it. For whatever reason, be it big misses in recruiting, the very real possibility that players have tuned him out over the last two seasons, the 2012 firing of long-time hitting coach-recruiting coordinator Tommy Harmon, or the ill-timed injuries that have hurt the team over the last couple of seasons: it just isn’t working.

Garrido was the one coach from the Mack Brown-Rick Barnes old guard that survived the Steve Patterson-Bill Powers marriage. Mack was largely in denial before his departure as his Horns fell out of the national title conversation in the four years after losing to Alabama in the 2009 championship game. Barnes’ basketball program grew stale amid personality conflicts with players and seven straight years that didn’t yield a Sweet 16 appearance.

The difference in the three is Augie won’t be surprised if the administration relieves him of duty following the season. He acknowledges the possibility that the decision has already been made to cut him a $300,000 buyout check and seek new leadership at the Disch.

To his credit, Augie is scrapping and clawing to come back for one more year.

I admire his will and his spirit. Shoot, I greatly admire the man.