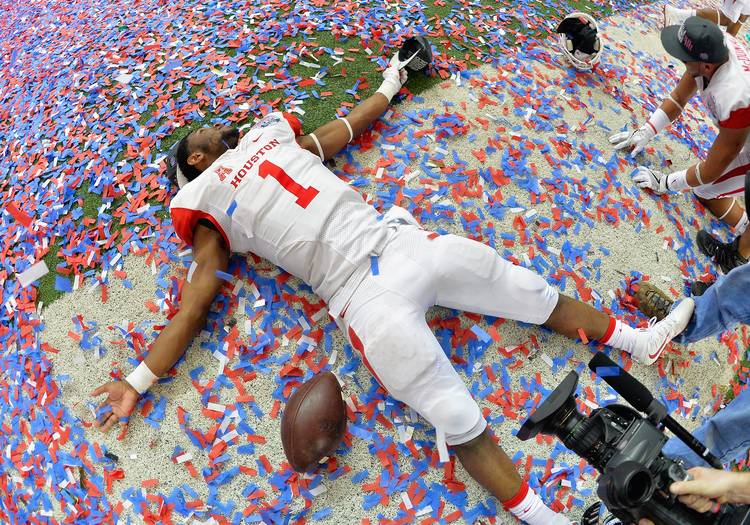 ATLANTA, GA - DECEMBER 31: Quarterback Greg Ward Jr. #1 of the Houston Cougars celebrates their 38-24 win over the Florida State Seminoles during the Chick-fil-A Peach Bowl at the Georgia Dome on December 31, 2015 in Atlanta, Georgia. (Photo by Grant Halverson/Getty Images)

Times have changed. And schools have, too.

Same goes for conferences, some of which need change.

Say goodbye to the old-school Houston Cougars, the one-time commuter school, play in dingy-Astrodome school, the one-step-ahead-of-a-junior college school. Oh, they had a Heisman Trophy winner in Andre Ware at the helm of the Run-and-Shoot. Shoot, before that, they had hugely successful veer inventor Bill Yeoman. And we all remember how Phi Slama Jama Shoulda until Lorenzo Charles’ layup stunned ‘em in ‘querque. UH has always killed it in golf and track.

But you knew ‘em as Cougar High.

Houston has gradually morphed into a trendy, on-the-rise school and ascendant athletic program. Its academics are improving beyond its current U.S. News’ 187th national ranking with first-tier research status and a Phi Beta Kappa chapter. Only Texas A&M has more beds on campus than UH’s residential campus.

The Coogs have another Heisman Trophy candidate in quarterback Greg Ward Jr. and a hot coach in Tom Herman — whom every school with a vacancy has on speed dial — and a huge investment of $240 million in its athletic infrastructure. Kelvin Sampson hasn’t exactly turned around the hoops program, but is a proven winner, albeit with a sketchy NCAA past. Golf churns out national championships like butter, and Carl Lewis lends his name to the rich track tradition.

“The value of the University of Houston in my eyes, first and foremost, is the Houston TV market,” said the Cougars’ sharp athletic director Hunter Yurachek. “UH brings a great deal with what the census will show is the nation’s third largest city and a top-10 TV market. And there’s been a rebirth with $1.5 billion of capital improvements.”

The Big 12 has long contended it already owns that television market, but last year’s numbers show the six top-rated football games in Houston were SEC games, two were Cougars games and two were Big 12 contests. But it’s a small sample.

“With A&M leaving the Big 12 and going to the SEC,” Yuracek said, “it has become an SEC market and UH city over a Big 12 city.”

And no one can question the rise of Cougars football. They went 13-1 last year, pummeled Florida State in the bowl game and open with Oklahoma this fall perhaps as a top 10 team.

What really excites Herman is his American Athletic Conference, which had four teams ranked at one time last season and has positioned itself as the top non-Power 5 league.

“I think we’ve separated ourselves,” Herman said. “If you win the AAC, you’re going to a New Year’s 6 bowl game. So we’re talking Rose Bowl, Fiesta Bowl, Cotton. We’re really happy where we’re at. And we’re improving our facilities to a point they are as good as there are in the country for a school at this level and probably better than a lot of schools in Power 5 conferences. We’re in a great place.”

But should be considered for a greater place.

No longer is this the school that prompted one Cotton Bowl exec to complain about having to accept the Cougars because “half their fans are robbing 7-Elevens and the other half are eating there.” A damning quote if ever there were one.

Today, Houston’s not going through convenience-store doors as much as it is banging on the Big 12’s.

And the Big 12 needs to seriously consider letting them enter.

Red McCombs is behind Houston. The Longhorns donor said the league should have invited Houston two years ago.

Drayton McLane is in the Cougars’ corner. “Houston doesn’t bring a new market. But I think Houston is very deserving,” Mr. Baylor Bear McLane told me. “It’s the third-largest school in the state, has great alumni and a huge market. I think it ought to be considered.”

Texas has been characteristically mum about expansion, but my sense is most Longhorns fans condescendingly oppose inviting UH.

A high-ranking Texas official told me Friday, “Texas will officially be for it. Realistically I cannot see getting seven votes in favor, however. The six out-of-state schools have zero interest in adding another Texas school.”

But do those schools favor survival? A Big 12 AD told me UH has “a little chance.”

Expansion may or may not be the answer for strengthening the league. None of the schools bring overwhelming sizzle or move the needle a great deal.

The chairman of the UH Board of Regents told CBSsports.com he believes the Big 12 is scared of the Cougars. If that’s true on the surface, isn’t that a good? It would mean the school brings a lot of value to the Big 12. It’s a valid point, but there’s more to it.

I do think the Big 12 is scared of empowering Houston and thinks the Big 12 would bring more to Houston than vice versa in terms of recruiting exposure, brand cachet and, of course, money with an extra $25 million or more to the Cougar coffers. You can take that to the bank.

“Absolutely, that’s right,” one prominent Cougar official said. “But bring ‘em on. We’re beating ‘em on recruits now. Imagine if we have $30 million a year more in budget, we’d be a monster. We’ll print up T-shirts with a Big 12 logo. I think adding UH makes sense from every angle except competition. They might be worried about bringing in a team that potentially can dominate the conference.”

Yes, but isn’t that what the Big 12 should want? Better that than inviting a couple of pansies to join.

When I asked one Big 12 athletic director about potential expansion candidates and asked him the biggest obstacle of, say, BYU, he said, “Geography.”

Yes, BYU sits almost 900 miles away from Texas Tech. But if geography represents BYU’s No. 1 impediment, by that same argument, wouldn’t Houston’s proximity be a No. 1 positive?

UH is close by. But is it close to being invited?

RELATED COVERAGE: BYU longs to be the Big 12’s expansion pick to click

Golden: KU has virtually no voice in football-centric expansion debate