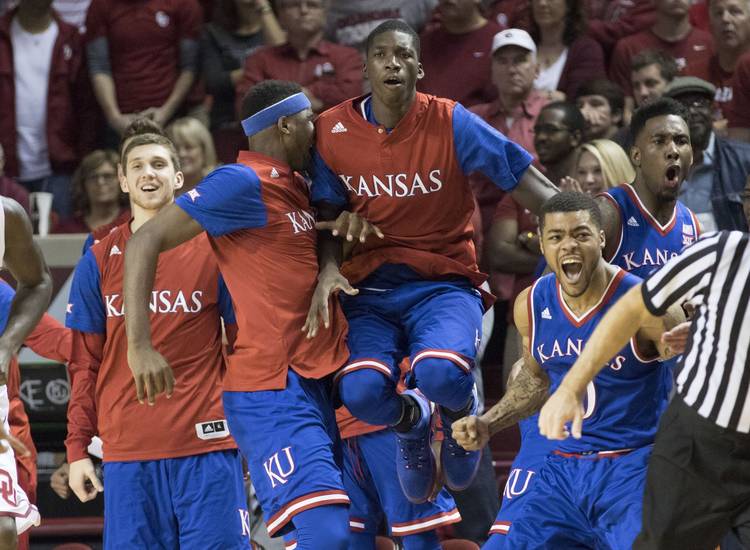 While basketball is Kansas’ marquee sport, it doesn’t carry much clout in this week’s Big 12 meetings in Irving. The Jayhawks, which has won 16 regular-season Big 12 championships, will get a vote, but this is a football debate. CREDIT: J Pat Carter/Getty Images

Conference expansion is the main course in this week’s Big 12 meetings in the Irving.

So what’s on the menu?

Everyone will have a take on the viability of a conference title game.

And if we’re lucky, Texas AD Mike Perrin may even grant the American-Statesman a rare interview.

Here’s what gets lost in all of this. Most of the schools are basically hoping it all works out to keep the league in business because they do not carry the game-changing clout of the big dogs, Texas and Oklahoma.

Translation: they don’t produce as many greenbacks in the sport that matters most.

Need I remind you that this thing is all about football.

That’s where you get the separation. Schools like Kansas are basically left holding the bag because they don’t bring the football power base of an Oklahoma or a Texas.

Kansas wouldn’t want to be called a little brother to the gridiron monsters in this conference but when one compares its football resources to an OU or a UT, names like Frank Stallone and Fred Claus are sure to crop up.

Which makes KU such an interesting story. The school gets a vote at the table just like everybody else but if things go south and the Big 12 dissolves, the biggest stories will involve where Texas, Oklahoma, and the other good football programs will end up.

Once again, this is a football issue and that’s where the Jayhawks, the best basketball program in the conference, are relegated to the kiddie table each fall.

Since the school began playing at least 10 games per year in 1942, Kansas football has produced only tw0 seasons of 10-plus wins, the most recent coming in 2007 when Mark Mangino coached the Jayhawks to a 12-1 mark and a 24-21 Orange Bowl win over fifth-ranked Virginia Tech.

It was a watershed moment for KU football, which would have played for a Big 12 title had it not lost to Missouri in the regular-season finale played in front of 80,000-plus at Arrowhead Stadium. The program went 3-1 in bowl games under Mangino and finished 50-48 in his eight seasons but his acrimonious departure amid a 2009 collapse after a 5-0 start and charges of player mistreatment, brought with it a change in fortunes.

It’s also part of what makes Kansas such an interesting story. While football occupies the bottom of the conference pecking order, KU basketball is right up there nationally with Duke, North Carolina, UConn and Kentucky when you’re talking about a present day Mount Rushmore conversation involving current hoops programs.

Other schools in the conference have produced great players like Kevin Durant, T.J. Ford, Blake Griffin, and most recently Buddy Hield, but we all know the Big 12 team train starts and stops in Lawrence. Three national titles, 16 regular-season and 10 Big 12 tournament titles, including a current streak of 12 straight. Those numbers speak volumes. Then there’s Bill Self, who is arguably the best hoops coach in the country.

To that end, I reached out to the Kansas administration in hopes of securing an interview with athletic director Sheahon Zenger and Self to discuss this issue, but the school took a pass on an interview.

“We believe that the best course of action, for KU and the Big 12, is to let the discussions continue and to let Commissioner Bob Bowlsby be the voice of the Conference,” a school spokesman emailed me. “There will be a time that comment from Kansas is appropriate; we do not believe now is that time.”

Kansas is smartly playing its position.

It understands the football schools will speak soon enough.

Golden: The end of the Kevin Durant-Russell Westbrook marriage in OKC?