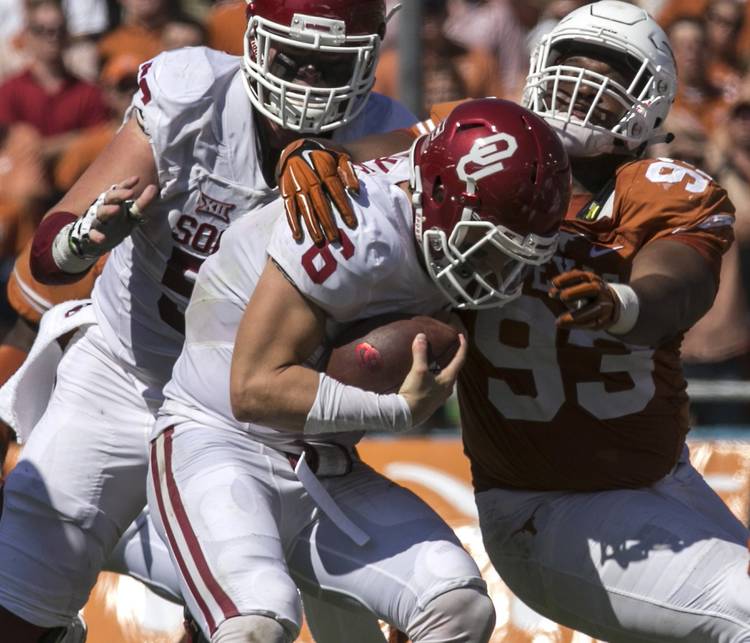 They’ve played each other in football 110 times.

This fall at quarterback they might have a Baker and a bushel. Or a Buechele.

They play in a neutral-site stadium, but there’s nothing neutral about either side.

There’s so much colorful history and rich tradition between Texas and Oklahoma that you’d think they are downright inseparable.

Could Texas and Oklahoma file for divorce, citing irreconcilable differences (i.e. Longhorn Network)? Not likely, but we’ve seen the Longhorns lose rivals like A&M, Arkansas and Nebraska, so anything’s possible. One very influential Texas source told me Monday “there is a chance (his school could give up the LHN for a Big 12 network but) my guess is it would only be to join another conference with an established network.”

And neither could leave until after 2025 without tons of litigation.

Both schools flirted with the Pac-12 not long ago, and Oklahoma president David Boren may still be infatuated with the ivory towers of Stanford and Cal. Texas eyed the distant Pac-12, sized up the ACC with its more friendly time zones and contemplated the Big Ten. For now they’re bound by a grant of rights for TV money and history and fear of the unknown.

So could the two leave for different conferences?

“I’m not sure we would like it,” OU athletic director Joe Castiglione told me. “But possibly. But I certainly don’t see a day where we’d stop playing each other. People would fall off their burnt orange and crimson stools if we did.”

Since one-year Texas President Gregory L. Fenves and nine-month AD Mike Perrin aren’t showing their hands, it’s hard to know where Texas stands. But one heavyweight at the school told me Texas and OU would never stop playing. He also said if the league held the Longhorns’ feet to the fire about the polarizing LHN, Texas would look elsewhere when the grant of rights for first-tier TV money expires in eight years.

But make no mistake. Texas and OU have huge impact on any league decisions to expand, add a conference championship game, consider a league network and decide paper or plastic when the league meets this week in Irving.

Like it or not, Texas and Oklahoma are the big dogs of the Big 12, and as one Big 12 school athletic director told me, “We all know they’re the big dogs, and the big dogs got to eat first.”

And so they will. They’d be the only two schools assured of soft landing spots in other leagues.

Mike Gundy and Gordon Gee can rattle their cages all day long, but as Texas and OU go, so goes the Big 12. One of them leaves the conference, and it’s dead in the water. One exits, and the other powerhouse has no other choice but to depart. And that would leave eight Big 12 weaklings — sorry, but on their own, they’re virtually powerless — scrambling for cover. Should Texas and OU leave, it wouldn’t be hard to imagine the other eight siding with the American Athletic Conference for television money and survival.

So what do Texas and OU want? Stability, a stronger league and better positioning on the national landscape with more revenue.

And does Castiglione think both want the same things?

Many will tell you for all the talk of a league withering on the vine, all the Big 12 really needs is for Texas and OU to, well, be Texas and OU. The Sooners are holding up their end of the bargain. Hey, they made it to both Final Fours in football and basketball. Baker Mayfield, the best two-time walk-on football player in the history of the world, flirted with the Heisman Trophy. Buddy Hield did more than flirt. He was the Wooden Player of the year.

Neither OU team sealed the deal, but they were a far cry better than the Longhorns, whose goals for 2016-2017 are to — gulp — make a bowl game and the second round of the NCAA Tournament. All they need is a quarterback and a frontcourt. Double gulp. OK, so Texas is lagging way behind in propping up the league.

And how does OU feel about adding members?

“We’ve never had a single conversation, not one about any of these schools,” Castiglione said. “We’ve not even got close to vetting one school over another.”

What we do know is Texas and OU are good for each other. Rivalries remain the lifeblood of sports at any level.

“As much as we are rivals and always pushing for strengthening our own programs, we want to beat the heck out of each other,” Castiglione said. “We have found ways to find common ground far, far, far more times than the narrative. More times than not, Oklahoma is good for Texas and vice versa.”

Golden: Texas baseball will go on, but there was only one Augie Garrido