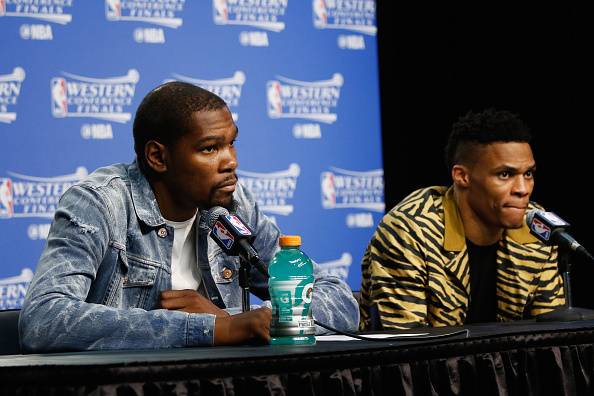 OKLAHOMA CITY, OK - MAY 28: Kevin Durant #35 of the Oklahoma City Thunder (L) and Russell Westbrook #0 look on during a press conference after the Golden State Warriors defeated the Oklahoma City Thunder 108-101 in game six of the Western Conference Finals during the 2016 NBA Playoffs at Chesapeake Energy Arena on May 28, 2016 in Oklahoma City, Oklahoma. NOTE TO USER: User expressly acknowledges and agrees that, by downloading and or using this photograph, User is consenting to the terms and conditions of the Getty Images License Agreement. (Photo by J Pat Carter/Getty Images)

A loss to the defending champs in tonight’s Game 7 could signal the end of Kevin Durant’s partnership with Russell Westbrook in Oklahoma City.

They proved to the doubters during the regular season that they could indeed co-exist and make great things happen in OKC.  Russ made All-NBA first team while KD made the second team. They finished fourth and fifth, respectively, in the MVP voting, behind Stephen Curry, Kawhi Leonard and LeBron James.

Westbrook led the league with 17 triple-doubles and showed a willingness to pass the ball to KD at crunch time, something that had been lacking in recent seasons. The momentum continued through the playoffs where the Thunder, led by an inspired Westbrook, ousted the second-seeded San Antonio Spurs in the second round then took a 3-1 lead over the favored Golden State Warriors in the Western Conference Finals.

And with about five minutes remaining in Game 6, the Thunder held a 94-87 lead, well on their way to eliminating the team that set a league record with 73 regular-season wins.

Then it happened. A collapse of epic proportions. The Thunder got rolled 21-7 down the stretch and the team’s two best players combined for only two points and six turnovers in the last four minutes. Worse yet, they combined to miss 38 field goal attempts while the rest of their Thunder teammates attempted only 32 shots. Charles Barkley said at the half that hero ball would get them beat. Chuck, who picked the Thunder to win this series, was correct in his assessment.

So is this it for the Durant-Westbrook Thunder, who aren’t expected to win in Oakland in Game 7 tonight? Will Durant leave bigger money on the table by departing to sign with another team? Was the Game 6 meltdown proof that these two can never win a championship together?

Durant should stay. Billy Donovan is a smart enough coach to help these two lead the team to a championship in the future. At their relatively young ages — Durant is 28 and Westbrook is 27 — this is no time to split up, especially when they are part of the best young team of athletes in the league. Steven Adams has developed into one of the best young big men around. Dion Waters is thriving after being lost in Sacramento. Serge Ibaka isn’t spectacular but he’s a decent stretch four who can block some shots. Enes Kanter is a nice energy guy off the bench.

They can win together because of Westbrook’s maturation at the position. Before he started turning the ball over in the last part of the game, Westbrook had been the best player in these playoffs, followed very closely by lava man Klay Thompson, Durant and LeBron. If he goes back to the form that got the Thunder that 3-1 lead, an upset in Game 7 is entirely possible.

Durant and Westbrook seem to get along fine off the court as well. They’re not at each other’s throats like Shaq and Kobe were with the Lakers. Unless KD just wants a change of scenery, there’s isn’t much reason to leave OKC now that he’s seen how good this group can be. Besides, they could still win tonight and advance to the Finals. It wouldn’t be the first time they won a playoff game in Oakland.

I’m not picking them, by the way. I bet Kirk Bohls lunch during the first quarter of Game 5 that Golden State would come back from 3-1 down to win this series.

So stay in OKC, KD. This season has shown that a championship could happen with you and Westbrook on the same squad.

Golden: KU has virtually no voice in football-centric expansion debate