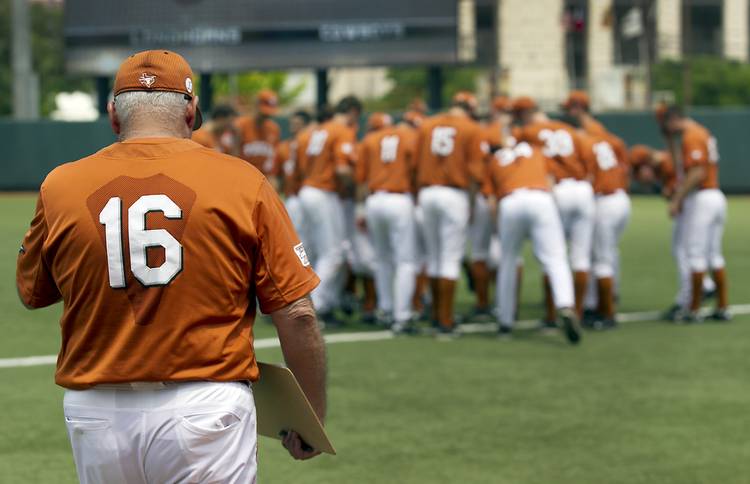 Texas head coach Augie Garrido walks out to field before the start of the game to gather his team on April 27, 2014. (Ralph Barrera/American-Statesman)

He’s easily the most unorthodox coach I’ve ever been around.

Augie Garrido wasn’t just a baseball coach. He was a baseball life skills coach. He knew his ball, but never really broke down the Xs and Os of the game with the media. Reason being he was much more comfortable explaining the game through the lens of humanity — the ups and downs that life presents, the challenges one has to overcome, etc.

And it wasn’t a load of bull. Augie studied motivational concepts, read the great philosophers and went about the business of winning baseball games in complete outside-the-box fashion.

Come to think of it, the box was nowhere to be found.

He was one part baseball coach and one part philosopher, with a Fort Knox of a heart beating underneath the left side of his No. 16 baseball jersey.

I guess the thing that made Augie so easy to like during my time on the beat was his unique ability to disarm the listener while teaching them something at the same time. He would crack some funny line at a presser, and amid all the laughter in the room, you would realize that there was a real point to the joke.

Add to that, he had this impeccable timing that somehow made time stand still at the most crucial moments.

During the 2005 College World Series, first baseman Chance Wheeless was in extreme pain because his left shoulder kept popping out of joint. Garrido thought about pinch-hitting for him in the ninth inning with the score tied 3-3 against Baylor, which had swept Texas in the regular season. Wheeless insisted he could swing the bat, despite a couple of painful attempts in his previous plate appearance. But Garrido let him, over the disagreements of a couple of players in the dugout.

Wheeless walked to the plate and sent Baylor home with an epic walk-off blast into the right-field stands at Old Rosenblatt Stadium.

“The kid wanted to be a hero,” Augie told me later. “Who was I to deny him that opportunity?”

The wins came and lives were changed for the better under Augie. The program will go on and games will be played in 2017 under a new coach, but it won’t be the same.

There’s only one Augie.

Bohls: For the Big 12, will it be more Texas-OU fight or flight?