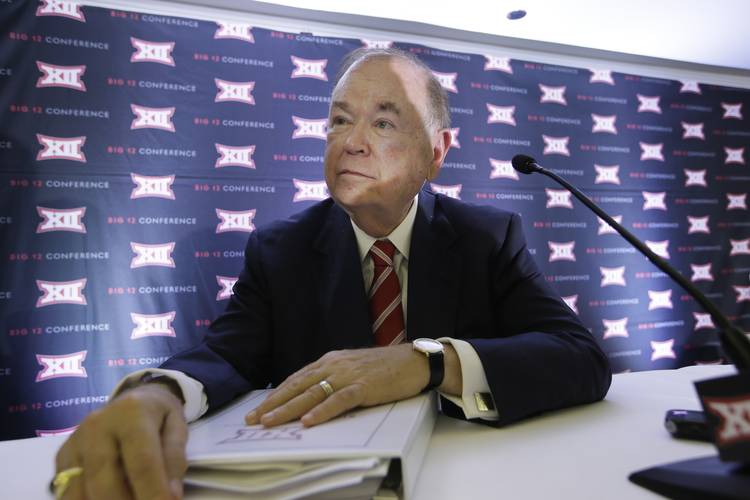 IRVING — David Boren may not hold all the cards when it comes to the Big 12’s future. But the Oklahoma president probably holds half of them. And you-know-who holds the other half of the deck.

Boren played his latest hand Thursday at the end of the day’s meetings and had clearly softened his hard-line stance of the previous months. He’s flush with excitement over the future.

He made that abundantly clear without any of the fiery rhetoric that riled up Sooners fans and many in the league who feel expansion is the only solution to saving the league and propping it up against the bigger banks that are the SEC and the Big Ten.

“I think our conference is extremely strong. I want to underline that,” said Boren, the chairman of the Big 12 board of directors. “We’ve been through some choppy periods in the past, but I don’t think our conference has ever been stronger. Our relationships are strong. There never has been a stronger commitment.

“We’re going to have to sort through all possible strategies. Everything will be considered. I’d rather be right than hasty.”

Because Boren seemed to see the Big 12 in a different light than when he labeled his league “psychologically disadvantaged” in February, his change of heart or softening — coupled with Texas’ clear stance — could put the Big 12 in yet another holding pattern.

Texas President Gregory L. Fenves echoed athletic director Mike Perrin’s strong anti-expansion, anti-Big 12 Network sentiments. He told the American-Statesman on Thursday that he continues to view the league as a strong conference and one that wouldn’t necessarily be enhanced by growing to 12 members.

Perrin mentioned on Wednesday that he thought Boren was softening his stance.

“I think he’s backed off of that, even in recent weeks,” he said.

There was zero sense of urgency and little appetite for expansion, at least in Fenves’ and Boren’s Thursday comments.

Of course, Boren was in a much better frame of mind, at least partly because he learned Sooners quarterback Baker Mayfield was awarded another year of eligibility, giving him this year and the 2017 season to play for OU.

Thanks to a wisely reconsidered re-vote on the controversial walk-on transfer rule, the league approved the ability of those athletes to change schools within the conference without forfeiture of a year of eligibility if they didn’t have an offer of financial aid “in written form” from its previous school.

This was clearly a kinder, gentler David Boren.

He also backed off his much-circulated quote about the Big 12 being “psychologically disadvantaged” and said it wasn’t imperative that every league have the exact same financial situations “penny for penny.”

And he hinted that the Big 12 financial intake, which will be revealed Friday when the meetings conclude, will be much rosier than some have suggested.

“We should not be at a strong disadvantage,” Boren said. “We don’t have to have exactly the same income as every other conference. But we’re not as disadvantaged as some might think. If we’re in the same neighborhood, we’ll be extremely competitive.”

As for expansion, he essentially pushed aside any direct talk about candidates and said one of his primary interests would be in vetting potential schools with the idea that “none would be diluting the conference.”

He also coyly addressed a question about whether the Big 12 might be able to pry a couple of members out of other Power 5 conferences.

“I’d have to leave that to lawyers and other people,” Boren said. “We have stability. Other conferences have stability. Some strong (Group of Five conferences’ ) people do want to join this conference. Now, I haven’t gotten any mink coats in the mail. But we have to be realistic about the pool (of teams) that is available.”

The clear sense was the league is united in taking a slow, deliberative stance in dealing with critical issues like expanding, adding a football championship game and considering a Big 12 Network.

Boren tossed no hand grenades into these Big 12 meeting rooms. Instead, he emerged as very much the pacifist and embracer of the present.

The wildly fluctuating marketplace and the tremendous technological change, even in the last 12 months with the way college sports fans view the games, have led Boren to slow down the pace. As well as the rhetoric.

“We’re going to be very careful,” he said. “It’s an obligation a conference has and, as an individual president, we have to see where does the data take us. We’re not in a weak position. We’re in a strong position. I’m trying to take an open mind.”

It may be open, but it’s looking more and more like the Big 12 may be closed for expansion. That could change if more of the data shown the league presidents on Friday and further discussions back on their campuses convince them otherwise.

Boren and Fenves certainly want to convey publicly that they’re firmly on the same page and totally in support of strengthening the conference together.

“This conference should look at all the options,” Boren said. “I would not want this group to be reporting four to five months down the road that these decisions were made very casually. We are in a position of strength. We’re not in any kind of crisis where we have to decide something very, very quickly.”

Bohls: What did Friday tell us? That the Big 12 is alive, well and well off