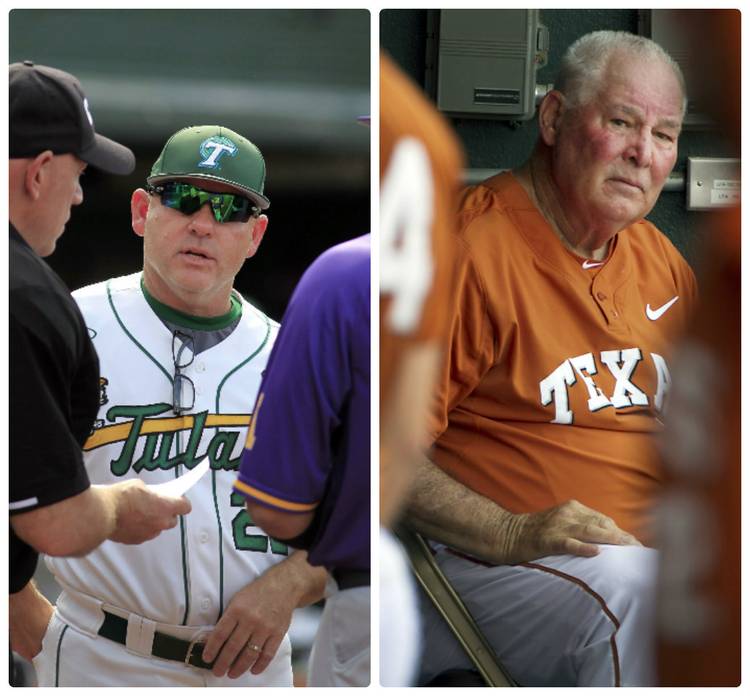 Former Tulane coach David Pierce (left) and former Texas coach Augie Garrido (right) are contrasts in coaching styles and personalities. But both have shown they can be successful in terms of on-field results and remaking a college baseball program.

And that’s just judging from the book cover. First impressions are critical, and the Longhorns’ new baseball coach made a good one Thursday.

When he was introduced, completing an exhaustive, coast-to-coast coaching search, there were many positives to glean.

But more than not, Pierce is the anti-Augie.

And we’re not just talking about the fact that Pierce, as a head coach for five seasons, has 1,753 fewer wins and five fewer national championships than Augie Garrido.

When Garrido arrived before the 1997 season, he was already a finished product. We assume Pierce is just getting started since he’s never taken a team to a super regional and Garrido used to practically get his mail in Omaha. “I think that works for him,” Garrido said Thursday. “He has lots to prove. His ambition’s going to be there.”

Plus, Pierce is a Texan through and through; Augie is more Californian than the Golden Gate Bridge.

Nor did Pierce mention bunting a single time. We assume he’s not opposed to a sacrifice bunt here and there. Garrido, as we know, lovingly said he’d bunt Babe Ruth. Pierce is no rookie at 53, but is four years younger than Garrido was when he left Cal State Fullerton and brought his wit and wisdom — and wins — to Disch-Falk Field.

Unlike Augie, Pierce may be his own pitching coach here. He was at Tulane. Garrido always gave total autonomy to his pitching coaches.

Pierce is also known as a grinder, both on the road as a relentless recruiter and in the field. He loves the process. Augie’s idea of recruiting was researching Italian restaurants.

“I don’t say I coach baseball. I coach people,” Pierce said. “We have a saying that we’ll give you all the information, prepare you the best we can and then give the game back to you.”

In other words, let the players play. It’s a cool style of coaching, pretty much the antithesis of college basketball coaches who have to control everything from the in-bounds plays to the water breaks.

As he put it himself, he’s “a slow-talking Texan.” Nothing wrong with that. In fact, it makes it much easier for old geezers with notepads to keep up with his quotes.

He’s very organized and prepared. He thanked everybody from Gus to Augie to, I think, the bat boy for the last 20 Texas teams. He’s appreciative.

He likes his momma. And he recognized her at the press conference. I’m not saying he’s a momma’s boy because he sure seems like he’s his own man, pretty intense and nobody’s fool. Linda Pierce said her son has always been very studious about the game. “I remember when he was little, he’d be sitting there, just lost in his thoughts before the game,” she said. “He’s always loved baseball.”

He and Garrido unquestionably share that quality and others. “I like him because he’s been successful wherever he’s been,” Garrido said. “That shows he can really communicate with his players and that they buy in. He sees himself as a schoolteacher, which is a good thing.”

Like Augie, Pierce has a self-deprecating sense of humor. When asked about wearing uniform No. 22 at Tulane, Pierce said he wore No. 28 as hitting coach for Rice when the Owls won the national championship.

“So I’m not very smart because I changed it,” he said, laughing. “Twenty-two is an interesting number for me. My dad, who passed away when I was very young, was born on the 22nd, my wife (Susan) and I got married on the 22nd and my son (Shea) was born on the 22nd. So I figured I’d just wear No. 22.”

I didn’t have the heart to tell him he was the 22nd choice of Texas. Now that’s a huge exaggeration — he was one of maybe 11 who were seriously considered and/or offered the job — but athletic director Mike Perrin predictably said he offered the Texas job only to Pierce and no other.

Pierce is a good guy and a good coach who talks slow. Let’s hope he wins fast.

Golden: For now, tortured hiring of David Pierce will be Mike Perrin’s legacy