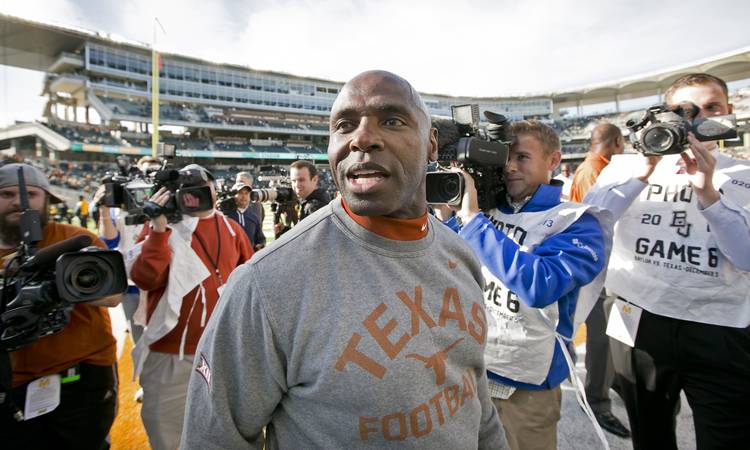 DALLAS — Movie night it wasn’t at the Longhorns’ workout facility these past few months.

Something was showing, but it wasn’t an audience-grabber like a “Fast and Furious” flick.

Charlie Strong had other ideas. Per his orders, the flat screens at Moncrief-Neuhaus played a continual loop of 2015 Texas football games.

One day, they showed the victory over Oklahoma, easily the biggest of the Strong era. I’m guessing that drew a nice little crowd.

There also was the season-ender at Baylor that saw Texas end a two-game losing skid against the Bears. You know a few players stuck around for a quarter or two.

To his credit, though, Strong included the soul-taking 38-3 season-opening loss at Notre Dame and the 24-0 shellacking at Iowa State in the rotation, too. Man, talk about some rotten tomatoes in high def.

It might not shock you to hear that a pair of replays — lowlighted by a combined three points, 447 yards of offense and a whopping four third-down conversions out of 27 attempts — was met with a large amount of displeasure in the locker room, so much to the point that several players asked that those 2015 butt-kickings be replaced with something a bit more positive.

“Do not touch that TV,” Strong responded. “Do not turn it off.”

Strong wants the losing to hurt much more than the joy that winning brings because he just can’t afford any more head-scratchers — not this fall, during his make or break season. He understands there will be no mulligans in 2016. Texas is 11-14 in Strong’s first two years, and fans need not be reminded we’re coming up on seven years since the Longhorns last played for a national championship.

So call this fall Charlie’s biggest test. He was all smiles Tuesday, cracking jokes and holding court at a time of the summer when hope springs eternal for all 10 coaches in a conference that may soon expand. After all, it’s July and everyone is 0-0 and displaying the enthusiasm of a five-year old opening presents on Christmas morning. That includes Strong, whose last post-game news conference came last December in Waco.

On that day, I asked him how he would have felt at the beginning of the season if I’d told him he would beat Oklahoma and Baylor in the same year.

“I wouldn’t be sitting here with five wins,” he answered.

He had just emerged from a locker room that should have been giddy about knocking off the 12th-ranked team in the country. Instead, the mood was Dewey-decimal silent, almost as if the Horns had just lost.

In a way, they had. Not the game, but the chance to play in a bowl game. When the holidays rolled around, Strong texted some of his players to see how they were feeling. To his quiet delight, they were still in the doldrums after missing out on a chance to play another game and — more importantly — take advantage of those pre-bowl practices that have helped many a young player turn a corner two months before the start of spring football.

“It was a hard pill to swallow,” senior tight end Caleb Bluiett said. “We all wanted to play that extra game. We clicked on something good and wanted to keep it rolling. We took that feeling and brought it into spring ball. Hopefully it will continue into the fall.”

It must. No coach in Texas’ history has suffered through three consecutive losing seasons. That’s an unbelievable feat since they’ve been playing tackle football at UT every year since 1893.

Strong wants no part of that history book.

He has to win now or someone else will be settling on the viewing choices at Moncrief-Neuhaus next summer.

Editor’s note: The original version of this story has been updated to reflect that no coach in school history has had three consecutive losing seasons.

Bohls: Big 12 sanctions are possible for Baylor, but will we ever get answers?

Bohls: In search of a deal, UT leaps to become a Houston booster