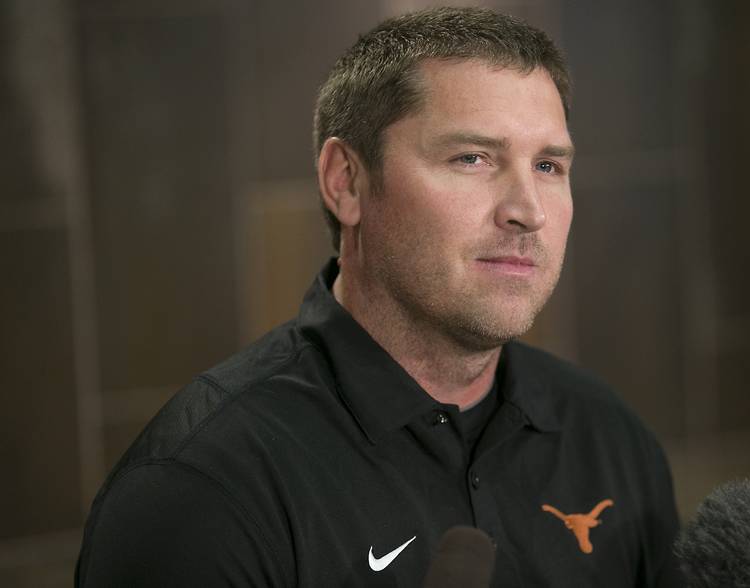 Sterlin Gilbert cleared up everything on Friday.

As the Longhorns’ new offensive coordinator, he’ll call plays from the sidelines — not the press box — so he can look his players “in the eye and there will be no missed communication. They’ll be getting it from the horse’s mouth.”

Despite some reports to the contrary, Gilbert said he did, in fact, call the plays at Bowling Green and Eastern Illinois. He also said emphatically that he was “heavy involved” in the game-planning at Tulsa, where head coach Philip Montgomery was in charge of the process.

And, no, Gilbert still hasn’t watched a single game tape from the 2015 Longhorns football season because he wants “no pre-conceived notions. Like they say, labeling is disabling, and I want a clear picture for myself.” That might seem a little odd, but he said, “Nothing from last year will help us.”

Not when the Texas offense ranked 92nd nationally.

OK, so Gilbert didn’t clear up everything. For instance, he didn’t name a starting quarterback.

That announcement will come in the next couple of weeks if Charlie Strong and Gilbert stick to their plans and pick Shane Buechele, Jerrod Heard or Tyrone Swoopes early in preseason camp. No one expected a decision Friday, when Strong and his staff visited with the media on the eve of August workouts.

There is no ‘g’ in Sterlin, but there’s plenty of confidence within him.

What appears to be clear is that Texas has a very self-assured offensive coordinator who’s going to do things his way and who has Strong’s full blessing to do so.

“I have all the trust he’ll improve the offense,” Strong said. “He has enough weapons. We just have to put ‘em in the right place and be successful.”

Gilbert may not be the next Art Briles, at least on the football field, but then again, maybe he will be. He may not start out as an offensive savant similar to Briles, the former Baylor head coach, but he may have to be an offensive savior if Strong is to be a survivor.

Gilbert’s not approaching this do-or-die season with any timidity, and that’s a good thing. He will need a strong backbone to combat the naysayers and thrive in the wild, wild Big 12, where four teams averaged more than 40 points a game last season and Oklahoma State was just a hair under that figure.

The notion that Gilbert didn’t call plays at two of his past three stops clearly rankles him, and he set the record straight Friday. The buck will stop with this pure Texan, who turns 38 next week and is just five years removed from a job at Temple. That’s Temple High School, not the Temple that finished 10-4 last season and lost to Houston in the American Athletic Conference title game.

There’s nothing wrong with that shallow of a résumé so long as the Longhorns produce first downs and touchdowns. It’s a gamble for Strong to pluck Gilbert as his second choice after TCU’s Sonny Cumbie, but Cumbie would have been under the same scrutiny.

Gilbert has no playbook he hands out, but knows how he wants to play. “We want to do it fast, do it in a hurry and do it at the highest level,” he said.

Under Gilbert’s direction, the UT offense hopes to snap the ball 80 to 85 times a game, put the football consistently in the hands of the playmakers and showcase the kind of balance that Briles’ teams displayed in Waco. Gilbert bristles a little, though, when it’s described as the Baylor offense, one combining power running with a downfield passing attack.

“It’s our offense,” he said. “We’ve got a twist here and there. We’ve got some wrinkles we do differently.”

While it’s obvious that Gilbert plans to feature running backs D’Onta Foreman and Chris Warren III equally, he knows his unit will rise and fall on the shoulders of Buechele … uh, his starting quarterback. Gilbert called the competition “close” on Friday, but he didn’t sound worried.

“It’s going to work itself out,” he said. “If we make a decision sooner than later, that’d be big. But we’ve got to make the right decision.”

And Longhorn Nation hopes hiring Gilbert was the right decision.

Golden: Accountability is Priority 1 for Texas this season