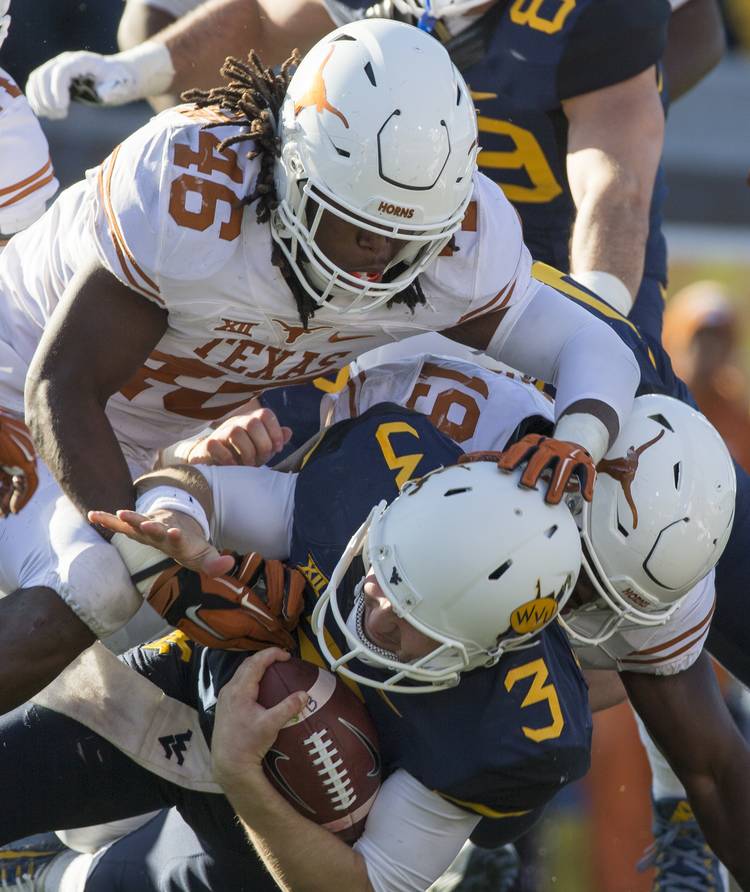 Texas Longhorns(46) Malik Jefferson and (19) Peter Jinkens sack West Virginia (3) Skyler Howard in the second half of the game on Saturday, Nov. 14, 2015 (RICARDO B. BRAZZIELL / AMERICAN-STATESMAN)

The most important sentence out of Friday’s interviews came from the lips of one Vance Bedford, whose defense had its share of struggles in 2015.

“We were terrible,” Bedford said.

No sugar-coating. Just the unvarnished truth from a veteran of football falls who understands the stakes in 2016. True words from a man who knows his charges must do a better job of stopping people if the Texas Longhorns are to take a positive move under Charlie Strong in his third season.

I’ve always been told that the most important thing in finding a cure for what ails oneself is to first admit that there is a problem. Bedford’s words were a move in the right direction. Fixing it is another issue altogether, but Vance had the look of someone who happens to be all in when it comes to problem solving in this, the most important season of Strong’s tenure.

After losing six players to the NFL in his first season as defensive coordinator, Bedford piloted the worst statistical defense in school history in 2015. Credit to him for not running from that fact and owning his unit’s deficiencies.

That bodes well for the entire team; last season’s 5-7 group gave up 30-plus points in half of its games, played below average on offense and even worse at times on special teams, with late-game gaffes in consecutive weeks that cost the team a chance to win home games against Cal and Oklahoma State. And let’s not forget the mystery of that lost weekend in Ames that has yet to be fully explained.

Here’s the good news: The Horns aren’t running away from who they were. They just don’t want to be that group anymore.

Some of you know already that I’m leaning toward toward picking the Horns to spring an upset over Notre Dame in the season opener despite question marks at quarterback. Nothing that I heard Friday steered me away from that possible plan.

Accountability can lead to correction, which can lead to improvement, which could ultimately lead to bowl trips in fancy hotels with steak dinners and post-Christmas swag.

I’m not alone is saying that it’s well past time for a new narrative at Texas. One that involves winning.

Bohls: In search of a deal, UT leaps to become a Houston booster

Bohls: Can Sterlin Gilbert be an offensive savior for Longhorns?