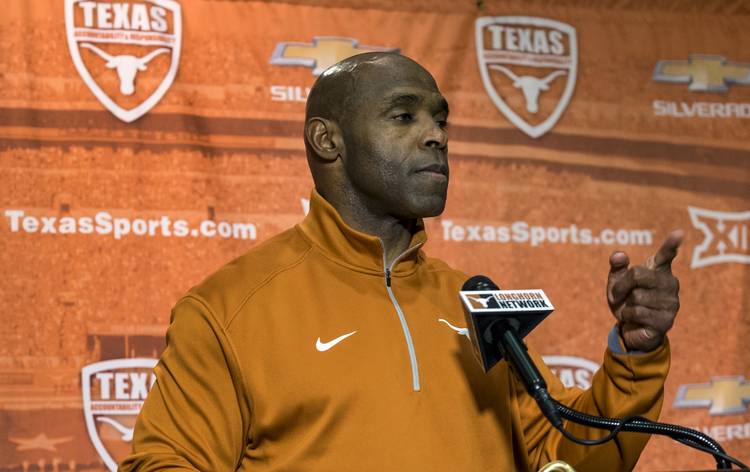 Texas coach Charlie Strong and his assistant coaches will meet with the media at 11 a.m. Friday, Aug. 5, 2016.

Your Texas Longhorns have enough talent to be competitive in every single game this fall and that’s a far cry from what we witnessed in 2015.

Here are five reasons why:

1. The Brahma bulls will impose their gore values on defenses

With all the talk of the Horns playing at a higher tempo under a new offensive coordinator, you need only look to two men that carry around a combined weight of 501 pounds to know where the life-force of this offense begins and ends. D’Onta Foreman and Chris Warren are the two most important people on this offense because they have the potential to keep the starting quarterback awash in third-and-short situations. That’s music to the ears of any head coach.

I told running backs coach Anthony Johnson that he needs to put in a special request for 40-plus carries for those big backs.

“I’ll be yelling at (Gilbert) to let’s run that rock,” he said with giggle. With five talented backs at his disposal, Johnson has to feel like a chef at a five-star restaurant who has a cooler filled with lobster, cracked crab and the finest meats. With those two big’uns leading the way, Johnson isn’t exactly flipping burgers.

2. The big uglies will be better.

Strong talked about the last couple of seasons where he he literally held his breath hoping none of his offensive linemen got hurt. The offensive line might actually be a strength of this club with Kent Perkins, Connor Williams, and Patrick Vahe anchoring a group that should dot the all-conference team by season’s end.

Back in Texas’ golden era of winning, Mack Brown and longtime line coach Mac McWhorter had freakish depth up front, which allowed them to substitute an entire second team at times to keep the front line talent fresh throughout a season. The current crew isn’t there quite yet but the improved depth is obvious.

The new offense will be living on Tulsa time this fall and hopefully that’s a good thing. Gilbert professes to have never seen one clip of previous film on any of his new players which is an unorthodox approach to say the least. But it if works, then he will be a genius in these parts. He has the buy-in of his fellow coaches, including tight ends coach Jeff Traylor who says he likes the outside-the-box aspect of this high-tempo attack.

There’s good talent at receiver to allow success to happen. John Burt is a star in the making and Collin Johnson is a big-time prospect.

Gilbert worked as a grad assistant under Art Briles at Houston and that played a large in him developing a philosophy of how to put points on the board. Expect some good carryover at Texas.

4. Talent in the secondary

It doesn’t take long to figure out that cornerback is where Texas’ biggest defensive playmakers not named Malik Jefferson reside. Holton Hill, Kris Boyd, and Davante Davis will all play the majority of the snaps, especially in conference play where teams like Baylor, TCU, and Texas Tech run mostly multiple-receiver formations. I love the ballhawk nature of these youngsters and don’t forget grizzled old veteran Sheroid Evans who is finally healthy after spending most of his college career on the shelf due to numerous injuries.

Defensive coordinator Vance Bedford has some spots he must address but the talent is there to make good things happen on that side of the ball.

5. The old law of averages

You didn’t expect the Longhorns to be bad every year, now did you? This whole struggle thing is cyclical in nature and it’s well past time for the Horns to make more noise in the win column. Strong has so much talent on this roster that the time for excuses has passed him by.

It’s time to produce. Sure there are some legitimate concerns at defensive tackle and linebacker but Chuck has himself some weapons. Like he said to the media on Saturday, “We have to coach’em up.”

So there you have it. I’m not ready to predict Texas’ regular season record just yet but the fan base should prepare itself for a holiday season of football. The Horns will make some real noise in the Big 12 and go bowling this winter.

Bohls: What to do with Jerrod Heard, what to do …