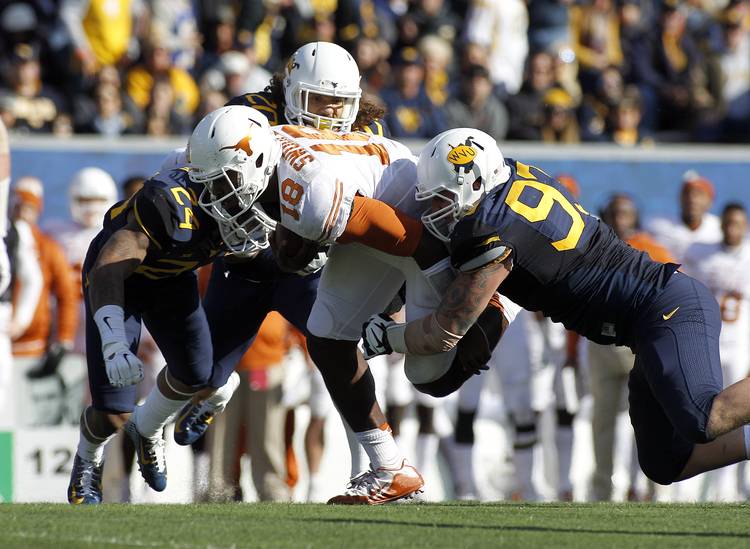 MORGANTOWN, WV - NOVEMBER 14: Noble Nwachukwu #97 and Jeremy Tyler #24 of the West Virginia Mountaineers tackle Tyrone Swoopes #18 of the Texas Longhorns in the first half during the game on November 14, 2015 at Mountaineer Field in Morgantown, West Virginia. (Photo by Justin K. Aller/Getty Images)

Texas has become Last Chance U for this senior class.

As in its last chance to make a huge stamp on an upward arc that has to start now.

To avenge last year’s loss to Notre Dame and get 2016 off to a great start, the Horns not only have to depend on their younger, upside-laden talent core but also receive large contributions from the most battle-weary group on the roster — the 12 scholarship seniors.

This represents one last swing for the fences, a final chance to finish with a winning record. Shoot, how about one more opportunity to recapture that feeling of just winning a bowl game? That was three years ago, in case you’re wondering.

Charlie Strong and his coaching staff are important, but the real growth of young talent has to be cultivated from the mentorship of veterans who have been through something already.

By now you’re seen the near bottomless coverage of freshman Shane Buechele and his quest to win the starting quarterback job. That’s been the leading story more times than not. At times, you’ve read about the talent bounty at cornerback where fearless youngsters Holton Hill, Davante Davis and Kris Boyd are ready for whatever.

And let’s not forget that backfield which features five real talents with the potential to do great things this year and next.

Meanwhile, the old heads have quietly gone about their business of preparing for the final frontier.

It’s hasn’t been good barbecue and homemade ice cream for the oldest class that’s been part of teams that have gone 19-19 over the last three years. But their final offseason has brought with it a renewal of hope. Real progress has to happen in 2016, but won’t if we get a season-long rollercoaster.

“I look at it like so much has been said about the youth of our team,” Strong said, “but you still have to look at what the older guys are doing and you have to keep pressing, because the leadership has to come from the older guys.”

In his first two seasons, Strong has vacillated between sweet praise and sour onions when it’s come to his senior classes. One minute he’s espousing on how great they are in the leadership department, only to reverse course after a brutal loss and call them out publicly for not doing enough in that same department.

While he is demanding more leadership from his oldest players, Strong’s staff has to be on point when it comes mental preparation. A win over Oklahoma should never be followed by a shutout loss at Iowa State two weeks later. That’s on the coaches, especially the guy in the big office.

Of the seniors, Perkins, tight end Caleb Bluiett, safety Dylan Haines and defensive tackle Paul BoyetteJr. — aka PB&J — have garnered the most career reps, so one would hope their leadership will filter down to their fellow starters.

Others like Kevin Vaccaro, Sheroid Evans and Tim Cole are smartly taking on mentoring roles, even if none have started a game at Texas. If you’re looking for an inspirational leader, look no further than Evans, a sixth-year senior who has more lives than Jason Vorhees. Dude is so old, he wouldn’t even tell us his age this week. Call him the senior citizen of the senior class.

So while we’ve spent most of the spring and summer talking about Texas’ talented underclassmen, there is enough talent in these senior ranks to give those young bucks that extra boost they’ll surely need to finish the season with a bowl game.

“For me, as a senior like Dylan and Sheroid, we’ve been leading them pretty good and showing them the ropes,” Vaccaro said. “Because it’s hard coming out as a freshman, because you don’t know anything and you need someone to help you, and we’ve been doing that. I think they’re comfortable and they’re getting used to the way we practice. It’s coming along good.”

Looking ahead, Strong has enough on this roster, and with more talent coming in, to get real wins for the next several years. But there has to be a starting point.

How about right now?

“I believe we’re headed in the right direction,” Bluiett said. “We’re trying to get the young guys to buy in because it’s our last ride.”

A look at these 11 seniors’ Texas careers — so far:

Bohls: At least Texas and Texas A&M are talking to each other about playing again