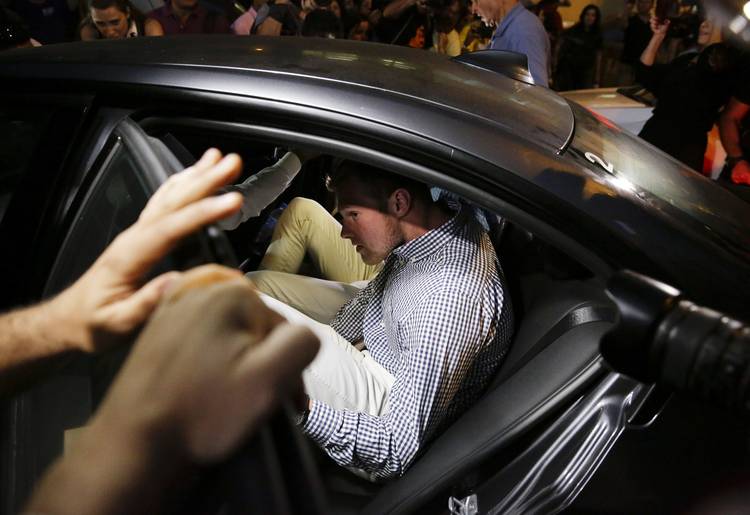 American Olympic swimmer Jack Conger gets into a car as he and fellow swimmer Gunnar Bentz leave a police station in the Leblon neighborhood of Rio de Janeiro, Brazil, Thursday, Aug. 18, 2016. The two were taken off their flight from Brazil to the U.S. on Wednesday by local authorities amid an investigation into a reported robbery targeting swimmer Ryan Lochte and his teammates. A Brazilian police officer told The Associated Press that Lochte fabricated a story about being robbed at gunpoint in Rio de Janeiro. (AP Photo/Leo Correa)

Brazil can thank Ryan Lochte and his Whiz Kids for knocking the Zika virus and contaminated water from the headlines.

Sadly, the focus of the Summer Olympics has shifted from the athletic dominance of a global super power to the juvenile actions of vandals who reportedly acted with no real regard for authority or private property.

That’s the one thing about the Olympics. The world shrinks to its tiniest size because everyone’s watching their kids compete. Add the monster that is social media and the potential for international embarrassment increases exponentially.

Lochte did issue what will have to pass for an apology on Instagram, saying he should have been more “careful and candid” in describing what happened the night he and his teammates reportedly vandalized a Rio gas station while leaving their scent on the premises. It came across as half-hearted; Lochte still seems to be playing the victim, at one point writing that a stranger pointed a gun at him and demanded money before he and his friends were allowed to leave.

The stranger was in fact a policeman who was responding to a call of vandalism. The demand for money was reportedly payment for damage inflicted upon private property.

As it turns out, Lochte, Gunnar Bentz, Texas ex Jimmy Feigen and current Longhorn Jack Conger helped paint us as ugly Americans. Fair or unfair, but the sins of a few can affect the whole bunch.

Up until now, the 2016 Games have been a smashing success, both on the medals stand and in the area of national pride.

The legendary Michael Phelps and the women’s gymnastics team led by legend-to-be Simone Biles are feel-good stories that have warmed our hearts. Beyond our country, we’ve enjoyed the brilliance of sprinter Usain Bolt, the classy opening ceremonies that honored the refugee team, and Brazil’s overall ability to throw one great party.

Before the robbery/non-robbery took over the headlines, the only controversy coming from our side of the fence was the unfair vilification of 20-year-old gymnast Gabby Douglas for not placing her hand over her heart during the national anthem, as if standing at attention was not a long accepted practice in our country. Some of those same people who came after Douglas are quick to dismiss the Lochte crew’s vandalism as the actions of kids getting a little rowdy after a night of harmless fun.

Well, don’t let the college hair-dye job fool you, but Lochte is far from a rookie. He’s a 32-year-old millionaire and a veteran of four Olympics. Instead of making up stories of being robbed at gunpoint by fake cops — a story that had more holes than Mrs. Johnson’s on a Saturday night — he should have been the one cautioning his younger teammates against doing dumb stuff at the most major of international competitions.

What Lochte and Co. did that night is much larger than watering the dirt with a toilet nowhere in sight. It is about their blatant disrespect toward another country. They not only broke the law in embarrassing fashion outside of our borders, but encouraged the belief that we are a nation of entitled, arrogant bullies.

Unlike his three cohorts, Lochte luckily made it out of the country before the Brazilian posse could detain him. The others returned home, but not before reportedly telling investigators Lochte concocted the whole story.

Let’s hope future athletes will follow the example of current Olympians like Biles, Ryan Crouser and Michelle Carter, who have conducted themselves with nothing but class and treated their hosts with respect.

The last thing we need is to give the world another reason to hate us.

Golden: How Charlie Strong must handle the big QB mystery