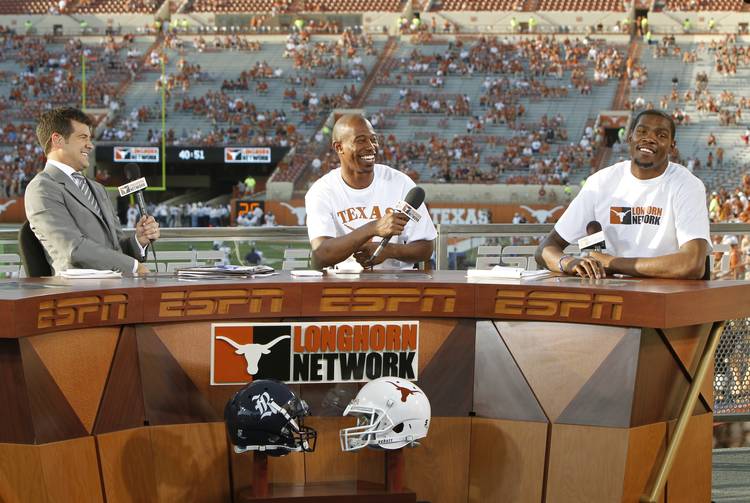 It’s been five years since Matthew McConaughey appeared on TV cooing about “a new place to watch, to cheer, to look for one school, one star, one state.

One incredible success? One spectacular failure? When it comes to judging LHN — which on Friday will mark five years to the day that it launched on Aug. 26, 2011 — beauty is in the eye of the beholder, it seems. And let’s be honest. Just about  everyone has expressed some kind of opinion about the UT-centric network, which started with 20,000 subscribers in Texas five years ago but now boasts 20 million coast to coast.

As for the all the negativity, Stephanie Druley said she “stopped reading that a long time ago.” Over the last five years, the UT graduate launched the channel in 2011 and has seen her career rocket into the stratosphere at ESPN. Now a senior vice president, Druley is responsible for everything viewers see on all ESPN networks involving college sports, the NFL and Major League Baseball.

But LHN will always remain on her radar.

In an interview with the American-Statesman, Druley said ESPN remains “fully committed” to the Longhorn Network. That echoes comments made by UT President Gregory L. Fenves in June. The school will even light the UT Tower on Friday in burnt orange with the number 5 in white office lights as a de facto birthday candle.

“It’s a great place for fans to experience Texas sports,” Druley said. “I sit in my home in North Carolina and can watch softball and baseball as much as I want. I could never do that six years ago. You don’t have to be in Austin to be reinvigorated by the athletics programs at Texas, or the university for that matter.”

Druley said ESPN was charged with creating a platform for all UT sports that is, as stated in the contract, “first class in all respects.” To that end, ESPN has delivered the goods.

The network has won 12 College Sports Media awards for game presentation and various athlete profiles. LHN’s All-Access shows are far and away some of the best programming on any sports network available.

Thus, Druley says she has no intention of turning LHN into some kind of Big 12-centric network, as if that’s a cure-all in the current expansion hubbub.

So, about those Longhorns. They’re the ones who haven’t held up their end of the bargain, really. The football team has never won more than nine games in the last five years. In fact, all four major coaches have turned over since the channel was turned on.

That’s a huge reason why UT administrators won’t quit LHN. They believe the tide will turn, and then having a UT-themed channel will be a Godsend. Of course, while they wait, Texas officials will gladly cash ESPN’s $15 million check that comes annually.

There’s plenty of time for the Longhorns to get it turned around. ESPN’s contract runs through June 2031.

“For me, it was about leading a group of people who are producing excellent content,” Druley said. “What other people said and thought did not matter to me. I know what we’re doing. I know better than anybody what we’re doing. And I know how fortunate that, if the fans take advantage of the network and what the network has to offer, how fortunate they are to have it.”

Oh, there’s been plenty of folks knocking LHN down. One of the most damaging shots from a public perception standpoint was a San Antonio Express-News report last December stating that LHN had lost $48 million, according to SNL Kagan, a media research firm.

“We don’t comment on our finances,” Druley said. “Nothing that was written there was anything that anybody has said was accurate.”

LHN’s financial wherewithal — or, at least the perception of financial trouble — was back in the spotlight earlier this summer. The Statesman reported the network was cancelling Longhorn Extra, the nightly UT-themed SportsCenter, if you will.

LHN is not a Nielson-rated station; ESPN tracks internal viewing metrics, though. Essentially, Druley said its ESPN’s job to take resources from failing programs and shift them toward what is working. And what works for LHN is live events. Lots of them.

One of the most critically acclaimed events in LHN’s five-year history didn’t have anything to do with football. The network anchored itself inside the LBJ Library and aired three days of coverage from the Civil Rights Summit in 2014.

“I know fans like to say, ‘Why the hell is there a fashion show on Longhorn Network?’ Well, you know what? It’s because we think it’s cool and there are some talented students there,” Druley said. “It’s a different thing and we get to tell their stories and why they’re inspired by that medium. There’s a lot of hidden gems on the Longhorn Network, if you spend time with it. It’s not just the 2006 Rose Bowl — although, you see that a lot.”

Speaking of that, how many times can one network air one football game, anyway?

Asked if there was a limit on how many times Texas can beat USC, Druley said, “No. Why? I want to relive that as much as possible. It was one of the greatest events of my life. I’ll watch it as much as you want, and I’ll watch it framed as many ways as you can. That’s why we did the Longhorn living room with Mack (Brown) and his players.

“I can watch that as much as you want me to watch that. There’s gonna be a room in heaven where we get to go in there and watch it, I think.”

Bohls: Texas’ Malik Jefferson is coming on strong, but don’t rush him