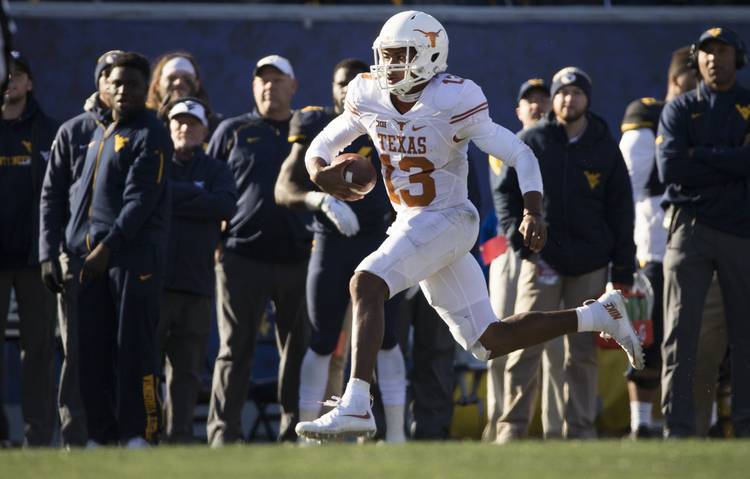 Once upon a time, Jerrod Heard gave Longhorn Nation hope.

On the night of Sept. 19, 2015, he personally took the roof off Royal-Memorial Stadium with an epic performance. That record of 527 yards of total offense in the 45-44 loss to Cal was reminiscent of what he used to do at Denton Guyer HS on the regular.

It was also the unofficial announcement of Heard’s arrival as the next great quarterback at the University of Texas, following Vince Young and Colt McCoy.

Or so we thought.

Heard 4-6 in his 10 starts, threw for 1,214 yards with five touchdowns and five interceptions, and added 556 rushing yards and another three scores but wasn’t able to consistently produce the highlight-reel plays we witnessed that night against the Bears.

Now here we are, less than a year later and Heard has gone from the program’s symbol of hope to a guy trying to break into the regular receiving rotation. Head coach Charlie Strong said Heard approached him and asked to switch positions after it became obvious that he was running third behind senior Tyrone Swoopes and freshman Shane Buechele in the starting quarterback battle.

“I didn’t fight against it,” he said. “I was ready for the transition myself, so I felt like it would be a positive thing for me and for my future. So I was all for it and ready to go.”

So what went wrong?

Call it a combination of factors. First, he missed spring football with a shoulder injury. Second, Buechele quickly established himself as a player when he threw for 299 yards in the Orange-White game in the spring. Third, if he has any dream of playing in the NFL, it probably won’t be as a quarterback so now was the time to make a move.

The player teammates call “Juice” isn’t the leader of this offense anymore but can still get loose on catches, jet sweeps, maybe even as the QB in the Wildcat formation. Simply put, this Texas offense isn’t good enough to have this level of athlete over on the sideline staring blankly at a clipboard while wearing a visor instead of a helmet.

Heard is already turning heads at his new position. A video clip circulated on texassports.com showed him displaying soft hands on a catch and spinning past freshman safety Brandon Jones to get down the sideline. Another showed him making a diving catch in the end zone. Quick study? Appears so.

“Obviously he’s a work in progress because it’s something that’s new for him,” receivers coach Charlie Williams told me Thursday. “He has the speed and quickness necessary to get out of his breaks and you have to have that at the position.”

When we spoke to Heard the past week, I asked him about other quarterbacks who had successfully made the switch from college quarterback to receiver and enjoyed success on the next level. Long before he caught 1,000 passes and won two Super Bowls with the Pittsburgh Steelers, Hines Ward threw for a bowl record 413 yards in Georgia’s 1995 Peach Bowl loss to Virginia his sophomore year. He went on to catch a TD pass in Super Bowl XL from fellow wideout Antwaan Randle El, a converted quarterback from Indiana.

When the coaches took away the protective cloak that is the black practice jersey, Heard said some defensive teammates like Malik Jefferson, Kris Boyd, and Kevin Vaccaro were excited for a chance to blast him in contact drills. When asked last week if he had gotten to take his shot yet, Vaccaro said “Not yet but it’s coming.”

“I was kind of scared because the DBs, they loved it,” Heard said. ” And the linebackers loved it. That day, it was pretty intense. I got hit a few times and I got to lay some hits on them. It was real fun though.”

Heard can help this offense if offensive coordinator Sterlin Gilbert can figure out a way to get his hands on the ball five to 10 times a game. Williams loves his upside and fans should be excited that Heard will get a chance to try and rediscover that game-breaking ability we saw early last season. And there’s still the possibility of him returning to the position if things go south for Swoopes and Buechele.

“I feel like I’m really coming into my game and the style of receiver that I wanted to be,” he said. “I just want to be that reliable receiver for those quarterbacks to throw to.”

Bohls: What can go wrong (and right) with Texas’ starting quarterback decision