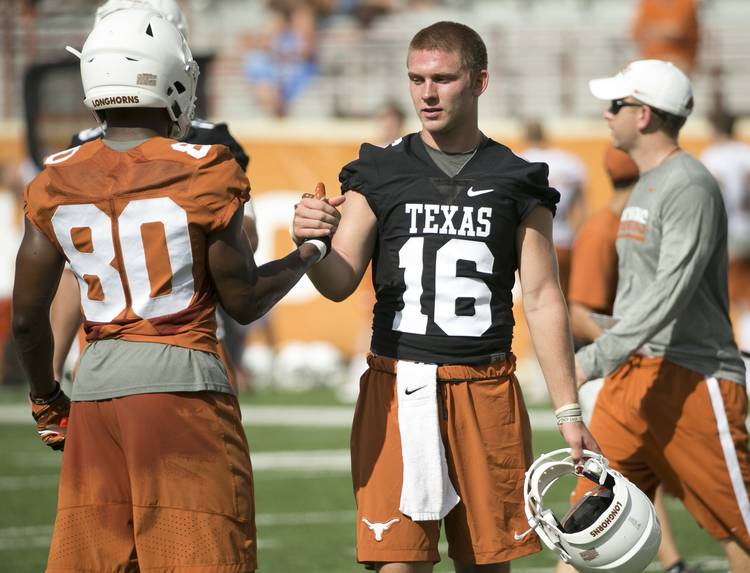 Please pardon Sterlin Gilbert if he’s a little unsure about which Texas freshman will have a big impact this season.

Last season, the Longhorns started a school-record 10 freshmen at various points throughout the year and played 17 overall. Those benchmarks won’t collect much dust.

Texas could start three freshmen on Sunday against 10th-ranked Notre Dame — receivers Collin Johnson and Devin Duvernay and center Zach Shackelford. Shane Buechele would be No. 4, if coach Charlie Strong gives him the starting nod over senior Tyrone Swoopes.

Receiver Lil’Jordan Humphrey likely will get some snaps, as will running back Kyle Porter, Strong said. Multiple freshmen are in the defensive line rotation, and safety Brandon Jones could see action as well.

When Strong went on the recruiting trail last year and offered immediate playing time, he darn sure meant it.

Maybe that’s how the Horns ended up with the nation’s No. 7-ranked recruiting class, according to 247Sports’ composite poll. Texas has only 17 seniors on the entire roster.

Just in case anyone’s wondering, Notre Dame’s starting 22 doesn’t feature a single freshman. Oh, the Irish have freshmen on the two-deep roster. But as for starters, not a single one.

“We were out there in the stadium practicing, and I had all the freshmen standing there,” Strong said. “And I said, ‘Now, what are you guys going to do come game day when we’re sitting here and this place is going to be crowded?’ They said, ‘Oh, we’ll be fine.’

Sunday’s game is more than just your typical season opener. It’s projected to be the first time more than 100,000 fans pack Royal-Memorial Stadium since Strong arrived in 2014. That’s a huge reason why he joked about the freshmen and said, “They have no idea yet what they’re getting ready to step into.”

How do veterans handle it? “The freshmen need to know just give it your all,” senior tight end Caleb Bluiett said. “Don’t be afraid to step out on a limb. Just do your job, and everything will be all right.”

Buechele will get plenty of attention, whether he starts or not. Johnson and Duvernay were the two youngsters drawing rave reviews during training camp.

The 6-6 Johnson enrolled early in January so he could go through spring drills. Duvernay joined UT this summer as part of the fallout from the Baylor scandal. He came with offensive lineman Patrick Hudson, who may also turn up on the participation chart in September.

“From what I could tell, nobody really cared,” fellow receiver John Burt said of Duvernay. “He came in as if he had been committed since day one. It really didn’t matter to us in the receiver room whether he was committed to Baylor or not. When he came here, we took him in as if he was one of our own.”

On the defensive side, Gerald Wilbon and Jordan Elliott are two 300-pound defensive tackles that pushed their way around in August. Don’t forget about D’Andre Christmas and Marcel Southall, either.

Andrew Fitzgerald could blossom into a solid pass rusher. Erick Fowler got a slow start because of academic issues, but now he’s learning alongside sophomore Malik Jefferson.

“They know that there’s going to be a time where they can get on the field, and they understand that,” Jefferson said. “And they know that we’re going to need them. So we’re trying to get through their head that let us lead you, and you come behind and lead the next group. That’s how it has to be seen.”

It’s a young team overall, which has pros and cons. If these freshmen can make an impact like the sophomore class did, the Longhorns may compete for championships far sooner than anyone thinks.