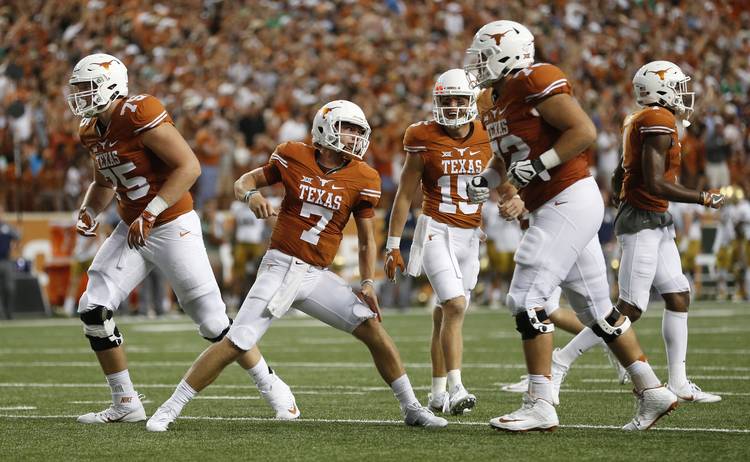 Shane Buechele considered the night a success. And why wouldn’t he?

After all, three of his Oklahoma Sooners-backing siblings were all decked out in their Longhorn finery along with a majority of the school-record 102,315 who shoe-horned their way into Royal-Memorial Stadium for a classic of a football game.

“Yeah, they were all wearing Longhorn shirts tonight,” Buechele said. “I was excited about that.”

Oh, the football game turned out all right, too.

The true freshman quarterback from Arlington Lamar, who is mature beyond his years and cool behind his ears, won over a legion of fans as well as his own tight-knit family with a spectacular performance that should go down as one of the greatest by a rookie leader in school history.

All the boyish-looking teenager with the peach fuzz and the aw-shucks demeanor did was direct the biggest victory in Charlie Strong’s 26-game tenure in Austin, an improbable, come-from-behind-and-ahead-and-behind, 50-47 double-overtime upset of 10th-ranked Notre Dame Sunday night.

“I was really calm, even though 102,000 people are a lot more than I’ve ever played in front of before,” Buechele said. “I may have played before about 15,000 people in a playoff game.”

Strong took it all in and saw that it was good. He deserved some good fortune.

The Texas sideline erupted in celebration when it was over, and why not? They’d squandered a 31-14 lead, fought back to tie the game and then delivered a signature victory for the beleaguered Strong after back-to-back losing seasons. His players tossed him over their heads and carried him around, and later, Chris Warren III and Kai Locksley rubbed Strong’s bald scalp while he did a national television interview.

PHOTOS: 150 IMAGES FROM THE LONGHORNS’ WIN OVER NOTRE DAME

This win wasn’t as big as Mack Brown’s comeback win over Oklahoma State in 2004, when Texas erased a 35-7 deficit for a 56-35 turnaround, setting into motion a season that ended with a Rose Bowl victory as a prelude to a national championship. But it probably matched a 1999 home win over No. 3 Nebraska that defensive stalwarts Casey Hampton and Shaun Rogers paced, a triumph that helped Brown turn the corner for the second of 12 straight spectacular seasons.

“We needed tonight to get this program back in the spotlight,” an emotional Strong said. “And this is a big win for us to get the program headed back. I know one game does not make a season. … But relief? No, because I’ve still got a few more to go.”

What the Longhorns’ momentous win in the first overtime ever played at DKR did was validate what Strong has been preaching about togetherness and tenacity and talent, qualities this team seems to have in abundance. And those all came together on a muggy Sunday when Texas took the measure of a potential national championship team and took out Notre Dame in impressive manner with the help of new offensive coordinator Sterlin Gilbert, who called a masterful game of power running and deep passes.

“I expected us to have this kind of success in this offense,” said John Burt, who hauled in a 72-yard touchdown pass but dropped another one of almost equal distance because of what he called a focus lapse. “They weren’t ready for it. We were popping plays, and they didn’t know what was going on.”

The local team that produced a scant 60 yards rushing and a meager three points in last year’s 38-3 blowout had a 100-yard rusher in D’Onta Foreman and a 100-yard receiver in Burt and finished with an eye-popping 517 yards this time.

So are the Longhorns a Top 10 team?

“I can’t say yet,” said sophomore linebacker Malik Jefferson, who had six tackles and a sack. “But anybody in our way is going to have trouble. So, potentially. Will we be this year? Yes.”

It just needs consistency, and 11 more games in which to show it. Much of that came from play behind center.

Texas found its quarterback. Again. Except this time, it might stick.

Actually, Strong found two quarterbacks because as brilliant a performance as the poised Buechele had, throwing for 280 yards and two perfect strikes for touchdowns, his backup might have been even better.

Tyrone Swoopes, the consummate, unselfish senior who has been such a lightning rod for criticism the last two years he must think he’s running for president, was masterful in his role of downhill runner in his all-but-unstoppable, short-yardage package. Swoopes bulled his way for 53 yards and three touchdowns, none bigger than his 6-yard burst into the end zone in the second overtime to set off a wild celebration as he was mobbed in the north end zone.

The savvy, pass-minded Buechele and brutish Swoopes have such dissimilar strengths that they complement each other like salsa and eggs, and both may be as good as they’re cracked up to be. One’s a wheeler, the other’s a dealer. Buechele got the start, and Swoopes applied the finishing touches.

RELATED: THE STORY BEHIND BEVO XV

A quarterback drama that began in the spring when Buechele appeared to outplay the erratically passing Swoopes came to a head in the days leading up the season-opener. Buechele said he didn’t learn he would take the first snap until he was told at the team hotel Sunday morning. When Gilbert was asked when the decision was made, the new offensive coordinator said, “Recently.”

Of course, Strong spilled the beans and said he had telephoned Buechele’s mother, Nancy, this past weekend and informed her that Shane would get the start. Buechele was standing next to his head coach and asked for her reaction.

There were only tears of joy on Sunday night as Texas may have embarked on a new era, one with both an old and a new quarterback.

Eyes on Texas: Longhorns have freshmen here, there, everywhere