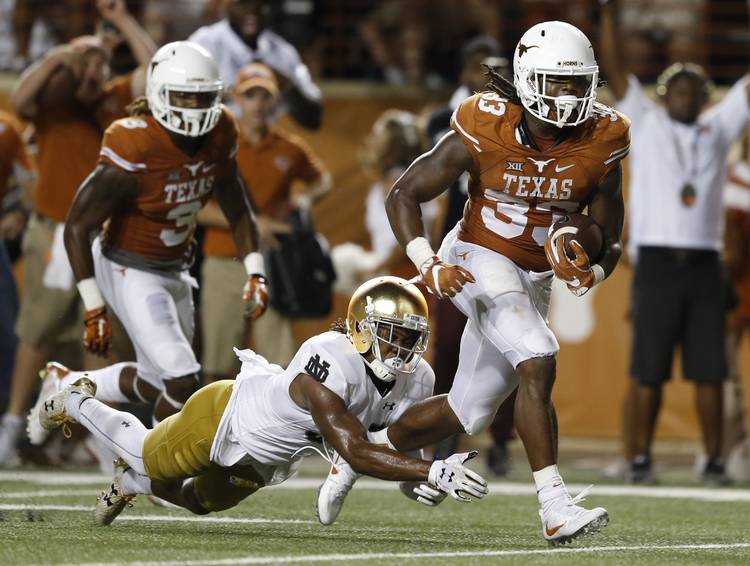 In one 5-minute, 13-second span of the second quarter, Charlie Strong’s vision became a scary reality for the nation’s 10th-ranked team. With Tyrone Swoopes operating his punishing 18-Wheeler package, the Horns bludgeoned Notre Dame’s defense on a statement 16-play, 88-yard drive that quickly served notice to a national television audience that Texas is quite capable of putting some hurt on opponents.

And boy did the Horns run it at the Irish in front of a crowd of 102,315, the largest to ever witness a game at DKR.

The 50-47 double-overtime win speaks for itself, but the most promising numbers were the 268 rushing yards the Horns stepped off against a team that expected to come in here and give a repeat performance of that 35-point South Bend blasting to open last season.

This wasn’t perfect by any stretch of the imagination, but the Horns provided a blueprint for success in coming weeks, months and seasons.  It’s what Strong envisioned when he replaced Mack Brown — having a physical running attack with big backs, an offensive line that can impose its will, and the quarterback taking downfield shots when necessary.

RELIVE THE GAME: 150 PHOTOS FROM NOTRE DAME VS. TEXAS

He also saw a playmaking defense that made things easier on his offense with takeaways and stops. Vance Bedford’s crew isn’t quite there yet, but on offense, we witnessed a rushing attack flex its collective muscle.

Strong couldn’t help but smile when describing the leather-strap toughness that the offense displayed.

On this night, it worked nearly to perfection. It’s the type of football Strong grew up watching. It’s the type of ball he wants to coach.  After all, he’s a defensive coordinator by trade and even though he brought in  Gilbert to add some pop and  sizzle to an offense not lacking in playmakers, it’s obvious that running the football in violent fashion right at the opponent feels like home.

BOHLS: TEXAS GETS SOME CONFIDENCE

The drive that put the Horns up 14-7 in the second quarter was much bigger than just scoring a touchdown to take the lead. It was how Texas did it, with the subtlety of a sledgehammer and the  frightening physicality that’s been lacking in these parts for quite some time.

Strong said Swoopes took the news of not starting like a pro. It’s quite possible that any frustration he might have been feeling was smartly taken out on the golden domers, who wanted no part of him by game’s end. That drive was  a picture of destruction. Swoopes worked from the shotgun but ran like a Sherman tank, plowing through Notre Dame for 31 yards on four carries.

D’Onta Foreman, who just might be the most underrated running back in college football — he has run for 157, 147, and 133 yards in his last three games, respectively — added two carries for 13 yards before Shane Buechele replaced Swoopes and led the Horns to the go-ahead points.

Winning the battle up front made life a lot easier for a quarterback who had never played in a college game and a senior who wanted to show he could still impact a game by coming off the bench. The line gave up a single sack and spent most of the evening in full attack mode.

All told, the Horns ran for 268 yards and averaged four yards per carry, one year after rushing for only 60 yards on 29 carries at Notre Dame.  The pups from that game appear to be maturing at just the right time, though one game does not a season make.

“We wanted them to know that we could run the ball,” said senior guard Kent Perkins. “We’ve had trouble with that in the past and that hurt us. We’ve worked hard in the offseason and we’ve gotten tremendously better. We want to keep getting better every day.”

Strong always had the blueprint for success with this club, but he didn’t have the pieces in place for success to happen on a consistent basis.

That drive showed us that Texas toughness is back in Austin.

It’s all Charlie ever wanted.

Bohls: Longhorns aren’t full of themselves after win, and that’s a good thing