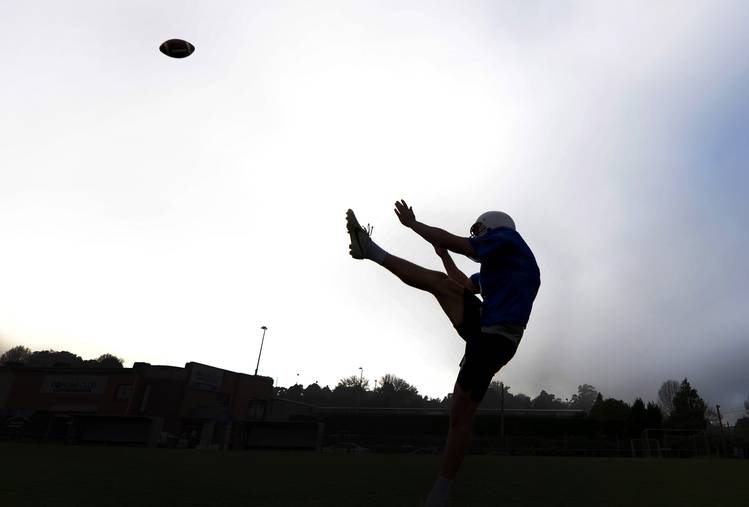 In this June 12, 2015, file photo, Michael Dickson practices his punting at the Prokick Australia academy in Monbulk, Australia. Thanks to the offer of a university education, the lure of travel and the opportunity to play in front of massive crowds, more than 30 Australians are now punting for U.S. schools at various levels. Almost all of them via Prokick. (AP Photo/Mal Fairclough)

Real men play Australian-rules football, not this namby-pamby stuff we do over here stateside.

“Punting was always a bit of a joke to me,” Dickson said last year for an article on the Sydney Swans’ official website. Teammates would challenge each other to American punting contests, and Dickson, who would end up punting for Texas, realized he wasn’t all that terrible. “They encouraged me to give it a go.”

Leaving Australia and punting in America couldn’t be all that bad, could it? It worked for Mat McBriar, who lasted 11 seasons in the NFL. Memphis’ Tom Hornsey won the Ray Guy Award in 2013. Tom Hackett won it in 2014 and 2015 with Utah.

Considering Dickson averaged 55 yards on six punts against Notre Dame in Sunday’s season opener, it would appear American football is going to work out.

Memo to any footballer back in Australia: Come on over. They’ll even give you a helmet and shoulder pads. You know, just for protection.

“Started in 2011,” Hackett told New York Jets reporters during training camp. “Went down, started kicking at the park, convinced my old man to spend about four grand to get coached for a year, then I was a one-way flight to Salt Lake City and never looked back.”

Dickson followed a similar route to the Longhorns. He worked on his punting for six to eight months, put a tape together and started advertising himself. Texas took a chance on him last season, giving Dickson a full scholarship. Or, as UT coach Charlie Strong calls him, “Aussie.”

“It kind of stared when I first got here,” Dickson said this week. “He probably didn’t really know my name straightaway. So ‘Aussie’ was the go-to.”

No telling what Strong thought watching his new punter during the first spring practice of 2015. With coaches, teammates and reporters watching, Dickson shanked his first ball so badly, it soared out of the fenced-in practice field and landed on Red River Street.

“I had never kicked in front of people rushing at me,” Dickson said. “I was looking at everyone running at and me and just thought, ‘Oooh.’ OK, I can chill. These guys are going to block for me. I can chill.

“Yeah, I was so embarrassed,” he added with a laugh. “I was embarrassed in front of all my new teammates. They’re thinking, ‘They got him from Australia and he kicks it onto the highway?’ Yeah, I was embarrassed. It as pretty obvious by my facial expression afterward that it wasn’t intentional.”

Dickson averaged 41.3 yards per boot as a freshman. That was fifth in the Big 12. His most memorable moment came on a botched punt, though.

Dickson dropped a snap at a critical moment late against Oklahoma State. The Cowboys converted the mistake into excellent field position and a late field goal to pull out a 30-27 win, a heartbreaking loss for Texas.

The one person ready to console Dickson? Longhorns kicker Nick Rose, who one week prior had missed a late extra point that could have forced overtime in a 45-44 loss to California.

“Yeah, I try not to think about it, but I don’t want to forget about it,” Dickson said. “I get reminded now and again. It’s disappointing that it happened, but I feel like it’s going to help me in the long run.”

If anything, Dickson said he’s trying not to think about anything this season. Don’t get bogged down in technique, he said. Just catch, step, drop and boom it. He certainly did that against the Irish, hitting punts of 57, 54, 40, 58, 64 and 57 yards.

When the game went into overtime, Dickson could sit back and enjoy up the energy created by 102,315 fans.

“I’ve never been to a game that big,” Dickson said. “When it went into overtime, that’s when I could really soak it in, because I knew I wouldn’t have to punt. I could sit back and look up and absorb everything.”

Nobody punts in overtime. “It’d be nice not to have to punt the rest of the year,” Dickson said.

Few punt coverage teams are perfect, so there will come a time when those Australian toughness shines through. “Aussie” will be ready.

“Great attitude, great work ethic,” Texas defensive coordinator Vance Bedford said. “He’s just one of the guys. Tough guy. He’ll stick his face in there. He’ll tackle you. He’s one of us.”

Longhorns, Aggies on the rise in my AP Top 25 vote

Bohls: So many terrific Texas receivers, so few balls to throw to them