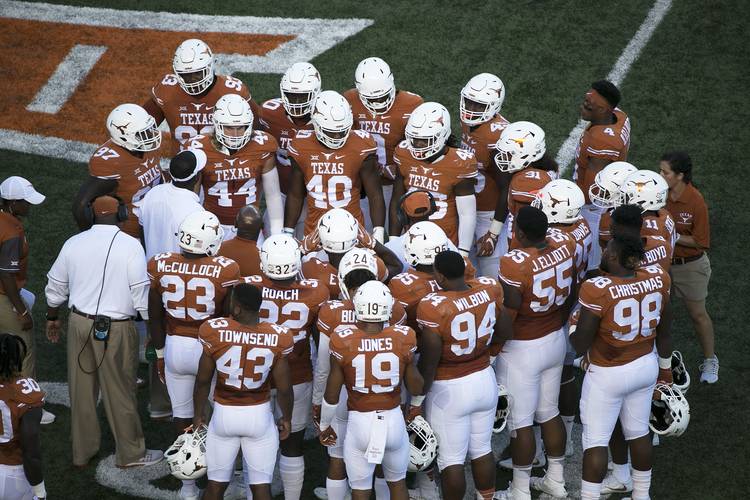 Remember back when you would walk into Royal-Memorial Stadium knowing that the home team would win 99 percent of the time?

Those Texas teams had great players that were a product of a winning tradition. Depth abounded. The question wasn’t if the Longhorns would win, but by how much.

This Texas team isn’t quite there yet, but the confidence level has never been higher during Charlie Strong’s time here.

The double-overtime win over Notre Dame didn’t come without sacrifice. Several big names were noticeably absent against overmatched UTEP on Saturday, but it didn’t stop hungry backups from helping the nation’s No. 11 team flex a bit of muscle in Game 2. The Longhorns’ 41-7 rout was posted with some of their most experienced players taking the night off. D’Onta Foreman, Kent Perkins, Connor Williams, Caleb Bluiett and Dylan Haines dressed, but didn’t play. Center Zach Shackelford left the game with an injury.

The result would have been even more lopsided had the Longhorns performed better in the early moments. Strong suddenly has gone from a coach desperate to beat anybody on the schedule to a man who’s in control of a young team of horses that’s only going to get better.

People keep asking if the Longhorns are back. I really haven’t had a definitive answer. But now? Yeah … I’m starting to feel like they are back.

We’re seeing depth emerge at key positions. A year ago, Strong probably would have pushed Perkins and Williams to play because there just weren’t enough linemen to field a credible unit up front. Fast forward to Saturday and players like Alex Anderson, Jake McMillon and Elijah Rodriguez gave the mainline guys a needed night off and kept their young quarterback relatively clean after allowing consecutive sacks in the second quarter.

“What I was preaching to our coaches is that we need to find 22 players on offense and 22 players on defense,” Strong said. “And the reason why I made the statement is that those guys all practice. I said, ‘We go out to practice, it’s the (No. 2) offense versus the (No.1) offense. Let them go play.”

And play they did.

Shane Buechele has channeled 2006 Colt McCoy and is enjoying spreading the ball around to a bevy of explosive young wideouts. He completed 23 of 28 attempts for 244 yards and four touchdowns. Testament to the aforementioned depth was Boo Jr. completing passes to eight different receivers. Only two went to his top scoring threat, John Burt. All four touchdowns went to players who entered the game having never having caught a scoring pass.

When asked if an improved passing game made things a lot easier up front, left guard Patrick Vahe said, “Oh my God, yes.”

Want another sign of progress in the areas of wins and depth? Texas didn’t play the cleanest game, yet won easily. The Horns had double-digit penalties for the second straight game, but led wire to wire. Real proof will come with a win at Cal, which isn’t a world beater without departed quarterback Jared Goff but remains one tough out at Berkeley’s Memorial Stadium, where the Bears have won six straight dating back to last season.

So here the Horns sit at 2-0 for the first time since 2012 with a rejuvenated head coach, a hungry fan base, some national buzz and a roster full of players who can’t wait to take on the next challenge.

Bohls: So many terrific Texas receivers, so few balls to throw to them