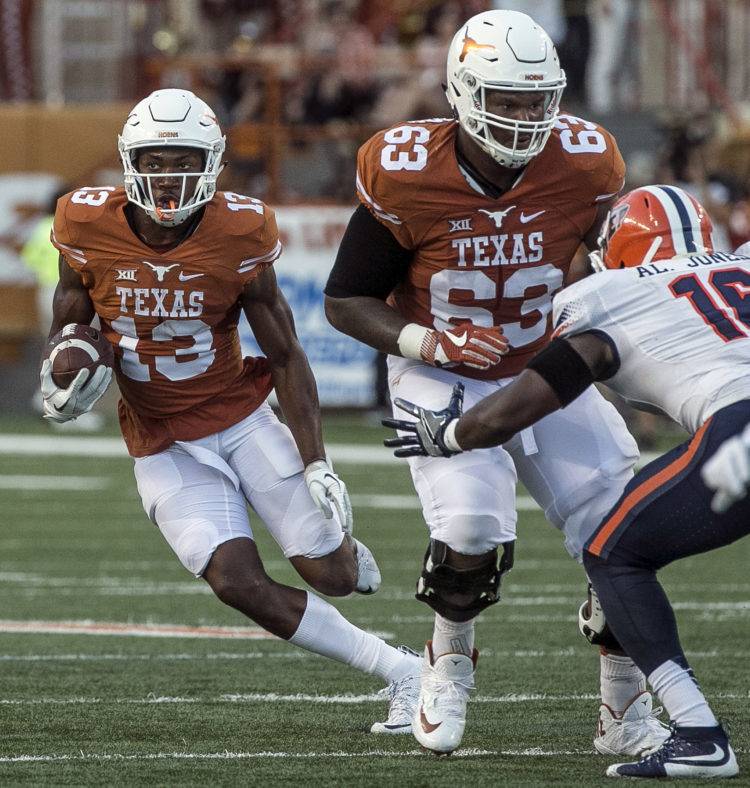 Jerrod Heard has already made a nice contribution at his new receiver position  but the former starting quarterback should see some snaps behind center against a defense that had no answers for him in 2015. Why not? Heard was unstoppable against Cal, especially with his feet.

While freshman starter Shane Buechele has been magnificent in his first two starts, I could see Heard getting some snaps at quarterback because the Bears are extremely vulnerable against the run, something he knows more than most. It may come at the expense of Tyrone Swoopes’ 18-wheeler package but if it adds up to big plays, so be it.  The coaching staff isn’t too keen on Boo Jr. running with the ball so Heard provides a nice complementary option in this matchup.

Cal represented Heard’s coming-out party when he rushed for 163 of his school record 527 yards of total offense in his first career start, the 45-44 home loss that ended with kicker Nick Rose missing an extra point that would have possibly sent the game to overtime.

Don’t be shocked if offensive coordinator Sterlin Gilbert gives him a series or two at. He did get a wildcat snap last week against UTEP and remains the team’s best open-field runner.

The Bears gave up 281 rushing yards and three touchdowns to San Diego State running back Donnel Pumphrey Saturday, so don’t be surprised to see offensive coordinator Sterlin Gilbert pound D’Onta Foreman and Chris Warren III in addition to lining Heard up at QB.

That part is up to the coaches,” Heard said, “but that would be nice if I can get back there and do some carries. I feel like we’re going to harp on those things that we think are Cal’s weakness.”

Cal lost two six of its top defensive linemen and five linebackers from last season’s team. It’s shown in the first two games where the Bears have been shredded on the ground. The Bears are surrendering 291.0 rushing yards per game, which ranks 125th out of 128 FBS teams.

Be it wildcat or just plain old quarterback, I wouldn’t be surprised to see Heard’s hands on the ball more than we’ve seen the first two games. He still doesn’t quite understand how it all went wrong for him at the position he’s played since childhood but he remains an elite runner when he gets his hands on the ball. Hopefully we’ll see him behind center for a series or two.

Golden: Stars of Texas’ yesterday are embracing the Longhorns of today