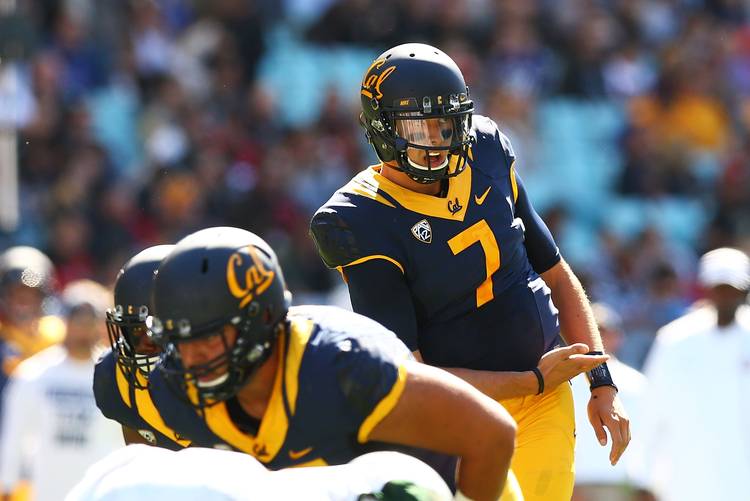 Cal quarterback Davis Webb (7) signals to a teammate during the College Football Sydney Cup match between Cal and Hawaii at ANZ Stadium on August 27, 2016 in Sydney, Australia. (Photo by Mark Nolan/Getty Images)

For a long time, Davis Webb has been all things Longhorn. In fact, the Cal quarterback desperately wanted to be a Longhorn.

He grew up as a Texas fan and adorned his room with everything burnt orange and white. He wore a Colt McCoy jersey and emulated his favorite quarterback. He’d been to a couple of games at Royal-Memorial Stadium and will never forget the October day in 2006 when he saw the redshirt freshman throw a school-record six touchdown passes against Baylor.

“I remember that one distinctly,” Webb said this week. “I was a big fan of the Longhorns.”

Webb also can remember hoping the Longhorns would recruit him. He grew up in north Texas with an athletic background. His dad, Matt, coached him as an assistant football coach and now works as the Frisco Centennial head football coach. His mother was an All-American tennis player at Abilene Christian. Webb played basketball, was a hard-throwing catcher and pitcher in baseball and dabbled in hockey.

But football became a passion for the 6-5, 225-pound senior. As an outstanding quarterback for Keller High School for three years and then for Prosper his senior year, when he took his team to the Class 4A Division II regional semifinals, Webb received only modest interest from Texas. He chose Texas Tech when the Longhorns were sold on Whitewright’s Tyrone Swoopes. The two quarterbacks attended the Elite 11 camp together and remain friends.

“They decided to go with Tyrone, and that was that,” Webb said. “I haven’t texted him this week, but I watched their Notre Dame game, and I have nothing but respect for Tyrone. He’s a great teammate and I’m happy for him.”

Swoopes said the two share snapchats, but haven’t talked lately. He thinks Webb has a “bright future” at Cal and possibly the NFL.

“We just kind of stayed in touch and talk to each other every once in a while to see how we’re doing and how our seasons are going,” Swoopes said. “Our personalities are similar. I’m more quiet than he is, but we’re both pretty laid back and relaxed. I think that’s what drew us together. As a quarterback, he’s shown that he can throw the ball really well.”

At Tech, Webb couldn’t wait to play Texas. He’s still waiting. He started 14 games for Tech over three year, but none against Texas. He alternated with Baker Mayfield his freshman year, broke his ankle the week before the Texas game the following year, and backed up Patrick Mahomes his last year at Tech before graduating in 3 1/2 years. So in his three Texas-Texas Tech matchups, he never saw the field.

The chance to finally play the Longhorns will come Saturday when he leads his Golden Bears in his first home game for his new team, which he chose over Colorado and Auburn. “He’s supposed to be at Colorado,” Texas defensive coordinator Vance Bedford joked.

”I think the kid’s a special talent,” Bedford said. “We are going to have our hands full.”

Webb researched Pac-12, SEC and Big Ten teams and quizzed his friend and Cal predecessor Jared Goff before picking Cal. He’s played two games on the road, winning against Hawaii in Australia and falling to San Diego State on the road when he threw a mind-boggling 72 passes. He ranks second nationally with 963 yards passing and tied for first with Mahomes with nine TDs.

If Webb were still at Tech, Bedford said he’d put him “in the top four” of the Big 12’s best quarterbacks.

In three years at Tech, he threw for 5,557 yards and 46 touchdowns, became the youngest captain in school history, was named the Holiday Bowl MVP after dismantling Arizona State, and broke seven Big 12 freshman records. He loved it there, but left the school that’s become Quarterback Transfer U, following Michael Brewer and Baker Mayfield out of town.

So is Berkeley a tad, uh, different from Lubbock?

“Yeah, 100 percent,” Webb cracked. “A complete 180. Lubbock may be the most conservative city in the country, and Berkeley may be the most liberal. It’s been a cool change in spirit, and my teammates have been awesome.”

He showed up on campus last May 26. That afternoon, he texted all his wide receivers and asked who was available to catch passes. And so the bonding began.

They needed it because Goff left as the No. 1 pick in the draft after setting 26 school records, including 12,220 career yards and 96 touchdowns. And he took Cal’s top six wide receivers with him. Not to the Rams, who could use more weapons, but they all are gone, leaving Webb with no target with more experience than Chad Hansen, who had 19 catches last year. He’s got 28 already.

He can’t say the same for a leaky Cal defense. But Webb will do his part in what could shape up as a shootout.

This mature quarterback who posts his daily, weekly and season goals on his mirror will try to reach them against Texas.

“I’ve been doing that since the seventh grade,” he said. “But I’ll keep them to myself.”

He can check off another one after Saturday’s kickoff.

Eyes on Texas: Charlie Strong refuses to let seniors get pushed aside

Bohls: Vance Bedford is holding Texas back from taking that next step