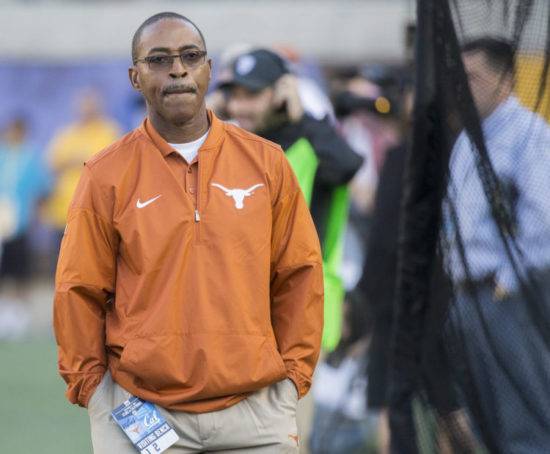 The Texas Longhorns were a sieve on defense at Cal.

Vance Bedford’s group struggled up front but suffered an utter collapse on the back end. The secondary, thought to be a strong unit, was embarrassed Cal QB in Davis Webb, who threw for 396 yards and four touchdowns and a good receiving unit led by Chris Hansen who caught 12 passes for 196 yards and a pair of scores.

The offense is finally good enough to win games but the Horns can’t go on like this on defense, not if they want to win 8-plus games this fall. Charlie Strong should go against his nature and take over this group else the Horns are going to repeat past failures. After the 50-43 loss, Texas is giving up 34.6 points per game  through three contests and has yet to play against high-powered offenses Oklahoma State, Baylor, Oklahoma, and Texas Tech.
The improvement on offense is being blunted by a defense that seems to be on its heels more often than not. In truth, it has a real Manny Diaz feel to it.
Remember when BYU’s Taysom Hill ran roughshod over the Horns in that 40-21 loss in Provo three years ago? It was two games into the season and Mack Brown made the surprising decision to replace his defensive coordinator Diaz with Super Bowl winner Greg Robinson.
I don’t expect Charlie Strong to fire Bedford but he has to take an even bigger role in defensive meetings because Bedford’s defense looks almost as bad as that punchless bunch he coached last year. The Horns have finally figured out how to put some points on the board but are giving up just as many (if not more) in the process.

Texas will use the bye week to hopefully clean up the mess that is the defense, particularly the secondary which will get to face Oklahoma State boasts QB Mason Rudolph, who threw for 540 yards and two touchdowns against Pittsburgh Saturday and Texas Tech’s Patrick Mahomes II who threw for 470 yards and five touchdowns against Louisiana Tech.
Far too often you saw Cal receivers running past Texas defensive backs who were totally out of position. The chronic lack of communication leads to those breakdowns. The players shoulder some of the blame but ultimate responsibility lies with the coaching staff. The refs blowing that fumble call at the end wasn’t nearly as frustrating for Texas fans as a defense that took a humongous step back.
Strong was the defensive coordinator on two national title teams at Florida but what we saw at Berkeley was far from title worthy. The same breakdowns that killed the Horns at times last season showed up again and against a really good offense.
With the Big 12 opener coming up at Oklahoma State after the bye week, Strong should seriously consider becoming the play caller on defense because the current arrangement suggests doom is coming with vengeance.

Bohls: Vance Bedford is holding Texas back from taking that next step