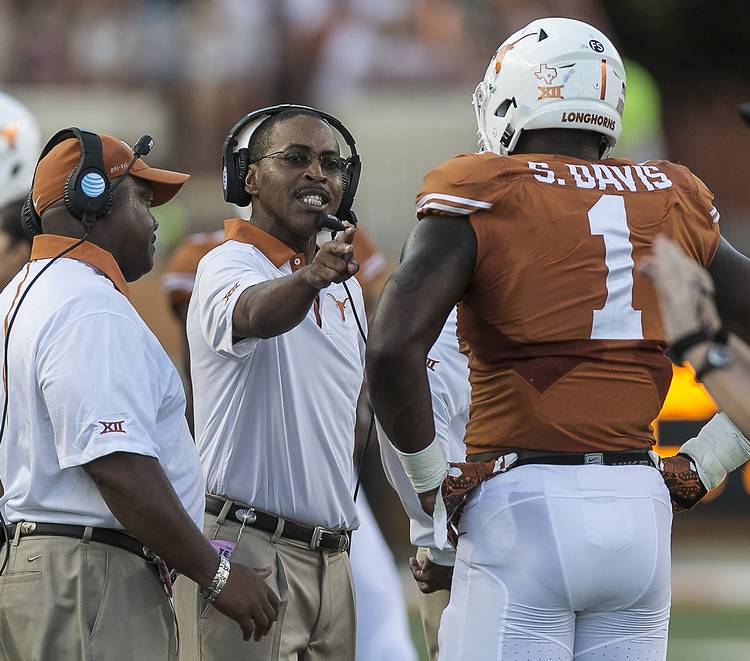 Paul Boyette Jr.’s an angry, young man and said so.

Kent Perkins is also an angry, young man and spoke his mind as well on Monday.

Charlie Strong’s an angry, older man. He talked, too.

Vance Bedford’s likely to be equally angry, especially if he’s demoted from defensive coordinator, but he deserves his fate after a defensive meltdown in a 50-43 loss at California on Saturday that actually should have been a touchdown worse if not for Vic Enwere’s brain fart at the goal line.

There’s a lot of anger going around these days after the Bleakness in Berkeley. Players, coaches, alumni, fans, even Bevo XV and the waterboys.

That’s the result of a monumental failure in Cali after Texas had upset Notre Dame and clobbered UTEP to go 2-0 for the first time since 2012. When a defense ranks 105th nationally in points allowed and 70th in yardage, folks get mad. When an average team like the Golden Bears score seven touchdowns — technically, it should have been eight, remember — in 18 possessions, that’s a colossal disaster.

Ponder those numbers for a minute. So anger is understood.

Strong said he would evaluate his entire staff in the two weeks before Texas plays again when it travels to face Oklahoma State, a team that but for a Hail Mary would be 3-0 and maybe ranked in the top 10. Does it really take two more weeks to assess the situation and determine the obvious, that defense is keeping the Longhorns from being a formidable team? It shouldn’t. There’s no time like the present.

“Not only me,” Strong said, when asked if he could assume the reins of the defense, “but there’s other guys sitting there with the capabilities of taking over the defense.”

Consequently, Strong should demote Vance Bedford immediately and let him focus on coaching up the secondary. He should promote linebacker coach Brian Jean-Mary to co-coordinator and entrust him with calling defensive plays. He should rectify the bleak atmosphere on that side of the ball, get more involved on defense, rely more on younger players like Malcolm Roach and Brandon Jones and jump-start the season before Big 12 play begins.

Short of that, Strong should ask Gregory L. Fenves to gas up the private jet again. It worked last time, thank you, Sterlin Gilbert.

Why put off the inevitable? Strong had no problem removing play-calling duties from Shawn Watson after a single game last season. He’s shown he’s not above making the hard decisions, even in midseason. Otherwise, loyalty could have a steep price.

“It’s about demanding what needs to be done,” Strong said in answering a question about communications breakdowns on the field. “Don’t tell me, ‘Well, I told him.'”

Answers are in short supply, which is why Boyette said, “I’m a good angry.”

Hopefully Charlie is, too.

And Boyette’s one of the Longhorns who’s playing very well. In fact, the defensive line may be playing better than any other unit on the team outside of the running backs and quarterbacks.

So was it overconfidence by the team, more than a touchdown favorite over Cal?

“I don’t think we were overconfident,” Boyette said. “I think some people got complacent from being 2-0.”

Hopefully, the anger is not misplaced. The six players who came to Monday’s press conference all said there was zero finger-pointing in the locker room. Perkins, the senior member of the offensive line, agreed he was angry as well but, after making his comments, he returned to make clear to a few reporters that he was mad at the situation, not his teammates.

Asked to describe the mood of the team, Perkins said, “Guys were down. Sad. Angry. We played at a level we shouldn’t have played at. Why? It came down to preparation and a lack of focus.”

Perkins saw the same as Boyette. And said he almost saw the loss coming when Strong reamed out the team after a lethargic walk-through before Cal late last week.

“Yeah, there were some (warning signs),” Perkins said. “And things I probably should have said something about. Some of the young guys were not being focused. Coach Strong got angry.”

He should have been. Strong said he can fix the problem. But he’s said that before, which is why he’s 13-15 at Texas. Saying it and doing it are two different things.

It’s up to Strong to put the right coaches in charge, but it’s up to the players to perform at a higher level. Players like Boyette and Perkins understand that. So does Charlie.

“Now, you’ll see who the leaders are,” Strong said. “They’re frustrated and let one get away from us that we shouldn’t have. The defense will get fixed. Whatever I need to do to get it fixed will happen.”

Otherwise, get the jet out of the hangar.

Eyes on Texas: Could personnel, not scheme changes help Horns?