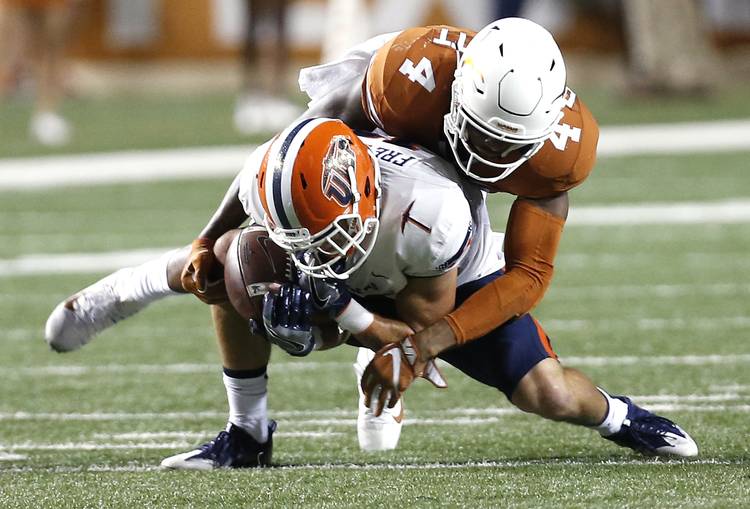 Texas safety DeShon Elliott (4) tackles UTEP's Mack Leftwich to bring up a fourth-and-1 in the second half at Royal-Memorial Stadium, Saturday, Sept. 10, 2016. (Stephen Spillman / for American-Statesman)

What’s so mystifying about the Texas defense is that the quality of secondary play has been a complete departure from Charlie Strong’s historical norm.

OK, so the Cards dropped to 68th overall in 2011, but the team allowed an average of 227.4 passing yards per game. That’s not much in the grand scheme of today’s college football.

In Strong’s first year at Texas, the pass defense ranked 11th nationally. Of course, that unit had future NFL defensive backs Quandre Diggs, now with Detroit, and Mykkele Thompson, now on injured reserve with the New York Giants. That unit also featured Jason Hall and Dylan Haines, who are still around today.

Last season, the pass defense was tied for 74th nationally and is 73rd so far this year. In three games, Texas has allowed a Big 12-high nine passing touchdowns — one more than Oklahoma — and collected no interceptions. Strong used the phrase “we’ll get it fixed” numerous times during Monday’s press conference. Fans interpret “we’ll get it fixed” to mean “I’ll fire Vance Bedford,” but is changing defensive coordinators really some magic cure-all? Or could the Longhorns see better results simply with personnel changes?

“It goes back to just accountability,” Strong said. “I told our coaches that you’re a direct reflection of your position. I expect each and every week when we go out to compete, coaches are held accountable just like I’m held accountable for how this team goes out and performs. But we all are accountable. We need to coach better, coach harder and be a lot smarter.”

It doesn’t help that Strong operates in a league with pinball scoring. Big 12 teams averaged 34.9 points per game last season. Pac-12 schools averaged 32.8 points while the SEC, Big Ten and ACC teams all averaged in the 20s. This season’s numbers are skewed because scoring normally goes down in conference play, but the Big 12 leads the pack again (38.8).

The secondary is always a hard unit for outsiders to gauge because coverage responsibilities may not be obvious to the naked eye. Everybody knows when a receiver bolts past the cornerback in one-on-one coverage and scores. But was that corner supposed to have safety help over the top?

The stats don’t lie, though.

As a freshman last season, DeShon Elliott had two interceptions, three pass breakups and one forced fumble in only six games. He’s already had a sack and fumble recovery this season. Freshman Brandon Jones, who has blocked two punts in two weeks, should get a long look early against Oklahoma State. Let’s see if he truly is the nation’s fifth-best safety prospect, as recruiting services labeled him.

“He’s someone you gotta get on the field, you’ve got to see more of,” Strong said of Jones.

Elliott and Jones aren’t the only two young playmakers who deserve more playing time. Outside linebacker Malcolm Roach and defensive end Breckyn Hager should be on the field a lot against the Cowboys. Those two have combined for four sacks in the last two games.

Malik Jefferson hasn’t done much yet this season. He’s credited with 19 tackles, but hasn’t made any game-defining plays. He, Anthony Wheeler, Timothy Cole and Jeffrey McCulloch all will find themselves in open space having to guard slot receivers or running backs on wheel routes in the coming weeks. That’s just as important to the pass defense as the safety and corner play.

Always remember, Strong is the type that will never throw a player under the bus publicly. He’d rather stand before reporters and take the slings and arrows before calling out his players. Same goes for his assistants. They’re in the soup, too, if that means protecting the players.

That’s why dumping Bedford isn’t necessarily a must. Perhaps if the Horns change some on-field personnel and demand more consistency, the pressure will subside.

Bohls: Charlie Strong and his players are angry, but are they angry enough?