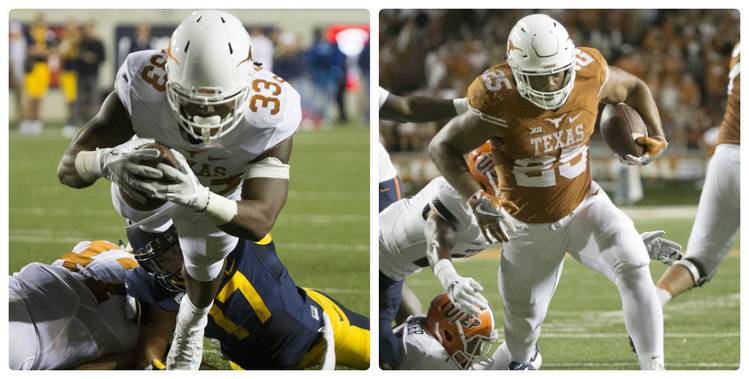 Texas running backs D'Onta Foreman, left, and Chris Warren III, right, are key reasons why the rushing offense is putting up numbers not seen since the 2005 season. (American-Statesman staff photos)

D’Onta Foreman has no breakaway speed.

Put ’em on diets. Both 250-pounders are simply too big to be effective, elite running backs.

Quick, somebody come up with more bulletin-board put-downs they can use to stoke Foreman’s and Warren’s internal fires. Both bruisers love the fact some questioned their abilities prior to this season. Not anymore. Texas coach Charlie Strong is about to unleash both on Oklahoma State and everyone else in the Big 12.

No. 22 Texas is averaging 238.3 rushing yards in three games, the team’s highest total since 2005. Seems like a dominant ground attack led to something big 11 years ago, too.

“I still feel like, to this day, that I don’t get the credit I might want or some people say I might deserve,” Foreman said. “It doesn’t bother me. I just keep going.”

Last season, it was learned that Oklahoma had offered Foreman’s brother Armanti a scholarship initially, but not him. D’Onta took it out on the Sooners with 117 yards on nine carries, including one that went for a game-changing 81 yards. This season, he’s averaging 6.4 yards per attempt.

“I might as well just get a tattoo of a chip on my shoulder because it’s there,” said Foreman, who actually has a dazzling tattoo of his brother Armanti on his back already.

Warren caught fire late last season, putting up 276 yards in a dazzling display Thanksgiving night against Texas Tech. He had 119 yards and two touchdowns against Cal. With Foreman and Warren leading the way, the Horns had 307 rushing yards against the Golden Bears.

“We wanted to dominate them, and I feel like that was what we tried to do,” Warren said. “I think that would be a very good platform for us to go off of.”

Every time Strong talks about his team’s overall status, he refers to “two big backs” or he’ll say, “you got Foreman and Warren back there.” This is the best 1-2 running back power punch Strong has had in Austin. Foreman has better lateral movement and speed; Warren simply gets moving and smacks people down.

Behind those two, it’s no wonder Tyrone Swoopes’ 18-Wheeler package is so effective. In 21 carries, Swoopes has lost only 1 yard.

“I think we’ve had a start,” offensive coordinator Sterlin Gilbert said. “Both of those backs have done a good job.

Asked what could improve, Gilbert said, “Just continue to be better at understanding our scheme and knowing where those guys need to hit holes and how to do it and play within what we’re asking them to do.”

Foreman said, “We’ve just got to be physical like we’ve been. We can’t change up. Just run the ball physical, get the ball to the perimeter and make some plays out there.”

For all of its high-scoring hype, Baylor led the nation in rushing the last three years. The Bears rank eighth nationally after four games this season. Texas sits 22nd overall.

Remember how many thought Texas’ spread offense might fare better initially because of the talent level already on campus? Well, three games in, Texas has put up more points (44.7) and total yards (500.3) than Baylor did its first three games in 2008, 2009 and 2010.

The Bears really went to warp, even ridiculous, speed in 2011.

It’s all because of what happened on the ground. Same holds true for Texas.

Strong was deeply troubled by the fact Texas ran the ball so well at Cal only to lose. Any team that scores 43 points and runs for more than 300 yards should win easy, in Strong’s mind. Texas’ defense has been verbally spanked the last two weeks, but let’s not excuse the offense completely. Penalties short-circuited some key second-half drives against Cal. The offense also got stoned late from its own 21-yard line — three plays, no yards and a punt.

“We played good, but we didn’t play great,” Warren said. “And we could have played great in that game, for sure.”

Everyone inside the football complex has high hopes for this offense going into conference play. Foreman, Warren and an offensive line led by Connor Williams and Patrick Vahe plan on paving the way.

“I feel like if I ever got complacent, then things would change for me. So I’ll never be complacent,” Foreman said. “I’ll always feel like I’ve got something to prove every game.”

Golden: Is the Big 12 the worst defensive conference in the country? You bet it is