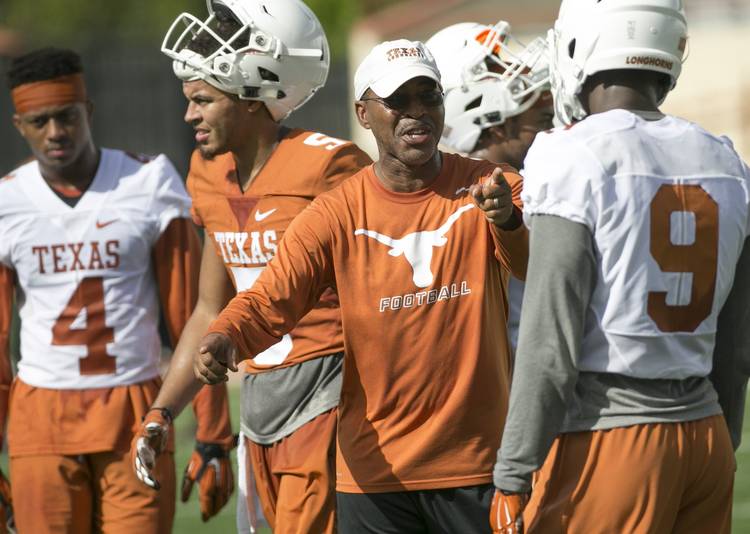 Such is life in the worst defensive conference in college football.

Longhorn Nation is well aware that this season’s tale will have something to do with what happens in these first two Big 12 games. Will the tests at Oklahoma State and in Dallas against Oklahoma come to be known as Charlie Strong’s Texas Waterloo? Is Vance Bedford a dead defensive coordinator walking? Will young bucks like Breckyn Hager, DeShon Elliott and Malcolm Roach make life tougher for opposing quarterbacks?

Those questions will be answered in quick order.

To be fair, Texas’ defensive problems aren’t an anomaly in these parts. Stops are hard to come by these days, not only in Austin but in places like Lubbock, Lawrence, Ames, Fort Worth and even Norman.

That got me to thinking about those pinball machines masquerading as scoreboards in Big 12 stadiums.

This league has only two teams ranked in the top 50 nationally in total defense, which is the worst representation among the Power 5 conferences. Percentage wise, that’s 20 percent.

Kudos to the Kansas State Wildcats for being No. 1 in the country. The Cats limited Stanford to 26 points in the season opener and are allowing a scant 179 yards per game, but that came after they fattened up on Florida Atlantic and FCS school Missouri State.

Baylor is ranked No. 22 nationally after blasting non-Power 5s Northwestern, SMU and Rice before a credibility-building 35-24 win over Oklahoma State.

Of the other conferences, the Big Ten placed nine teams inside the top 50 (64 percent) while the ACC was next with eight (57 percent). The SEC placed five (35 percent) while the Pac-12 had four (33 percent). Those numbers come with the understanding that the Big 12 houses some of the best offenses in the land with seven schools — including Texas at No. 22 — ranked in the top 50 in total offense. The question is, are those numbers a product of great offenses or poor defenses?

I’m thinking it’s a little bit of both.

The Horns are much better on offense than they have been under Strong, but this offense is not built for shootouts because the defense has been burned far too often on the back end, be it because of a lack of pass rush up front or poor communication in the secondary.

“A lot of people think that this is a pass-happy league, when really it isn’t,” Strong said. “If you watch the good teams in this league, it’s a good mixture of run and pass because they’re very balanced, and even with us defensively, we give up plays, but I still say this: If you play smart, you can prevent those big plays and put your players in position where you don’t give them up.”

Sure, the game has changed. Alabama’s recognized as much. Nick Saban dispensed with the ground-and-pound style that has come to symbolize the SEC in favor of a more wide-open attack that mixes in the run while consistently taking deep shots in the passing game. His rival Les Miles didn’t embrace change as quickly, choosing instead to stick with the run-first mentality. That stubbornness is part of the reason he and offensive coordinator Cam Cameron got the gate at LSU.

As for the Big 12, it will continue to be an offensive circus and Texas’ offense will be forced to keep up or perish under the weight of video game numbers. Meanwhile, the defense is facing its most important stretch of the season.

Can it hold up in what promises to be a wild one in Stillwater?

Where Big 12 schools rank nationally in total defense, as well as how many offensive touchdowns they’ve allowed and how many yards per play they’re averaging: