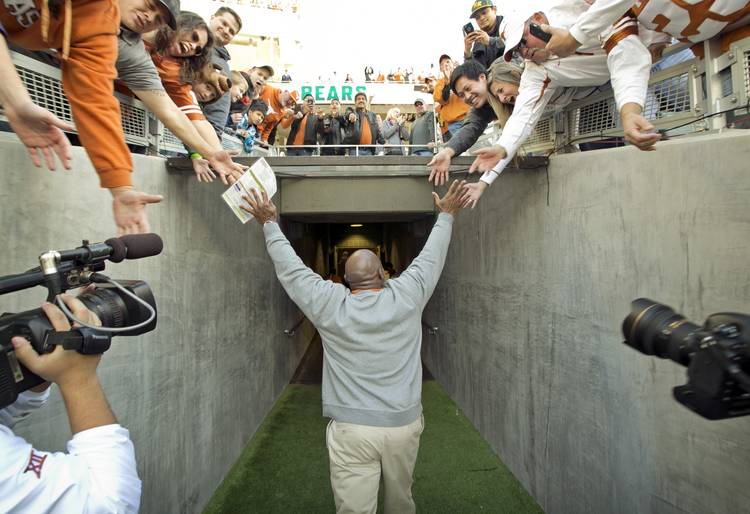 Charlie’s fast running out of scapegoats.

Super booster Red McCombs may have been right when, at the time of Strong’s hiring, he objected and said Strong might make a great position coach or “maybe even a coordinator.” Guess we’ll find out the answer to that because Strong, as of Monday, is the new defensive coordinator of his 2-2 football team.

As well as head coach, at least for now.

The move continues to reflect Strong’s inability as CEO to oversee his program and run it efficiently, and it underscores a basic concern that Strong might not be equipped as a decision-maker — on the sidelines or off — to handle a job as big as Texas. He’s operating on a margin of very little error and could be another embarrassing loss away from losing the support of his administration, which desperately wants him to succeed.

Could Charlie Strong’s Oklahoma State debacle be John Mackovic’s UCLA? The final straw? So what does Strong need to do to save his job?

But that source didn’t sound the least bit optimistic that Strong was capable of that. Even a win over Oklahoma would be taken with a grain of salt because it’s still fresh in the minds of fans that Strong whipped the Sooners a year ago, only to get shut out by feeble Iowa State on the road two weeks later.

“I do not think there is a chance he goes 6-2 in his last eight games,” the source said.

So is the die already cast?

What are the chances Strong survives? Is it 50 percent? Or 25 percent? Less?

And that wouldn’t cut it because that would put Strong’s UT record at 17-20. The Bedford demotion is the latest sign of mismanagement. After 29 games, Strong has demoted, fired or accepted the resignation of eight assistant coaches. Four were coordinators. Charlie’s obviously running out of people to fire, which can only mean one thing.

Or could be, unless he directs a massive turnaround that emphatically represents progress, which has been sorely lacking if not invisible. Texas has never fired a coach in midseason, and I don’t think it will stray from that history. But where’s the progress? Where’s the tackling? Where’s Tom Herman when you need him?

Monday was also noteworthy in that athletic director Mike Perrin showed up for the first time ever. A spokesman said Perrin dropped in to “stop by to see (Strong) and show support.” Strong took his rare appearance in stride, jokingly suggesting, “I guess he wanted to make sure I haven’t jumped off the stadium.”

Strong remains one of the most likeable personalities ever and someone whom his players seem to universally respect. Reporters like him.

Asked why fans should have faith that Strong can fix this, he said, “I would hope they believe I can.”

I fear Strong has lost the backing of a big portion of the fan base and the ex-players, including two who are still pulling for Charlie.

“He had the ex-players solidly in his camp until these last two games,” one prominent former Longhorns letterman told me. “Not so anymore. Probably 50/50 now. Everybody likes Charlie and really wanted him to succeed. Those last two games, we looked totally unprepared on D, and that’s coaching. If we get blown out this weekend, the die is cast.”

Another big-name Longhorn from the Darrell Royal era said Strong lost favor with him when Strong publicly criticized Bedford.

“I cannot imagine DKR doing that,” he said. “Personally, I like Charlie and I hate to see this happening to him. Most if not all my teammates like him. Clearly, Bama, Ohio State, Michigan and Wisconsin are teaching old-school defense. I do not believe Vance Bedford can or will.”

Texas fans won’t have Bedford to kick around any more although he remains as co-secondary coach. Strong’s still here. The question is for how long.

Bohls: Bob Stoops, Charlie Strong both find themselves against a Red River wall