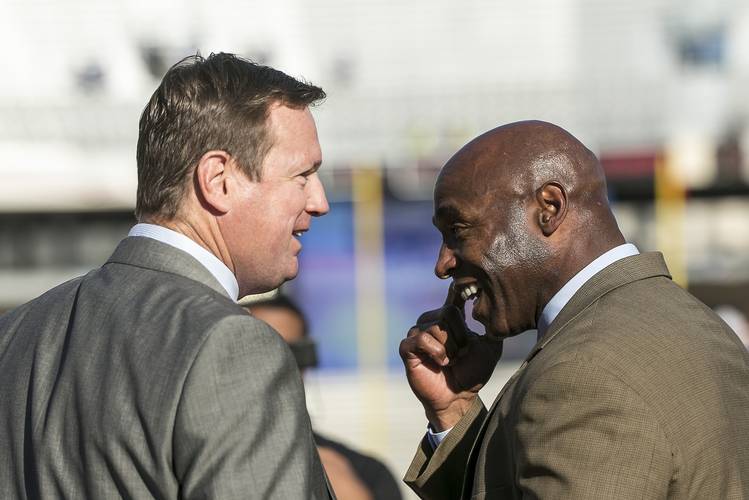 Bob Stoops keeps things to himself. Including a lot of Big 12 championships.

But he keeps all things close to the breast. Fort Knox isn’t as guarded as Oklahoma’s coach.

Which is one reason he’s survived in Norman for 18 years. He’s always looking to the next game. The next quarter. The next down, if you will.

It’s all about championships. Brown knew that. So does Stoops, and the fact that his only one was 16 years ago hasn’t sat all that well with some of the Boomers, even though Stoops remains an elite coach and the best one not named Nick Saban or Urban Meyer. This week, Stoops told me he’s not sure if Oklahoma is his last stop, saying, “I have no clue. I’m only 56. I’m not as old as you.”

Some fans have said, quite vocally and wrongly, that Stoops has stayed too long.

Of course, some are saying the same thing about Charlie Strong. And he just got here.

Strong’s only been here for 29 games, hardly 18 seasons. And he’s 1-1 in this rivalry that reconvenes Saturday at a quaint little fairgrounds in Dallas, where blood pressure and cholesterol soar for those who consume everything deep fried from blackened shrimp baked potato to bacon mozzarella cheese sticks. And both coaches know they could be deep fried if they don’t do well in this series. Stoops is 10-7 against Texas.

Lose on Saturday, and Stoops already has three losses in the first half of the season. People are unhappy.

Lose on Saturday, and Strong may not get many chances to lose more. People are livid.

Stoops knows how much heat Strong is getting because he’s getting the same, if for entirely different reasons.

Strong’s the wrong coach, many feel. Stoops was the right coach, but created his own monster by averaging at least 10 wins over the last six seasons. Strong would kill for 10 wins in one season. Stoops’ team looked bad in losses to Houston and Ohio State this year before outlasting TCU on the road last week. So did he change anything?

“No,” he said emphatically. “What could you change in a short amount of time?”

What, indeed. Strong, who demoted his defensive coordinator on Monday to assume the duties himself, is about to find out.

Regardless, Stoops’ team looked pretty good the last time out. How good?

“We’re still finding out,” Stoops told me this week. “We’ve still been inconsistent, but there’s still a lot of good in there.”

With a tight road victory over Big 12 challenger TCU in Fort Worth last weekend, the Sooners are set up to make their mark again and stake their rightful claim to the conference crown, one they’ve collected nine times in Stoops’ 17 years. Nine. More often than every other year. Mack won two in 16 years.

But for all those conference trophies with Stoops’ name on them, they might as well be stuffed bears from a carny game. Looks great when you’re toting it around the Cotton Bowl, but in the end it occupies a forgotten spot in the back of the closet. And that’s a shame.

Win the conference in most years and you’ll be in line for a College Football Playoff spot. And 2-2 OU just might if it can run the table. Stoops doesn’t get enough credit for those nine crowns.

“Probably,” he said without going all Odell Beckham Jr. “I don’t bother trying to figure it out.”

For most fans, they couldn’t care less who wins the conference. Is that a side effect of the CFP? “Probably is,” Stoops said.

But he lives with it, same as Strong does. Charlie got the best of Bob last October and body-surfed all over the Cotton Bowl after a win that was supposed to turn Texas around. It didn’t. But it still stung Bob.

“That was them being a lot tougher than we were,” Stoops said. “They were more physical. And a lot better-coached.”

The Sooners may have been flat, deluded by a notorious 50-7 Texas loss to TCU prior to last year’s game. Were they?

“I don’t speculate on that. That’s up to you,” Stoops said. “Usually can tell (if your team’s flat). But we were ready to go and they kicked us.”

Excuses are for losers. Besides, who’d listen?

No one listened to Les Miles when he was let go by LSU before the calendar said October. Stoops called Miles’ firing “unfortunate,” but adding a postscript.

“I think it disrupts the year,” he said, “but I also know if you knew for sure that was the direction you were going to go, why lie about it for a month or two if you know that’s what you want to do?”