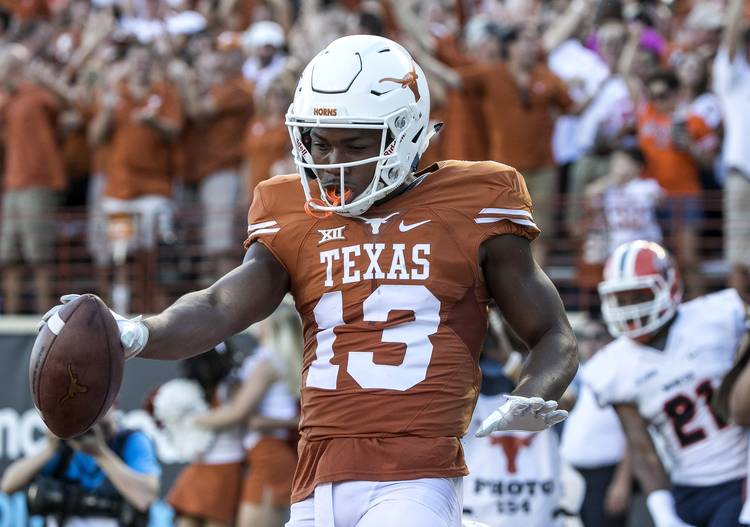 Texas offensive coordinator Sterlin Gilbert promised there’d be plenty of balls for everybody this season.

Four games in, we’re getting a better idea how the Longhorns spread it around and who’s making the most of their opportunities.

Quarterback Shane Buechele clearly likes looking for John Burt and Armanti Foreman out wide, based on the number of times they’ve been targeted this season. But inside receivers Jerrod Heard, Jake Oliver and Jacorey Warrick are doing far more damage on shorter routes in traffic.

Some teams highlight only one playmaker, and to be clear, there’s nothing wrong with that. Think Cal’s Chad Hansen, Texas Tech’s Jonathan Giles or Oklahoma State’s James Washington. The Longhorns have five established receiving threats with three freshmen cooling their jets.

“We feel strong about distributing the ball to all of our playmakers, whether it be the running backs, the quarterbacks and even those receivers,” Gilbert said. “So it just depends game by game and even quarter by quarter based on production and depending on what you’re getting from the other side of the ball.”

The Sooners’ defensive coaches have an idea who the Horns like, but they likely can’t assign shut-down coverage help for any one particular Longhorn.

What a good problem for Buechele.

“Even Lil’Jordan (Humphrey) got a ball in the last game, and I didn’t even know he was in the game until I threw it to him,” Buechele said. “But that’s just a comfort thing. No matter who’s out there, you just feel comfortable and you’ve gotta get them the ball.”

It appeared early as if the Longhorns wanted to make speedster John Burt a primary weapon. Burt was targeted 12 times in the season opener against Notre Dame, far and away the highest total of any individual player in any one game so far. He finished with six catches for 111 yards.

But Burt’s production has tailed off, and Gilbert finally conceded that Burt was battling a hand injury. He was targeted only four times against Oklahoma State and had just two catches.

Jacorey Warrick was one of Buechele’s favorite targets against UTEP. The 5-11 senior was targeted seven times and had seven catches for 73 yards. Foreman had a team-high eight targets against California but reeled in only four catches. Oliver (seven targets, four catches) was the go-to guy against OSU.

Who’s been the Longhorns’ most consistent threat? Former quarterback-turned-receiver Jerrod Heard. The sophomore has been targeted 18 times and has 14 catches for 166 yards and two touchdowns.

“With our room, it’s basically like saying, ‘We know we’re going to succeed,’” said receiver Dorian Leonard, who had a 49-yard catch in Stillwater that set up a touchdown. “So when we see somebody else out there making plays, it’s like seeing little brother at his game scoring his first touchdown. We haven’t really had a problem with the ball getting spread around.”

The Texas sideline got a real charge out of watching tight end Andrew Beck make his first catch of the season against the Cowboys. Buechele found him over the middle, and Beck went 39 yards for a touchdown.

Conversely, target numbers give the Texas defensive coaches some clues, too.

OU’s Dede Westbrook is one of the Big 12’s top receiving threats, and quarterback Baker Mayfield looks for him plenty. Westbrook has been targeted 34 times and has 24 catches for 312 yards and two touchdowns. Mark Andrews also leaps off the screen with four touchdowns on only 11 receptions.

What really stands out is how OU is using running back Joe Mixon out of the backfield. Mixon is far more than a safety valve; he’s got 12 receptions on 15 targets for 162 receiving yards.

Texas lost track of OSU’s Blake Jarwin, who hung out to Mason Rudolph’s right for safety protection. Rudolph dumped it off to a wide-open Jarwin four times for 50 yards.

What’s clear is that Gilbert’s offense gets everyone involved, something that should keep players engaged, even those who may get only one or two passes per game.

“That’s what happens when you have great athletes,” Buechele said. “You can just get the ball to everybody and see what they can do with it.”

Here's a look at how many times Texas and Oklahoma quarterbacks have targeted their teammates and how many catches each player has this season. Texas and OU have matching 2-2 overall records.