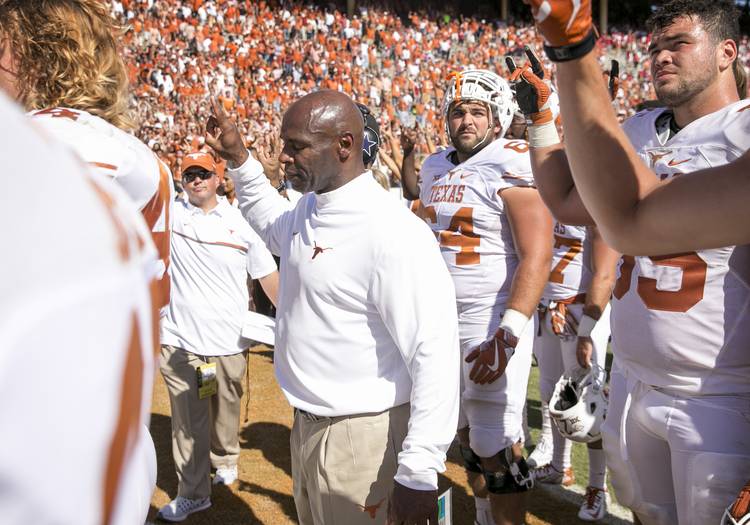 He didn’t come close to finding any answers. If anything, Bedford might have been exonerated because Texas played no better on Strong’s watch than it did on his predecessor’s.

Instead of Mr. Fix-it, Strong is in danger of becoming Mr. Exit if he cannot find some quick and lasting solutions after suffering yet another defensive collapse and falling 45-40 to 20th-ranked Oklahoma in a helter-skelter game that was there for the taking.

Instead, the teetering Longhorns (2-3, 0-2) took their third consecutive loss and put their beleaguered head coach in the crosshairs of an angry and impatient fan base that’s tired of watching the same struggles over and over.

The numbers are staggering.

The Longhorns backed up for 672 yards, the second-most ever allowed to OU. The Sooners’ offense kept the ball for a 6 1/2-minute drive and another for about eight minutes. They had just one three-and-out until its last clock-milking possession. Texas didn’t have a sack until OU’s final play of the game when Baker Mayfield tried a bootleg to run off time and was run down by Paul Boyette Jr.

As has been Texas’ custom, its secondary should be treated at a burn unit. Mayfield and Dede Westbrook scorched them at will as the OU wideout turned the Longhorns inside out with one home run ball after another. What’s worse is Texas has two defensive backs coaches since Bedford was demoted to specialize with the secondary along with Clay Jennings.

Westbrook was an equal-opportunist, roasting Davante Davis on a 71-yard bomb, sneaking behind Holton Hill for a score after a double move and doing the same to Kris Boyd, who stopped to look back toward scrimmage only to see the ball go over his head for a big gain to set up a score.

Finally, Westbrook torched Texas’ soft zone coverage, splitting defensive backs on a slant pattern that went for a 47-yard touchdown that put OU ahead for good. He finished with a school-record 232 yards and joined Mayfield and running back Samaje Perine as only the fifth team in FBS history to produce a 200-yard receiver, 200-yard rusher and 300-yard passer.

“Just busted coverages,” said safety Dylan Haines, who had two interceptions but missed a number of tackles in open space. “And 672 yards. You can’t win doing that.”

Some of the players, Malik Jefferson included, appear fed up.

“We haven’t fixed it — 672 yards. That’s not fixed,” the sophomore linebacker said.

Not even remotely. That yield was the fifth-most in school history as Texas’ fortunes dipped even further and put Strong’s job security in serious jeopardy. Strong more than a little understands it. He’s looking for improvement, not sympathy or Hallmark cards.

Asked how badly he needs to win, Strong shrugged and said, “Oh, I need ’em all.”

He just might. If not all seven remaining games, he might require six wins to survive, but you’ll find few who will bet on it. This was a respectable loss, but when is that the Texas standard? No Longhorns coach has ever been measured by that barometer, and Strong doesn’t want to, either. It looks even worse when new coaches like Jim Harbaugh and Chris Petersen and Tom Herman, to name a few, are excelling from the get-go at new jobs in Michigan, Washington and I think Houston. Why, Bob Stoops won a national championship in his second year at Norman.

Strong’s message clearly is not getting through to the players. He’s as beloved by the players as any head coach I’ve covered in four-plus decades and universally well-liked by the media and the administration, no matter how many national pundits think the Texas job is a “cesspool” and an undesirable post.

Tell that to the new Austinites flooding our city by the day and the 500 or so coaches who would salivate over this job. If what Kirk Herbstreit says is true, Austin may be the nicest cesspool in college sports, all things considered. Strong has received unconditional support from his administration, which should hardly be excoriated for “evaluating” a head coach who has a 13-17 record in his third year. Would Alabama or Ohio State be satisfied with 13-17?

Jefferson mentioned that some players “got their heads down and stopped playing. It’s something we can’t have. Sometimes they get too comfortable and expect someone else to make a play.”

Chagrined over yet another defeat, Charlie pulled no punches.

The hope for Charlie was to split the Oklahoma State and Oklahoma games and muster some momentum that could carry Texas to seven or eight wins and allow him to hang on for Year Four. Even that looks in doubt now with tough road games at Kansas State and Texas Tech and home dates with Baylor, West Virginia and TCU.

If somehow Strong could string together some victories and then hire A&M’s version of John Chavis to truly fix the defense, then maybe, just maybe, the Longhorns could press on with this regime.

For now, there’s just been too little progress and very little to hang your hat on. Especially the Golden Hat.