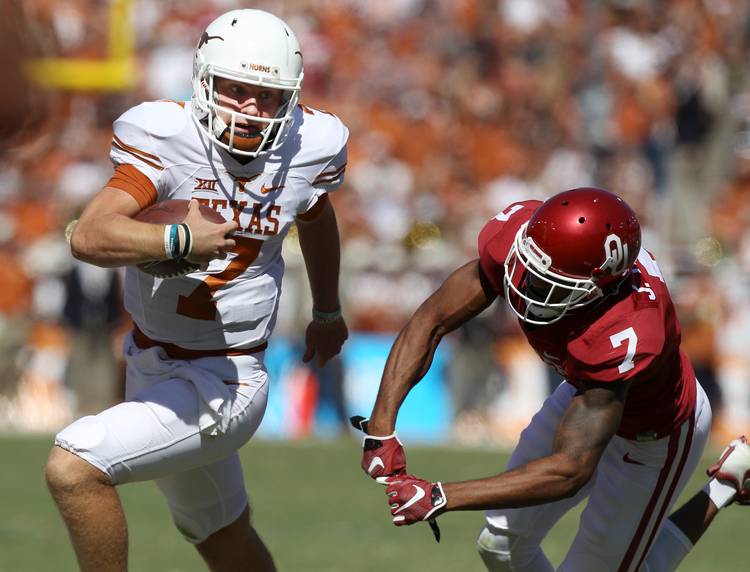 UT quarterback Shane Buechele beats OU cornerback Jordan Thomas to the edge in the first half at the Cotton Bowl in Dallas, Saturday, Oct. 8, 2016. (Stephen Spillman / for American-Statesman)

That’s usually the case when the Red River rivals knock heads every October.

While there’s a growing concern whether Charlie Strong is the right man to lead Texas back to national prominence, his freshman quarterback provided a bit or hope for sagging fortunes.

Shane Buechele was the second best quarterback on the field at the Cotton Bowl and there’s no shame there because Oklahoma’s Baker Mayfield played inspired football, particularly in the second half when the Sooners finally got some separation in a 45-40 win.

Buechele will go down as the losing quarterback in the record books, but nothing in the loss should deter fans from believing he can be a terrific college quarterback. The kid has the moxie needed to win this game one day soon.

His first Red River stat line — 19 of 36 for 245 yards, three touchdowns and an interception — should give the fanbase a bit of hope moving forward, even if most of the week’s conversations will be directed at Strong, who fell to four games below .500 in his first 30 games as Texas’ coach.

With that said, there were three passes Buechele surely would like to have back:

“I was seeing everything well, but I just wasn’t making throws,” Buechele said. “I have to execute and get better. I have to start making throws and be a better leader.”

He’ll get there. Experience will one day catch up to his talent level. And if he can stay healthy, the team is in good hands at the position.

As Buechele made the walk to the other end of the field to hear the “Eyes of Texas,” Mayfield was taking a victory lap with a giant OU flag as his running partner. It was a long time coming for Mayfield, the former Lake Travis star who finally broke through for a win against the Longhorns on his third try.

“It was very special to me,” Mayfield said. “I grew up in Austin and know what this rivalry is all about. I’ve been waiting a long time to get a win over these guys. It felt good to go out and celebrate with the team.”

As for Buechele, he will get other chances in a rivalry that’s always been cyclical. While Peter Gardere’s four wins over OU remains the gold standard, the youngster has plenty of time to make his name in this game.

Shoot, more experienced quarterbacks have walked into the Cotton Bowl full of confidence only to walk out on the short end. Chris Simms went 26-6 as a starter at Texas, but was 0-2 against the Sooners with seven interceptions in his two Red River starts. And Vince Young was blanked 12-0 in his first Texas-OU start before leading the Horns to 20 straight wins, including a pair of Rose Bowls and a national championship.

Buechele has the potential to thrive, especially if Strong figures out how to get more defensive stops. The one stat that offensive coordinator Sterlin Gilbert will have to figure out is how the Horns only came up with three points after the defense and special teams delivered a four-takeaway bonanza after registering a Power-5 worst one takeaway in their first four games.

There were times Buechele was victimized by drops, but he had to be happy to discover some new weapons in freshman wideouts Devin Duvernay and Collin Johnson.

“Early on he was just a little inconsistent, but came back in the second half and played really well and had some good things happen for him,” Gilbert said. “He thew the ball well, threw some deep balls well. It was good to have him come back and play the way he did in the second half.”

There will be brighter days ahead for Buechele, who pulled a Case McCoy with a couple of showtime deep throws to Duvernay and Dorian Leonard for scores, the latter putting the Horns up 27-21 in the third quarter. Buechele completed 10 of 15 passes for 166 yards and all three of his touchdowns in the second half.

Hopefully he will use this experience as fuel to lead a team that is sorely in need of a win with not-too-soft Iowa State coming to Austin on Saturday.

Buechele is already a good quarterback.  It’s too bad this 2-3 team needs him to be a great one right now.

Bohls: Charlie Strong is nowhere close to fixing this defense