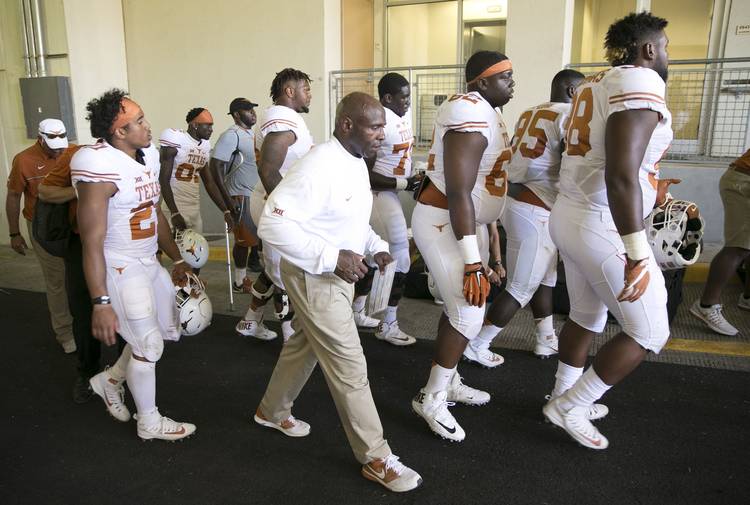 UT Head Coach Charlie Strong walks with his team back to the lockr room after losing to OU at the Cotton Bowl in Dallas Saturday October 8, 2016. JAY JANNER / AMERICAN-STATESMAN

CESSPOOL, USA — Hello, from the sewage capital of the world.

Judging from Kirk Herbstreit’s inflammatory comments over the weekend, when the ESPN analyst labeled the Texas football culture a “cesspool” and all but said Charlie Strong had little or no support and had been hired to fail, I know Mr. Herbstreit isn’t moving to our fair city any time soon.

I’m sure a 13-17 record in Columbus, Ohio would go over very smoothly at his alma mater, but Longhorn Nation kind of expects at least a .500 record from its head coaches and better than a 2-3 record almost at the halfway mark of his third season.

In some respects, the national broadcaster did Austin a favor. We’re privately hoping our mayor seizes the moment, and Steve Adler takes this new slogan and runs with it to thin out the traffic a bit.

But what really hit a nerve was Herbstreit’s contention that Strong has received very little backing from the administration. He cited Red McCombs as the smoking gun. And I assume the only gun. And that was three years ago. I don’t know where Herbstreit got his information to form his opinion, but it says here the exact opposite is true. He said Texas “was going to chase Charlie away” and it would chase away the next guy, too.

Texas has bent over backward to help Strong succeed.

Yeah, Texas is such a bad place to work that it pushed Mack Brown out after four very so-so years and still is paying him half-a-million dollars a year. For what duties? “None,” one Texas source said.

Texas chose not to respond to the latest chaos, but you’d think it would jump at the chance to refute Herbstreit’s stance since he appears on the most popular pre-game show on Saturday mornings.

Hey, I like and respect Herbstreit, too, but he is totally off base. He must be basing his opinion on the comments of one lone, loud donor, who questioned Strong’s capabilities and who was miffed, not so much that Strong was hired, but that his choice, Jon Gruden, was not. I’ve not heard of another Texas booster who’s gone off on Charlie.

When he was asked if he felt he’s been properly supported and has gotten a fair shake, his response was somewhat subdued, mostly because he’s solely focused on turning around his program.

“I don’t hear half the conversations (in public),” Strong said. “My whole focus is this football team. If we take care of business, everything else will take care of itself. You know what? We’ve got seven games left here right now, and we need to get that done. The support is there. We’ve just got to do our part.”

Texas has already done its.

Bohls: Charlie Strong is nowhere close to fixing this defense

Golden: If Texas loses, it’ll get much rockier than that 2015 flight home from Ames