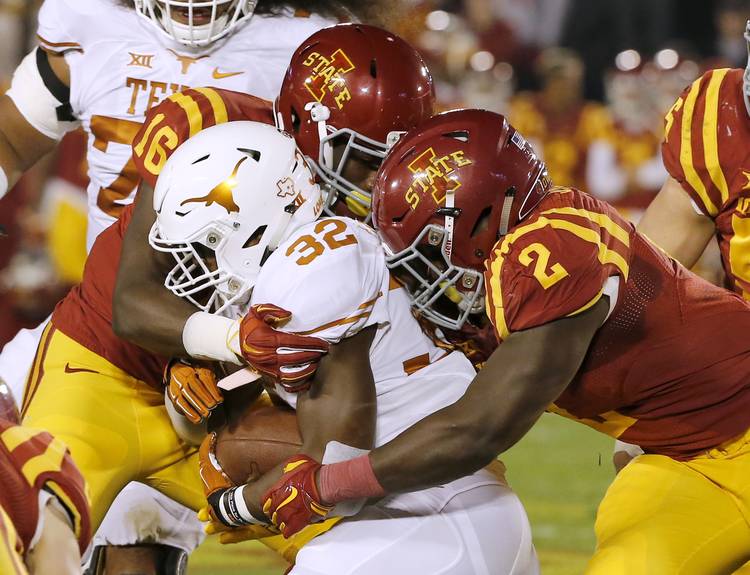 Iowa State linebackers Willie Harvey (16) and Jordan Harris (2) wrap up Texas running back Johnathan Gray Longhorns as he rushed for yards in the first half of play at Jack Trice Stadium on October 31, 2015 in Ames, Iowa. (Photo by David Purdy/Getty Images)

Shoot, if that happens, Strong Airlines will go the way of Braniff.

It’s well past  time for the Longhorns to take off and soar while avoiding the bumps that have accompanied this team in Charlie Strong’s third year. Last season was anything but smooth and this season has already had more than its share of bumps. In that season of bad losses, the one in Ames edged out the 50-7 Cowtown Beatdown at TCU as the most embarrassing of the seven setbacks.

The Horns rolled into Ames last year fresh off an upset of nationally ranked Oklahoma and follow-up win over Kansas State.  After allowing just 26 total points in those two games, Texas took the field at Jack Trice Stadium with thoughts of holiday frolic and bowl games dancing in their heads.

The Horns pulled a painful no-show  in a 24-0 loss to a 2-5 team that had given up 156 points in the three games leading up to Halloween night.  Iowa State wasn’t exactly the 2001 Miami Hurricanes, but played inspired defense while the Horns looked the part of a team that wasn’t going to any bowl game. The loss derailed any talk of a Texas resurgence. Even a big win over Kansas the following week impressed no one.

As if the shutout loss wasn’t enough, the Horns then experienced the flight from hell. Nothing that happened in Ames could compare to what went down thousands of feet above Middle America, especially when the jet dipped several thousand feet as pilots sought to find some smoother skies.

“When you fly, there is normal turbulence and everything else, but that was just on another level,” quarterback Tyrone Swoopes said. “Even people that had been flying most of their life kind of looked shook. It was scary. It was bad and we thought it was going to be worse.”

How did the night turn out?

“It ended up clearing up and being smooth the rest of the way,” Swoopes said.

If only it could work that easily on a football field.

After that game, the words “We’re Texas” were replaced in some circles by  “Were Texas.” Strong said he sensed something was off in pre-game that night. “We were out there and I think it may have been like a little dew on the grass or something and they’re like, ‘Oh, it’s slippery.’ OK, so we’re going to worry about the grass? You know, great, it’s slippery on both sides.”

History cannot repeat itself, not at 2-3 and 0-2 in conference play. We all know the Horns could actually lose to the Cyclones if they show up Saturday sleepy-eyed an uninspired.  Iowa State isn’t a world beater, but the Cyclones have held double-digit leads in the second half against Baylor and Oklahoma State in the last two weeks.

It’s a turbulent  season and smooth air has been hard to come by. While the offense has taken flight by scoring 40 or more points in four of the five games, the defense continues to plummet to depths unforeseen in school history — not counting last year, of course.

Charlie needs this win more than his players. His livelihood is being threatened mainly because Texas has become a woefully deficient defense which hasn’t shown itself capable of keeping opposing offenses out of the end zone.

Despite what you might be hearing out of Bristol, Kirk Herbstreit’s little cesspool of Texas football isn’t what Strong should be most worried about. It’s Iowa State. Another loss to the Cyclones could ground him for good.