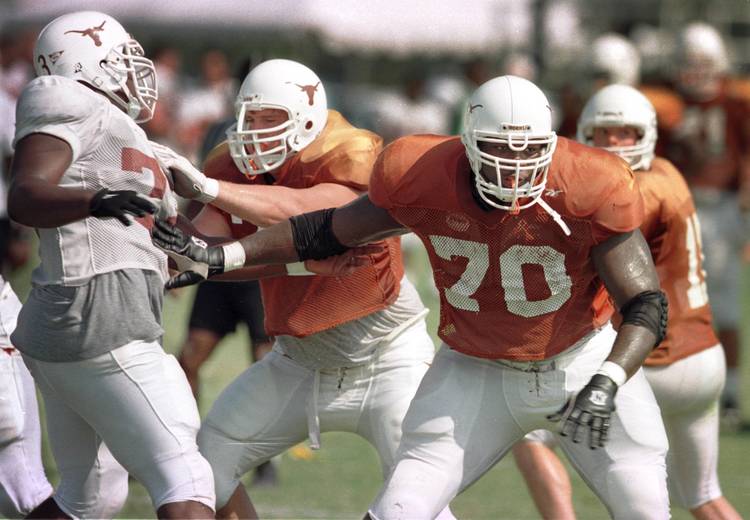 During his time at Texas, the 6-foot-6, 360-pound mountain of a man wore a 56 long jacket and once crowed about eating five breakfast sandwiches from Jack in the Box. That’d be 2,250 calories in one shot. Now, at age 38, that might kill him.

This weekend, the former All-American and All-Pro is one of 13 inductees for the UT Men’s and Women’s Hall of Honor.  Davis is going in with standout cornerback Aaron Ross (2003-06) and men’s basketball star LaMarcus Aldridge (2004-06). All will be honored at various events, including prior to Saturday’s game against Iowa State.

In 1997, Texas had stolen Davis away from Texas A&M late in the recruiting process, and it was widely thought this was a can’t-miss defensive tackle for the ages. Davis was a two-way player at Wortham, but growing up, “You never dream about being an offensive lineman.”

“I think after my third game, that’s when I really realized in my mind that this ain’t really going to work for me,” Davis said Thursday. “My thing, I was just thinking, ‘OK, I’ll finish the season and give it my all and not whine or anything like that.’ This is the decision that I made personally, and when it’s all over I’ll do something else.”

Prior to spring drills in 1998, Davis didn’t have to say much to Brown. It was as if the head coach could read minds. “He asked me, ‘Hey, what do you want to play — offense or defense?’ Just like that,” Davis said. “I said offense. He said, ‘I’ll let (assistant coach Mike) Tolleson know, and that was it.”

No fuss, no muss. By the 2000 season, Davis was an established left tackle, a consensus All-American and soon to be the second overall pick of the 2001 NFL draft.

Now, Davis is back in Austin this weekend for something he never expected. Would Big Leonard even be here if not for that position change? Probably not, according to him.

Defensive players need a certain twitch to get out of their stance after the snap, something Davis believes he didn’t have. But he was so big, “they couldn’t block me or move me out of there,” he said.

Initially, he played right tackle but struggled with his mechanics. One random practice, as Davis recalled, offensive line coach Tim Nunez said he wanted to see Davis at left tackle.

“Once I went over there, it felt like I’d been playing over there my whole life,” Davis said.

Davis’ right leg was stronger than his left, and all those days of throwing the shot in high school finally paid off.

Jamaal Charles was UT’s last 1,000-yard rusher in 2007. The Longhorns haven’t had an offensive lineman drafted since Tony Hills went in the fourth round in 2008. Coincidence? D’Onta Foreman is on pace for a 1,000-yard season. He currently ranks second nationally in rushing yards per game (148.8).

Current left tackle Connor Williams has a chance to play on Sundays, as does guard Patrick Vahe. The key to a long NFL career, Davis said, is having the right mindset. Those type of players with the right attitude can play for a decade or more, like he did. In case you haven’t noticed, NFL owners fall all over themselves giving talented left tackles lots of money.

“They go out with a mindset like, ‘Hey, I don’t care if I’ve got 20-inch arms, I’m still going to block this all-pro, all-world lineman,’” Davis said.

During his NFL days, Davis said it was hard to keep up with the Longhorns. Things change in retirement, if that’s indeed what 38-year-olds call it.

Davis and his wife, Amanda, and their two girls live in Phoenix. What’s funny is that a friend actually invited the family to come visit Austin during Iowa State weekend. Then a week or so later, Davis got the call about the Hall of Honor, the highest individual award given by the UT athletic department.

“For me, it does mean a lot just because it was kind of those deals where your name is being mentioned with some of the elite athletes that have been here and made an impact,” Davis said. “For me to be selected, my name among those, it’s an honor for me to be in that position.”

Michelle Carter (track and field, 2004-07): Three-time Olympian and 2016 gold medalist at the Rio Olympics in the shot put.

Golden: If Texas loses, it’ll get much rockier than that 2015 flight home from Ames

Golden: Horns had better wake up in the second half or else