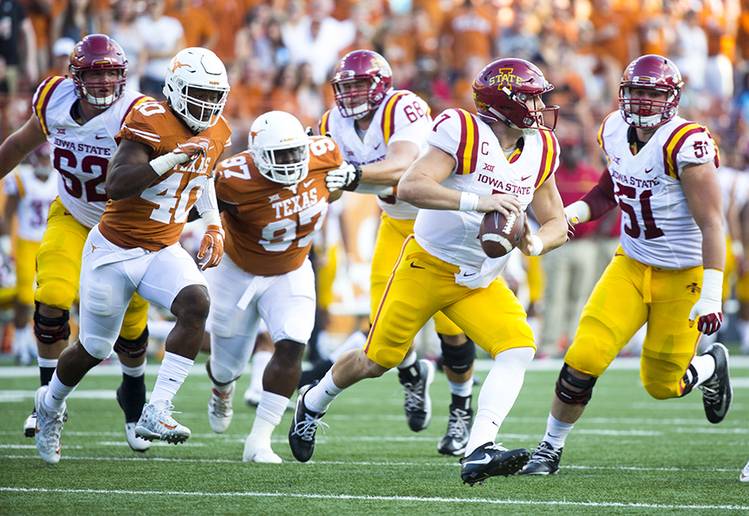 Upcoming: the most important half of football of Charlie Strong’s Texas tenure.

The Horns had better wake up or else the 2016 season will take an irreversible turn.

That can’t be a good thing, friends. Texas was supposed to work the Cyclones by double digits.

There’s something about Iowa State that brings out the absolute worst in the Texas offense of late. Thankfully for the Horns, the defense has shown up tonight. Naashon Hughes and Chris Nelson are playing well for a group that has four sacks.

Texas trails by just three so it’s not insurmountable. The ugly part: the Horns  have now scored a grand total of three points in the last six quarters against a team that is 4-14 over the last season-plus.   The first half was eerily similar to last season’s shutout loss in Ames: a sputtering offense, drive-killing penalties, and nothing on the scoreboard from the guys in burnt orange.

This is no time for the Horns to panic but it’s also no time to be giving away games they should win given the warmth of Charlie Strong’s seat.

This team just isn’t good enough to expect to show up and win.

D’Onta Foreman’s second lost fumble in as many weeks preceded a personal foul on tight end Caleb Bluiett and the result was a early six-point deficit.
Texas looks very sleepy on offense on a night the defense its best to bend and not break.

Speaking of defense, linebacker Malik Jefferson was not in the game on Iowa State’s second scoring drive, which began deep in Texas territory after Foreman’s fumble. Interesting, considering the Horns were already backed up on their own doorstep. To their credit, the Horns kept the Cyclones out of the end zone.

Of note on offense: sophomore speedster John Burt did not play in the first half from my count.  Dorian Leonard has become the go-to guy at the receiver position. His 22-yard catch would have put the Horns in position to get points midway through the second quarter but the play was nullified by an ineligible player downfield.

Numbers to chew on: Texas is 1-13 under Charlie when allowing the opponent to score first and 0-14 when trailing at the half.

Time to wake up, Horns.