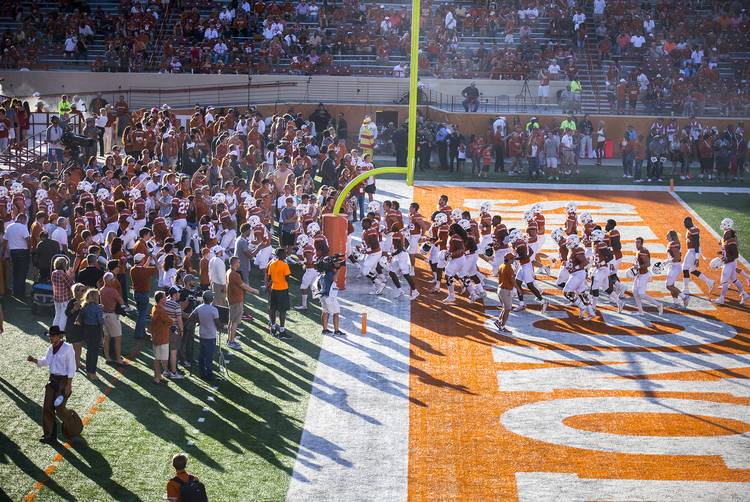 It had been a minute since I’d sat in the stands at Royal-Memorial Stadium for a Texas football game as this typist did on Saturday night.

I’ve practically grown up in that stadium, ushering patrons to their seats as a Boy Scout for first quarters, then scattering to find any vacant seat. I never missed a home game during my college years. I even took a homemade No. 1 burnt-orange cardboard sign to the Big Shootout II when Texas stomped Arkansas in 1970.

A couple of things have changed from the days I sat on the east side as a Texas student that year, when my brother Randy and I sat in the flash-card section and stomped on the new aluminum seats as we watched Cotton Speyrer’s miracle catch in the final seconds to hold off UCLA and preserve a win streak that grew that afternoon to 23 in a row.

For one thing, Texas entered Saturday’s game with Iowa State with a three-game losing streak, not a winning tear that would produce back-to-back national championships. Charlie Strong about now would settle for back-to-back victories.

As I settled into my seat in Section 4 down low, I didn’t remember fans taking videos of the action with their cell phones back when I was a journalism major in the ’70s. And no, that wasn’t the 1870s. You mentioned cell back then, and I would’ve figured you were pre-med.

Seems three out of every four coeds wear boots these days, and I’m glad the fashion trend caught on. There’s still a sea of burnt orange. Youngsters wave themselves with Come Early, Be Loud paper fans. Catchy phrase. And while it was a pretty muggy night, the cool, southerly breezes helped.

The $8 beer was cold. Or so I was told. Does anyone smuggle in flasks anymore? Heard that was quite common back in the ’70s.

Everything else was the same in the stands. Fans want to win. Badly. And while they appear to be taking a wait-and-see approach to Strong’s future, most seem to support his keeping an Austin address. But that doesn’t mean they were happy, especially when their favorite team trailed 6-3 at the half.

“There’s no creativity in the running game,” said one of them, John from Westlake. “None. It’s 6-3 to Iowa State at home. I don’t need WikiLeaks to tell me what’s going on.”

Penalties, two of them offensive pass interference, killed one promising Texas drive after another. The Texas Fight chant broke out late in the first quarter. Iowa State was in control.

“Our kicker’s been great,” said another fan — Alex, who lives downtown and like to look on the bright side. “Our special teams are good.”

At the end of the first quarter, members of the national champion Texas swimming team took the field and accept congratulations from the crowd of 96,851.

Naashon Hughes sacked the Iowa State quarterback for a loss of 12 yards. The defense was settling in, vastly improved over its recent showings. A fan walked by, wearing a “Fear the Steer” T-shirt. That’s been a while ago.

Texas had worked like crazy to get in position to kick a field goal to get on the scoreboard in the first half. Armanti Foreman got nowhere close to the ball on a fade route in the end zone from the 3.

One fan was not happy.

“I don’t want to get Charlie in trouble, but we need to make a touchdown when we get the ball on the 3-yard line,” Jackie from Houston boils over. “I mean, it’s the great University of Texas, right?”

The Longhorns may not have changed the world Saturday night. Or the Big 12 standings. But they changed their own fortunes with a 21-point third quarter. Before that, diehards were commiserating by the concession stands.

“I am shocked by the offensive performance,” said a disgusted Paul, who lives in Houston. “Horrible play-calling. It’s really aggravating.”

Another fan, Frank, has been sitting in the same seat for more than 30 years, and he was equally distraught at halftime. He’s from Houston, too. Is every Longhorn fan from Houston?

“I didn’t think I’d ever see the day,” Frank said. “It’s absolutely uninspiring and an embarrassing effort. I thought they loved their coach.”

Roy, born and raised in Austin, wasn’t any more pleased. He questioned the offensive play-calling as well.

His new bride, Sherry, wasn’t any happier: “I think they forgot about the Notre Dame game and what they’re capable of.”

The Longhorns rediscovered that potential in the third period. Shane Buechele looked crisp and on target with the deep ball, connecting with Jerrod Heard on a 37-yard touchdown. The defense, playing inspired football, rallied to stuff the Cyclones on a fourth-and-1, only to have defensive end Breckyn Hager get flagged for the most petty unsportsmanlike call in college football history. He’d simply waved his hands, mimicking a safe call. Fifteen yards.

“Bull-spit, Bull-spit,” the crowd thundered — or words to that effect. And I had to agree with them.

Two plays later, Buechele found Duvernay deep for a 75-yard strike. Bet that isn’t the last time we hear that connection. Texas went up 17-6 and was in control.

“Never a doubt,” John of Westlake said, changing his tune. He’s coming around.

Another Frank liked what he sees, but he remained nervous.

Of course, his name adorns the practice field.

“We need another touchdown,” an optimistic Frank Denius said from his 50-yard line seat. “I think the defense is looking better. I think Charlie will get it done.”

D’Onta Foreman, who may be a better Cedric Benson, rumbled for another Longhorns score, and Denius’ prayers were answered.

The fourth quarter started, and the crowd went crazy as usual at the “We’re Texas” video on the Godzillatron. Trent Domingue kicked a short field goal, and the defense continued to pitch its second-half shutout.

Al, a human resources consultant from Austin, watched from the end zone section with his wife, whose nephew, D.J. Reader, played nose tackle for Clemson last year and is now with the Houston Texans. They’re Clemson fans, but support Strong.

“It’s good to see the fast start in the second half,” Al said. “I’d like to see him win out. I’ll go out on a limb and say he’ll run the table  and survive another year.”

So is John of Westlake, after watching Texas drub Iowa State 27-6. After consecutive losses to Cal, Oklahoma State and Oklahoma, the Longhorns got on track and evened their record at 3-3.

You know, it’s pretty cool to sit in the stands. Think I’ll be back. So will John of Westlake.

“Bring on Alabama,” he crowed.