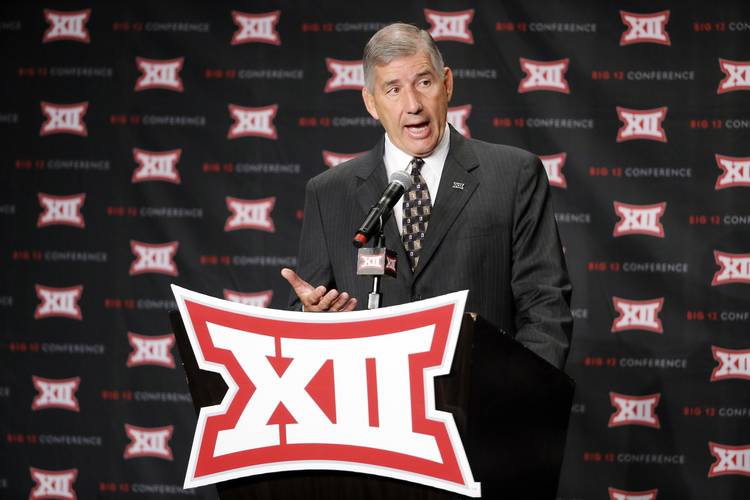 Expansion for the Big 12 is dead.

Or so it seems.

Some might say the same for the Big 12; that its demise will be linked to its instability and indecision and lack of out-of-the-box thinking. All of that will come to a head Monday when the Big 12’s presidents and chancellors deliberate and probably announce they’re standing pat.

“I’m not expecting expansion,” said one school administrator with a vested interest in the process. “I don’t see that it’s going to happen. I think on Monday everybody’s feeling it’s all coming to a screeching halt.”

If that’s true, and it probably is, the Big 12 becomes the Little 12 once more. Or Little 10. It will probably gain more money from television partners ESPN and Fox for not expanding. At least, that’s how they would sell it. But it has tooled around at least 20 schools that wanted admission and cost them upwards of $100,000 in materials, manpower and resources each to go through this unwieldy process.

And the Big 12 once again gave itself a black eye. How many is that now?

One point of view is the Big 12 doesn’t need to grow. Its 10-school makeup is perfect because it allows for round-robin play or double round-robin play in basketball, allows for bigger slices of the financial pie, provides middle-of-the-country time-zone play (with all due respect, West Virginia) and features very direct (and easier) paths to the Final Four in football and basketball because of lesser competition. All of that is probably true.

Then, there’s the other point of view.

The Big 12 makes the Kardashians look mature. It can’t get out of its own way. It can’t decide if it wants to expand or not. It will be swallowed up by the Big Ten and SEC.

The pool of viable candidates is desperate to get in a Power 5 conference. The money’s too great. Most of the candidates make about $3 million a year off television. Big 12 schools each cashed checks of more than $30 million in June. One source at a Big 12 school told me Friday that an expansion candidate offered to pay the Big 12 a whopping $50 million for an invitation. That’s big-time.

But I think doing nothing is the wrong choice. One Big 12 power broker called the whole operation “a clown show.” Just without the oversized shoes and red nose.

The Big 12 should expand because any and all decisions should be based on one primary criterion: survival.

We all know Texas and Oklahoma will not only survive, but thrive. We know that because they are the kingpins of the Big 12. They are the brand names. Probably the only brand names, which again speaks to the need for growth.

Many of us think Texas and OU will ultimately leave in eight years after the grant of rights expires. Probably for the Big Ten, the SEC or the ACC.

That’s not a healthy environment for what I will call the other eight schools — the Hateful Eight, if you will. Oh, they may not hate it now. Many of their predecessors did, which is why Texas A&M, Nebraska, Missouri and Colorado call other conferences home. They left because they had options.

The Hateful Eight has only one option. Two, if you count prayer.

The one is expansion. They need to grow to look out for their own welfare and best interests because they’re fools if they think the Longhorns and Sooners are going to.

And the Kansases and Baylors and Texas Techs have leverage. For maybe the only time in the history of the league.

It takes eight votes to expand, and they hold eight votes. That, my friends, is real clout.

They should scoop up Houston and Cincinnati, maybe even BYU and South Florida or Central Florida or any school near the state of Florida. May not have sizzle but four new teams would help bolster their chances of survival. If Texas and OU bolt for greener pastures — that’s greener as in Benjamins — the Hateful Eight stand a better chance if they still have as many as 12 teams to market. Otherwise, they’ll be in the next reincarnation of the American Athletic Conference.

Watch Texas and OU leave, and then try to sell an 8-team league made up of Iowa State and Kansas State and Oklahoma State and the rest to ESPN or Fox or Amazon or Netflix or Apple or whoever is showing games in eight years. That gets to be a little dicey.

There’s been precious little public discourse on the matter. None of the presidents I reached out to this week chose to respond because it’s such a sensitive matter. Can’t say I blame them because this decision affects a whole lot of people.

“The president won’t have any comment,” another at a Big 12 school said.

None really has outside of OU’s David Boren. But come Monday night, a lot of people may have a lot to say. By then, it may be too late for the Hateful Eight.

Bohls: This Texas win looked good — from the stands or anywhere else

Bohls: If the Big 12 had no dysfunction, it wouldn’t function at all