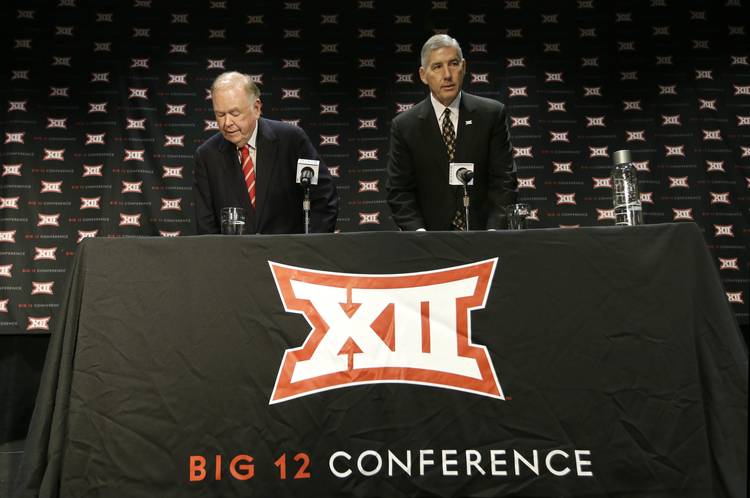 Sorry about all that fuss, Houston. Our bad, Cincinnati. Uh, next time, BYU.

And if I’m one of the 11 remaining viable candidates for Big 12 expansion who turned out to be not all that viable, my message to the Big 12 would be this: “Don’t call us, we’ll call you.” Or maybe they don’t ever call the Big 12 again.

The Big 12 presidents and chancellors, who met here at the DFW Airport for a three-hour working dinner Sunday night and again for almost six hours on Monday before deciding not to expand at all, owe those schools who applied a huge apology.

Even though Big 12 board of directors chairman David Boren said it “wasn’t wasted time,” I’d disagree. The interested parties wasted tons of money — in one case, up to $100,000 — manpower, time and energy putting together voluminous presentations to make their pitch, only to be told thanks, but no thanks. Guess they got some good exposure out of the deal, but that’s a sad parting gift.

Commissioner Bob Bowlsby said he had 11 “very good conversations” with the 11 jilted candidates. “They weren’t happy, but who wouldn’t be?” he said.

Depends on whom you ask.

So once again the conference said it’s good. Never been more unified. Never been more committed to the future. You kept looking in the back of the room for some marshmallows and a campfire. Why, Boren even referenced the grant of rights that ties the Big 12 schools together and said, “No one’s looking to walk away from this conference.”

But he did say why address the grant of rights now when they don’t expire for another eight years. Oh, I don’t know. Peace of mind for the rest of the league, maybe? But he said the marketplace is changing too rapidly to make that kind of commitment. But, uh, the conference is committed, remember.

Boren and Bowlsby even said there wasn’t a vote, wasn’t even hearty discussion of the individual schools. Come again? It’s like a friend of mine who said you hold a beauty pageant only to decide not to award a winner. Well, the Big 12 won’t be winning the Miss Congeniality award anytime soon. Sounded very patronizing.

Is this any way to run a conference? If you’re new here, this is one of the many reasons that the Texas A&Ms and Nebraskas jumped ship. Never mind that the consultants told the Big 12 that it could better its chances of reaching the College Football Playoff by as much as 15 percent if it enlarged the league membership as well as add a championship game, which it will do next season.

Know this: The Big 12 was wrong in not adding any schools.

It was bad form for the league and bad business because no Power 5 conference is viewed as being weaker. It undoubtedly will grab more cash from television partners ESPN and Fox, delighted not to be owing the Big 12 an additional $25 million per school, but Bowlsby would only say the league will get more money for the title game and “other components.”

The Big 12, it seems, is on life support. Or will be soon enough because all the Power 5 schools are taken and there just aren’t enough Big 12 teams that consistently compete for national titles, which hurts TV numbers, ticket sales and attendance figures. Bowlsby wouldn’t answer when I asked if any Power 5 schools had expressed interest in joining the Big 12.

Even the music piped into the Big 12 media work room was not without subtlety. Just before the late afternoon presser, we were treated to Al Green’s “Let’s Stay Together.” Apparently, they mean it, at least with lip service.

Oddly enough, the Big 12 leaders convened in the North America Room on the LL floor of the DFW Hyatt. Pretty expansive name for the meeting place for a league that doesn’t want to grow. Does anyone in the conference really think Texas and Oklahoma will remain in the Big 12 beyond the 2024-25 school year when the grant of rights expires? My bet is they’re both in the Big Ten or SEC by then. If not sooner.

Maybe the league presidents didn’t notice, but their football programs aren’t exactly knocking down Alabama’s door to get a playoff spot. Unless Baylor or West Virginia runs the table, the Big 12 is almost a lock not to make the playoffs for the second time in three years. It’s a flawed league that needed strengthening. Expansion would have helped. BYU’s THE brand name of all the candidates. Houston’s coming on. Cincinnati, Central Florida and South Florida would have expanded the footprint.

And you thought the Big 12 was psychologically disadvantaged before. Boren backtracked a little in the changing climate, joking that “some have suggested I’ve had a brain transplant, but that is not true.”

We presume this decision by the Big 12 not to grow is final. Well, at least for a month or two. Boren said, “We never say never. It’s just off the agenda at this time.”

It’s safe to assume the Big 12 will sink even further behind the Big Ten and the SEC in terms of finances, success and prestige. Everyone knows that none of the candidates — save maybe BYU — truly moved the needle. None brought so much sizzle that it was readily apparent the Big 12 had to expand. BYU had the biggest brand of them all, but just too many other obstacles, including distance, Honor Code and no-play Sundays.

In the end, no one blew the Big 12 away. Of course, the conference might do that on its own.

Eyes on Texas: Want to live dangerously? Try playing corner in the Big 12