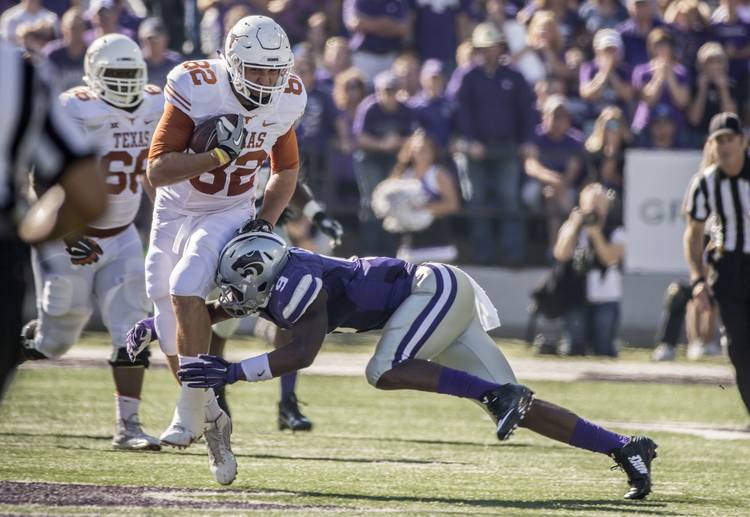 Bill Snyder Family Football Stadium has the welcoming feel of a firing squad when it comes to the Texas Longhorns.

Kansas State always has seemed to have the answers against Texas at home, even when Texas held a sizable advantage in talent and playmaking. The Horns have played in Manhattan four times since last winning in 2002 and have won none of those games, and if history means anything, the enigmatic 2016 team will have a real tough time handing the Wildcats a loss in Saturday’s matinee.

It’s been a consistent trend: Death, taxes, and Texas losing at K-State.

It’s time to change that narrative.

The oddsmakers are predicting a Kansas State win by a hair, but the Horns should be emboldened, especially the defense, which should be able to keep the Wildcats skill people in front of them for most of the afternoon. They should also go in with a let-it-all-hang-out mentality knowing full well that better Texas teams than the 2016 version have left Manhattan with an L on the ledger.

Take the 2006 team, for instance. The defending national champions (sans Vince Young) rolled into Manhattan with a 9-1 record, a 6-0 conference mark and a No.4 national ranking against a Wildcats team coming off consecutive losing seasons.

The 45-42 loss was a crusher. Texas’ national title hopes went up in flames after quarterback Colt McCoy was knocked out of the game in the first quarter on a goal-line carry. Texas’ 22-game conference winning streak, which included the 70-3 demolition of Colorado for the 2005 Big 12 title, came to a sudden end.

One of the best attacks in college football went from a well-oiled machine to a turnover machine with a pair of lost fumbles and a blocked punt. Aaron Ross, the eventual Thorpe Award winner, played the worst game of his career and a little-known K-State wideout by the name of Jordy Nelson threw a 28-yard pass on a trick play.

The postgame celebration was a mob scene with most of crowd of nearly 48,000 leaping from the stands to flood onto the field.

And in an ironic twist, program architect Bill Snyder wasn’t even the head coach then.

It was a nice snapshot of what good Texas teams have faced in that stadium over the years.

Mack remains the only Texas football coach to win a game in Manhattan, but that should change Saturday. The current Texas crew isn’t about be confused with a world beater, but it has the ingredients necessary to pull off a second straight win even with this growing list of road flops. It won’t be easy, but rarely have the Longhorns had it easy under Strong.

They mustered up only 196 yards and zero points they last time they walked that stadium. The 23-0 loss in 2014 wasn’t as embarrassing as the Iowa State road no-show that came a year later, but Strong should probably think about getting off to a good start, unlike the teams in those games that didn’t start at all.

“You’ve just got to go in there and you’ve got to go play, and that’s what we haven’t done,” he said.

It’s an especially tough environment for a team that hasn’t shown much toughness in true road games.

It’s well past time to win in Manhattan.

Editor’s note: The original version of this story was edited to reflect the amount of games and won-loss record the Longhorns have in Manhattan since 2002.

Eyes on Texas: Want to live dangerously? Try playing corner in the Big 12

Bohls: Texas is not sound, but was beaten soundly