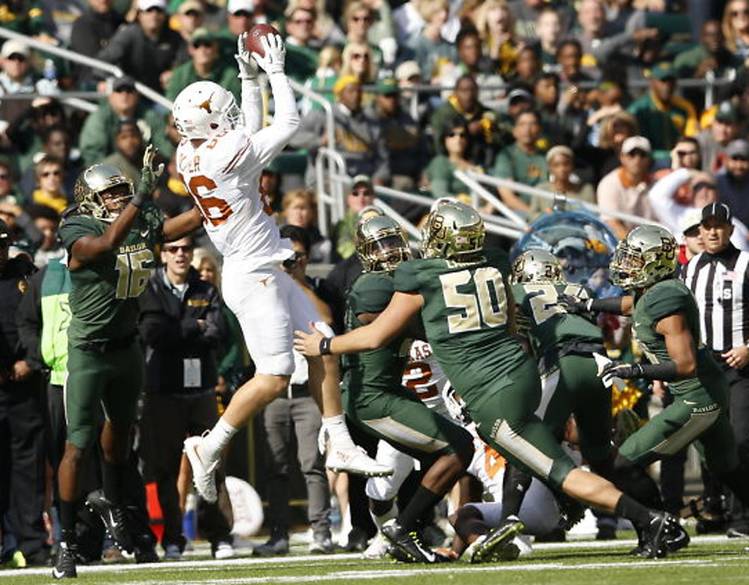 Texas doesn’t really see eye to eye with Baylor on a number of things. That includes morality code and recruiting and Art Briles, to name a few.

That difference of opinion was best espoused not all that long ago by former Longhorns trash-collector Steve Edmond, if you will. Edmond debunked much of Baylor’s success, which any unbiased person would say has been considerable.

A team doesn’t go 6-0 four years in a row — the only FBS team to do so — without being really talented, I don’t care if you’re playing a schedule that would embarrass fellow unbeaten Cedar Ridge. Outside the league, the Bears don’t play anybody, but they sure have beaten all the nobodies they play.

But to the Longhorns, their comments on Monday leading up to Saturday’s game at Royal-Memorial Stadium left one distinct impression about the Texas-Baylor series. To paraphrase, it’s like this:

Uh, the Longhorns-Bears rivalry, the second biggest for Texas since you-know-who left.

Oh, that rivalry. Currently, it’s a rivalry right behind Texas-Oklahoma, which of course is indisputable.

This rivalry arrived at this point for the following reasons. Baylor’s been the better program for the last six seasons, beating Texas four of those years. Texas is jealous of what Baylor has accomplished on the field. A lot of Big 12 teams are. Texas and the world have been rightfully disgusted over the sexual assault scandal that swept out Baylor’s president, head coach and athletic director. Texas either stole or legitimately signed four Baylor recruits in June, including the Longhorns’ best receiver Devin Duvernay, who occasionally catches a long pass. And they’re separated by 100 miles and tons and tons of tradition of winning football.

Otherwise, these teams don’t care about each other at all.

Texas defensive lineman Paul Boyette playfully said, “Technically, from the standpoint of what H-E-B says. They said it was the I-35 Showdown, so technically I guess they must be a rival.”

Well, if H-E-B says so. … It hasn’t always been a great rivalry. We all know that because the Longhorns have owned the Bears (75-26-4) and regularly dismissed the Bears, except for a few momentous meetings when Grant Teaff roamed the sidelines in Waco and once Art Briles arrived on campus there.

And while the Longhorns gave the Bears ample credit on Monday, they still seem to hold them in low regard. In no way are the Texas players intimidated, even though defensive lineman Paul Boyette said, “They’re not ranked sixth in the nation (eighth in AP Poll) for no reason.”

However, when wide receiver Jacorey Warrick was asked if Texas is playing catch-up to unbeaten Baylor, he laughed and said, “No.” He added that the Bears “have had a lot of recent success as far as recruiting and stuff like that. Recently, in years, Baylor has been up there because of the things they’ve been doing. They’ve been having success. But just as far as us trying to catch up to them, no, I don’t.”

When I asked if he considered Texas an underdog for Saturday, Warrick said, “We go into the games thinking we’re going to dominate.”

Five minutes later, Warrick was marched back into the reporter scrum at the instruction of the sports information staff and amended his statement to say, “What I said about dominating, that’s just our mindset in general.”

Several of the players were highly complimentary of the Bears, who have the seventh-longest FBS winning streak at seven games and are one of just nine unbeatens nationally.

“Baylor’s a really good program,” wide receiver Dorian Leonard said. “I love how their team is full of athletes. They’re a good team just like we are.”

Yeah, lesser athletes. Isn’t that how Charlie Strong put it a few weeks ago when he spoke of how Baylor and TCU emerged on the scene with “lesser athletes” and have gotten stronger?

Personally, I think the Texas head coach misspoke. I think he meant to say “fewer athletes” because in this up-tempo, spread age where quarterbacks can throw 88 passes in a single game, perennial second-tier programs can improve instantly with passers and catchers and don’t need countless physical specimens like an Alabama.

Now Baylor’s no Alabama. And Texas is no Baylor.

But the rivalry? That’s alive and well, wherever Steve Edmond is.

Baylor trails the overall series with Texas 75-26-4, but the Bears have taken four out of the last six matchups. Here’s a look at the last five:

Bohls: Texas is not sound, but was beaten soundly