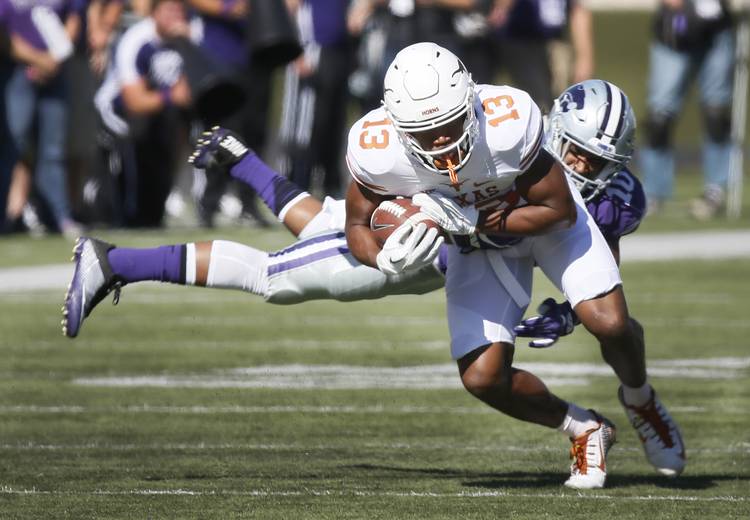 Texas #13 Jerrod Heard is brought down by #10 Donnie Starks during the fourth quarter of the Longhorn’s games against Kansas State in Manhattan, KS Saturday October 22, 2016 at Bill Snyder Family Stadium, Manhattan, Kansas. RICARDO B. BRAZZIELL/AMERICAN-STATESMAN.

Texas approaches this week’s Baylor game with a laundry list of problems to fix, chief among them Charlie Strong’s secondary and receiving corps. Frat boys don’t have this much dirty laundry.

Depth at those positions isn’t the issue.

In fact, it’s entirely possible that Strong has too much depth there.

The multitude of Texas defensive backs can’t keep receivers in front of them. Just ask Dede Westbrook or Chad Hansen or James Washington. Those three opposing receivers alone from Oklahoma, Cal and Oklahoma State accounted for 27 catches for 519 yards and six touchdowns. And that doesn’t even count Washington’s sidekick in Stillwater, Jalen McCleskey, who had 109 yards and a pair of scores.

Those four rank fourth, eighth, 13th and 52nd in the nation in yards per game. Texas has no one in the top 100. Wouldn’t playing Dorian Leonard and Devin Duvernay more often make sense? Aren’t they the two best?

Texas’ receivers have dropped far too many balls, especially John Burt. Two of them came last Saturday in Manhattan, Kan., when Dorian Leonard and Armanti Foreman couldn’t hang onto perfect passes from Shane Buechele that would have been touchdowns. Texas lost by three.

I’m on record as saying this is the best collection of wide receivers in school history. Maybe Texas has too many.

I wrote during preseason that the secondary could well be a strength of this team because of emerging cornerbacks, the top safety recruit in the state and a bunch of young, athletic defensive backs. Maybe too many.

None has starred. Not a one. There’s no consistency.

Among the Big 12’s top 10 wideouts in receptions or yardage, you won’t find a single Longhorn. Texas has had one 100-yard receiver all year — John Burt in the season opener.

Check out the league’s top 20 in passes defended, and there’s nary a Longhorn. No Texas defensive back will make All-Big 12, even with two coaches now assigned to the secondary.

The wide receivers and defensive backs have not blossomed into some of the Big 12’s finest. Those two negatives are a big reason for a highly disappointing 3-4 record because Texas has done just fine at running back, quarterback, offensive line and defensive line, although linebackers and special teams play have been spotty at best.

Strong gave a little hint into his strategy on Monday, saying that’s part of his recruiting pitch. Come to Texas and you get immediate playing time. But does offering the chance of one or two catches a game to a dozen receivers have any appeal for a receiving prospect interested in making an impact and a name for himself? I doubt it.

Most conspicuous by their absence have been budding cornerback stars Holton Hill and Davante Davis, a pair that combined for 13 starts last season. They started two and three games this year, but now can barely get on the field and rumors swirl about the reasons for Hill’s skimpy playing time.

On Monday, when Strong was asked about their whereabouts, he talked about work ethic in practice and intimated they weren’t practicing well enough to earn more playing time.

But he added, “I don’t know if they’ve so much regressed. We’re alternating a lot of guys. (Kris) Boyd and (John) Bonney, both of those guys are playing well, and Sheroid (Evans) played a lot. The rotation is still there. They’re just not getting the snaps.”

I love Boyd’s upside, but haven’t been impressed with Bonney or Evans, who seems to have vanished since getting torched by Hansen in the Cal loss. Frankly, it was amazing that Bonney even played in Saturday’s second half, given his first-half troubles.

Strong hasn’t thrown in the towel on Hill and Davis, saying, “Those two guys are going to get their chances and get their opportunities. They’re going to play some.”

While the defensive backfield has been tormented all season, the receivers have run hot and cold. Burt, the expected deep threat, had a big drop against Notre Dame but rebounded to have a terrific game with six catches for 111 yards and two touchdowns. Since that night, however, he’s been invisible, totaling just 10 catches for 86 yards over the last six games.

Not that anyone else has hogged the spotlight. There is no featured receiver. Strong changes his wide receivers like most men do socks. And perhaps Buechele never gets in sync, never finds a rhythm.

Strong disagrees, saying, “He spreads the ball around. That’s how we’ve been able to sell it and recruit, (saying) ‘You’re going to get your touches.’ That’s what they want to hear. And DBs can’t just lock down on a guy.”

Why do they need to?

Meanwhile, we’re waiting for the next DBU graduate and the next Roy Williams.

Bohls: Is Texas-Baylor a rivalry? H-E-B and hot rhetoric both say yes