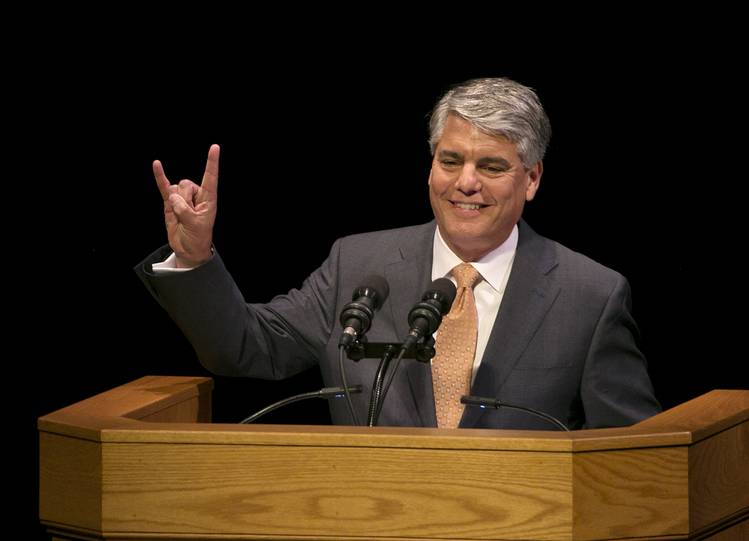 The Big 12 Conference still has some important issues to hash out in the coming weeks.

The league is close to finalizing a five-year deal with a host site for its new championship game. That doesn’t seem too difficult. Anchor the event at the Cowboys’ AT&T Stadium and be done with it.

The Big 12 must figure out how to determine the championship game participants. If the conference goes to a two-division format, as has been discussed, who will be in each division?

That seems easy, too. Put the old Big Eight schools together with the four Texas schools plus West Virginia. That way, you have a theoretical chance of getting one Texas-Oklahoma game in October and another in December.

Despite all the teeth-gnashing, bloviating and screaming about expansion, the league stood pat with its current 10-team configuration. Thumbing their nose at Houston, Cincinnati, BYU and others may have ultimately been the right call, but that didn’t solve the league’s overarching problem: Long-term stability.

On Tuesday, at men’s basketball media day in Kansas City, league commissioner Bob Bowlsby joked that “10 years from now, I’ll be fishing some place.” That’s two years beyond the league’s current TV contracts and two years past the current grant-of-rights agreement among the schools.

Currently, no television network has stepped forward to offer a new or improved TV deal. With eight years left, why should they? Well, here’s a thought: If nobody wants to start a new Big 12-branded TV network, as OU President David Boren said, and if nobody wants to extend their current deals, what’s really going to change in eight years?

Asked if it bothers him there’s a perception that the Big 12 could be gone in eight years, Bowlsby pushed back. “The grant of rights doesn’t have anything to do with it. Zero,” the commissioner said.

Bowlsby argues — correctly, I should add — that a grant of rights is merely a negotiating tool, nothing more. Each school “grants” the league the “right” to negotiate on each institution’s behalf for a collective, common good.

All that said, the grant-of-rights issue is a theological sore subject for the folks in Austin and Norman. The fact that Texas and OU do not wish to extend their grant of rights beyond the 2024-25 athletic year can be viewed as both schools wanting to remain as flexible as possible. Or it could mean that neither school wants to be tied to the Big 12 for any longer than possible.

Think about Boren’s comments in September 2011. The Big 12 announced a six-year grant of rights by its member institutions. “These are very strong handcuffs,” Boren said then. “The grant of rights really does bind the conference together, and it shows that we fully intend to stay together.”

Nowadays? A grant-of-rights extension is “completely off the table” for Texas, according to a university source. That speaks volumes. And OU officials feel the same way, one source in Norman said.

“I just want to underline, there is no theological or abstract opposition to the grant of rights at the University of Oklahoma,” Boren said after the recent expansion decision. “We are committed to this conference.”

Texas President Gregory L. Fenves issued a statement that he was pleased with 10 schools and that he wanted to work with others “to make the Big 12 even stronger in the years to come.”

Nowhere in his statement did Fenves say Texas was committed to the Big 12 beyond the current contractual parameters, though.

Asked how Fenves acted during the expansion meetings, Bowlsby said, “Well, I’m not going to characterize what any one president was doing during the process. But our board was very engaged. There wasn’t a single president that wasn’t up to speed on the issues and not fully engaged in the conversation.”

Yes, Big 12 stability, or the lack thereof, is a real and serious issue. And it’ll be ongoing, unfortunately. Texas and OU will always control their own destinies, and everyone else will be on their own.

Golden: Baylor’s not looking past wounded Texas — for good reason