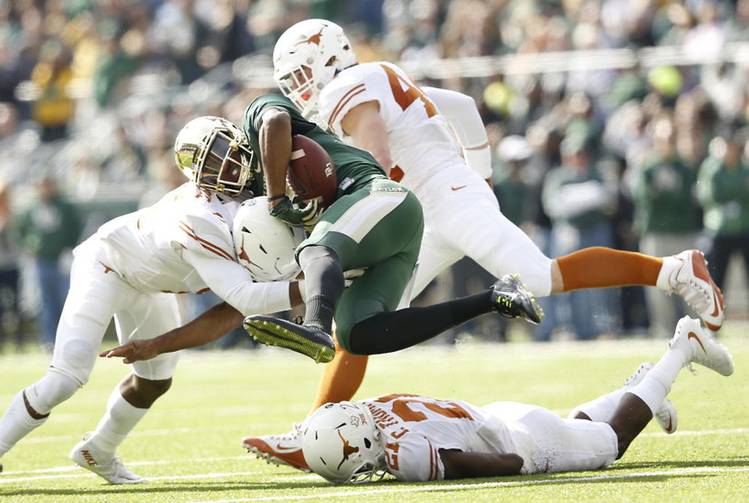 Baylor quarterback Chris Johnson loses a fumble after a hits from Texas defenders Duke Thomas and P.J. Locke III. Texas recovered for a turnover and Johnson left the game with an injury and at McLane Stadium, Dec. 5, 2015. (JAY JANNER / AMERICAN-STATESMAN)

The Texas Longhorns will answer the bell on Saturday.

OK, maybe they won’t. But it sure felt good to say it.

It seems much too early for Oct. 29, 2016 to be Charlie Strong’s last stand at Texas, but if the Longhorns bring their no-go road show home to Royal-Memorial Stadium, then darkness will descend upon our fair city.

It’s a serious situation, and livelihoods are at stake. Not just the coaches’, but the players’ as well.

It has to happen against Baylor. Chuck isn’t quite ready to meet his football maker because there are still five games remaining, but the clock is starting to tick.

Self-inflicted. That describes the 2016 Texas road experience in a nutshell. Before the second half of the season started, one glance at the schedule revealed a good road matchup against a Kansas State team that was banged up at quarterback and far from an offensive juggernaut at the skill positions compared to scarier offenses coming up like Baylor, Texas Tech and West Virginia.

But Texas choked. That’s the only way to describe a dropped pass in the end zone, a dropped fourth-down pass that may have gone for another six, a shanked 35-yard field goal at money time, and the inability to keep a simple hitch route for less than six yards.

Manhandled in Manhattan, that’s what they were. The Wildcats continued the program’s mastery of Texas. Strong was left to ponder yet another road loss as his office starts to take on the look of a funeral home.

The Strong era at Texas ain’t dead yet, but at 3-4 overall and just 1-3 in Big 12 play, the Longhorns are well past the nervous stage. I believed at the beginning of the season that Strong had to go 7-5 to keep his job and return for a fourth year. Texas will have to go 4-1 in its last five games to ensure that many regular-season wins.

Does this group have the look of a team getting ready for a 4-1 run in this conference? Hell no.

“Desperate” is an ugly word, but it’s an appropriate word. Texas has arrived there.

Go ahead and place the Longhorns in the role of the wounded animal on Saturday. The eighth-ranked Bears are coming here full of confidence with a 6-0 record and four wins over Texas in their last six meetings. On Monday, at the Baylor practice complex, I wanted to gauge the temperature on campus and see just how excited Baylor is at the idea of making their I-35 rival’s miserable season much worse.

Acting coach Jim Grobe spent the preseason answering questions about Title IX and the program’s role in the school’s sexual assault scandal near the end of the Art Briles era. But the talk has slowly turned in Waco to football, where Baylor is in play for a College Football Playoff berth despite some national analysts insisting the Bears’ weak non-conference schedule will keep them out of the final four.

Whether the Bears can run the table and get one of those four CFP spots is for another discussion. The emphasis on Monday was the Longhorns and how Baylor can avoid the role of slump-buster. When I asked Grobe about the danger of facing a wounded bunch that’s in desperate need of a win, his answer was probably what any of us would expect.

“Road games are tough,” Grobe said. “We saw that this weekend, for every team in the country going on the road is not easy. So I think it’s going to take a lot of focus. We’re playing a very talented, well-coached football team in Texas, and for us to go in there and play well is going to take great focus and (for us to) really play hard to have a chance.”

Baylor understands that a win over 2016 Texas won’t resonate like a win over 2009 Texas would; these Bears aren’t invulnerable, though, because they’re just not the offensive juggernaut that they were under their previous coach. Grobe is rightly concerned about trying to stop D’Onta Foreman, which no team has yet this season, and Shane Buechele’s ability to make plays in the passing game.

Those two will have to be the best offensive players on the field for the Horns to make this happen. And DKR must turn into a beehive.

“Every away game is going to be a hostile environment just because you have fans who don’t want you to win,” Baylor quarterback Seth Russell said. “With it being the Texas game, being a rivalry game, we’re expecting it to be a little more intense than the other games. We’re expecting that.”

Baylor is better on paper and has lofty goals in place, so the Bears have every incentive to come in here and hand it to the Horns. And I have no reason to believe Texas will get it done in its latest must-win game. But the home field has brought out the best in the Longhorns this season.

So I’m rolling with Texas on Saturday.

Golden: Will Horns follow up a huge home win with a road win?