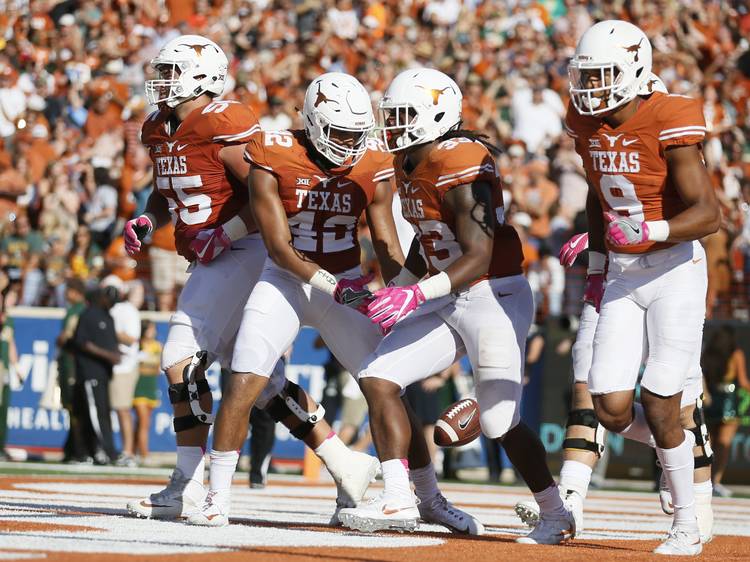 Texas is well past the moral victory stage.

The Horns need real victories from here on out.

They got one on Saturday.

They’re 4-4 overall and 2-3 in conference play, which is much better than they were at the start of business Saturday. Head coach Charlie Strong’s seat had gotten hotter after that bad showing at Kansas State, so any win is more than welcome these days.

Strong actually spoke about “the noise in the system” in his post-game presser, which I took to mean he’s tired of people talking about his office being under siege.

“It’s not a program in disarray like many of you think,” Strong said.

Regardless of what will happen moving forward, the Horns got a second win over a top-10 team in had-to-have-it fashion.

It was the competitive Texas team we expected to see every game at the beginning of the season:

Irony of ironies. When the Texas Longhorns come to play, they are always in the game. But they don’t always show up, particularly on the road. Thankfully for Bevo Nation, the Horns were playing in the friendly confines of Royal-Memorial Stadium.

One of these days they will decide to take this act on the road. Won’t that be something? Saturday brings with it a trip to Lubbock, where Texas Tech will be waiting. Another irony of ironies. Texas Tech is also in an up-and-down season and just delivered coach Kliff Kingsbury a huge road win at TCU.

If you thought Manhattan was tough, wait until they get to Lubbock.

“We have to play better on the road,” Strong said. “It’s our Achilles’ heel.”

Strong’s office hasn’t been a safe haven of contentment in Year 3, especially since the Longhorns have yet to show themselves capable of winning away from home. But for at least one night, there was joy at Bellmont.

The Horns showed resiliency. They overcame a Baylor running attack that stepped off 398 yards on the ground. They overcame the wonderful all-around play of quarterback Seth Russell, who ran for 138 yards and passed for another 226.

Shoot, they even overcame the worst play-calling of Sterlin Gilbert’s Texas tenure. Did Gilbert’s dog eat his playbook the night before the game? Twice at winning time he lined up his best player — D’Onta Foreman, who ran for 250 yards — at wide receiver for the far less effective Tyrone Swoopes. Twice the plays came up empty.

It was the classic case of a smart guy out-thinking himself.  The 18-Wheeler package needs an overhaul or maybe a spot in a nice garage somewhere. Defenses are on to what the Horns are doing out of that formation, and since there’s obviously no wrinkles added to it (like a pass), then why do it when no team has been able to slow down your NFL-quality running back?

With that said, give credit where credit is due. Buechele’s two best throws of the day were also two of the most clutch. Both went to Armanti Foreman, and unlike last week, he held on to each one, including the big one, that 39-yarder that set up Trent Domingue’s game-winning field goal.

It’s the type of bounce-back the Horns are going to need to make it to a bowl game. It was a true college try by players who know they’re capable of bringing it on a more consistent basis.

Strong is still waiting for his team to pack its defense in a true road game.

Lubbock would be the perfect venue.

Golden: Baylor’s not looking past wounded Texas — for good reason