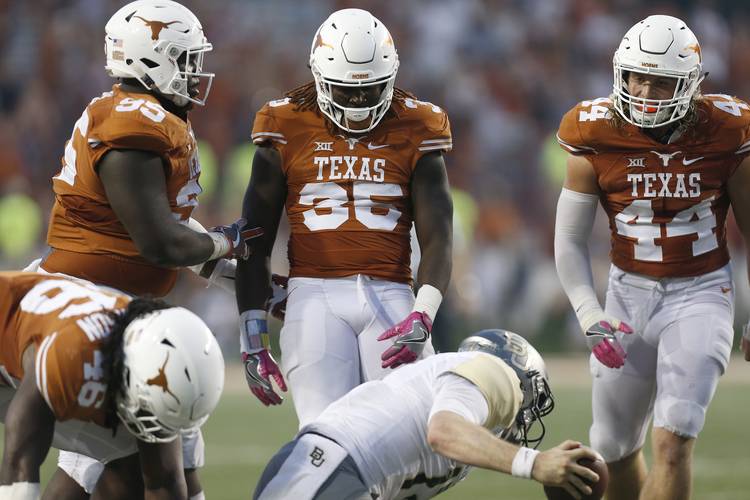 It’s time for the animal to come out of the Texas Longhorns.

Some dog, to be exact.

Texas has to embrace its inner canine to make this thing pop in the last four games. If the Horns want to play in a bowl game and silence the critics of their beloved head coach, the will have to get down and dirty in Lubbock. They will need more bite than bark against the nation’s leading passer, Patrick Mahomes. Anything less will lead to a loss.

So what I do mean by dog?

Charlie Strong has had only one good defense in his two-plus seasons — the 2014 group that was led by Quandre Diggs, Jordan Hicks and Malcom Brown. Each one has become an NFL starter. Three others on that defense have also played in the league.

Diggs was Strong’s on-field coach on defense. Before the Oklahoma game that year, the feisty corner who now plays for the Detroit Lions mentioned that he thought the locker room was missing something. “I know guys are young, but that’s no excuse,” he said. “My freshman year I had that mentality, but I guess everybody don’t have that dog in them.”

What he meant was that the Horns were lacking that one intangible that can be the difference in winning or losing in a hostile environment. Texas went to Lubbock that season and blew out Texas Tech, 34-13. Diggs was one of the defensive stars with a big hit that knocked then-freshman quarterback Patrick Mahomes out of action.

It stands as perhaps Texas’ most complete road performance under Strong to date.

Spin ahead two years, and the Longhorns haven’t shown a collective dog mentality on the road in a minute. They didn’t show up defensively in Stillwater or Manhattan. Looking back, the last time a Texas team came out and hit a respected road opponent in the mouth was the 2015 season finale, when it took a 17-0 first quarter lead at Baylor.

There’s been a genuine lack of dog away from home. Someone has to get off that plane frothing at the mouth and ready to sink sharp fangs into opposing jugulars.

“Everyone has an inner dog in them,” said defensive tackle Paul Boyette, Jr. “It’s about having self-pride and manning up and knowing your opponent, really. I have to come to come out and play lights out and give an extreme effort. I have to keep leading them and let them know the atmosphere in Lubbock will be crazy, especially with the (frozen) tortillas being thrown at you.”

Boyette has been a nice leader, but it all starts with the coaching staff. If that group brings the right preparation and the right intensity, dog will emerge on the field.

Strong will have to be the lead dog. If it means taking some risks early to send the right message to his team, so be it. If it means overruling offensive coordinator Sterlin Gilbert when he lines up D’Onta Foreman out wide, do it. If it means parking the 18-Wheeler package if Tyrone Swoopes isn’t trucking guys in short yardage, so be it.

Linebacker Malik Jefferson has to be one of the biggest dogs. That means picking up where he left off against Baylor. That means becoming the consistent playmaker many thought he would be when he was named a freshman All-American. That means forgetting about recent perception and making some new memories.

Breckyn Hager has to remember he’s still a dog. He’s pretty, but plays with the intensity of a hungry street mutt who sleeps in a flea-infested junkyard. His comments about wanting to injure Mahomes were ill-timed and inappropriate, but make no mistake, those came from the side of the brain that’s needed to go into Lubbock and get a win. They need more like him.

Boyette is a dog, as is Chris Nelson, but they have to be be road dogs of the highest order. Both have often played their best games when the defense has struggled. Neither is afraid to challenge teammates and more important, they aren’t afraid to challenge themselves.

“You already know I’m a dog,” said Nelson, who will have to take over the leadership up front with Boyette finishing up. “When it comes to the field, the light switch is on.”

Most important, the secondary has to play like a bunch of dingoes. That means not allowing short routes to become long touchdowns. That means coming up with an interception or two. That means bringing a Diggs effort, playing with an enormous chip on their shoulder.

By Saturday night, we’ll know if this fan base is rolling with big dogs or lamenting yet another dog-day afternoon on the road.

Bohls: Are the Longhorns road warriors … or just road weary?

Eyes on Texas: Forget the tortillas, Texas has turned things around in Lubbock