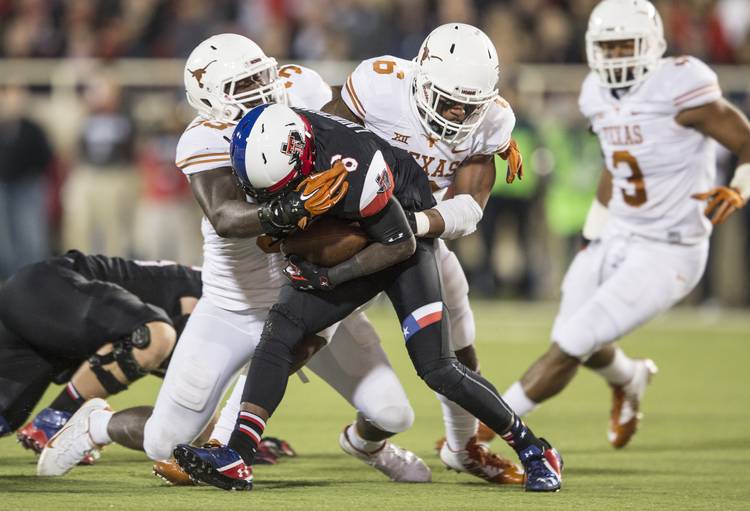 For all the hubbub in the Hub City about tortilla-tossing Texas Tech fans, something seems to have gotten lost. Texas actually plays pretty well at Jones AT&T Stadium.

And the recent wins helped cool some hot seats.

If Blake Gideon catches that interception against Tech in 2008, the Longhorns are playing for another national title. But Gideon made up for it two years later with a first-half pick in what became a relatively easy 24-14 win.

“We know how tough it is to win in Lubbock,” then-UT coach Mack Brown said. “We’re excited about how tough we were tonight.”

In 2012, Texas had been blown out by rival Oklahoma and didn’t look all that impressive in wins over Baylor and Kansas. The Horns went to Lubbock as 7 1/2-point underdogs, having lost nine straight games to Top 25 opponents. David Ash and Mike Davis hooked up for 165 yards and two scores as Texas blasted No. 20 Tech, 31-22. At that time, Texas was 7-2 but the water-cooler talk about Brown’s status had already begun.

“I came to Texas to win every game, not six,” Kenny Vaccaro said afterward. “I want to get this team back to where it was. Not necessarily BCS, but back on track. That’s the goal.”

After leaving Lubbock, Texas finished the season with a 9-4 record and a thrilling 31-27 upset over No. 15 Oregon State in the Alamo Bowl. Brown wouldn’t run into any trouble again until the following September.

First-year coach Charlie Strong probably didn’t know exactly what he was headed into in 2014.

With a 3-5 record after his first eight games, Strong needed a win in the worst way imaginable. At that time, there was real wonder if the Horns would even qualify for a bowl game.

“It just wouldn’t kill us. It would kill the program,” senior leader Quandre Diggs said. “It’s definitely not anything you should expect at the University of Texas for you to not make the bowl game. That’s the bare minimum. There’s no way you should settle for that.”

Diggs backed up his talk on the field. He came roaring through the line of scrimmage and knocked out then-backup quarterback Patrick Mahomes with a shoulder blow. Receiver John Harris had a career-high 165 receiving yards on five catches, and several members of the secondary, most notably Duke Thomas, had terrific nights in a 34-13 win.

Watching the players bounce around the visiting team tunnel was a sight to behold. In a difficult season, Texas football was fun again.

Diggs was asked if he felt bad about knocking Mahomes out of the game. “Nah, he signed up to play football. Sometimes that happens.”

Diggs’ hit, and the win in Lubbock, was a true transformational moment. Texas came home to beat No. 24 West Virginia and then went to Stillwater and trounced an Oklahoma State team that laid down on coach Mike Gundy. The Horns had their six wins and went bowling.

“There was a lot of frustration built up,” linebacker Jordan Hicks said. “You can call it what you want, but it always feels good to get a win.”

This time around, Strong’s Longhorns are 4-4. Just like Brown was in 2012, Strong is sitting on an extremely hot seat. Mahomes is back, only this time, he’s the nation’s No. 1 passer and the only FBS quarterback averaging more than 400 yards per game.

By all indications, Texas President Gregory L. Fenves does not want to change football coaches, although his hand may get forced. Strong lashed out at reporters and critics — well, in his own way — after last week’s Baylor win. Strong said the program wasn’t in disarray and the noise is “an embarrassment to everyone.”

He stepped away from that topic on Monday. “Now I think that enough has been said, and so let’s just move on to Tech and get ready,” Strong said. “I think our players, they understand what’s at hand.”

Lubbock is a place where Texas can make some real noise, and rest assured Red Raiders fans will be making plenty of their own, too.

If recent history is any indication, a Texas win on Saturday may be the perfect springboard to a stellar November finish. Just what Charlie Strong needs.